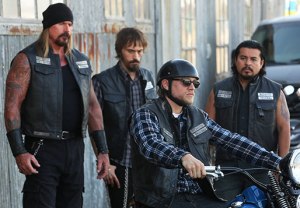 According to Sons of Anarchy executive producer and director Paris Barclay, there is a cardinal rule for crafting a great series finale: Don’t leave the audience hanging, under any circumstances.

“I don’t like when I read a book and I invest in hundreds and hundreds of pages, and then you end and it’s like, ‘What? I’m supposed to just think about something? I don’t want to think about something,”” Barclay says, laughing, when asked if there were ever discussion of an ambiguous end for the series.

The series finale — recapped in full here — found Jax leaving SAMCRO behind for good (after racking up a few more casualties, including Barosky and August Marks), before taking his own life in a collision with a semi truck.

“From the very first weeks in the writers’ room, when Kurt laid out the big arc of the story, we knew this was where we were going,” Barclay says. “Everyone wanted it to be as satisfying as possible.”

Still, some questions were left unanswered: Does Abel’s fascination with his dad’s club ring mean the boy is destined for the SAMCRO life anyway? Who is that homeless woman? Is it possible that baby dolls have never been creepier than during Connor Malone’s epic car chase with the Sons?

Below, Barclay discusses all those points — and tells us which Sons moments will stick with him for quite some time.

TVLINE | How early in the season did you and showrunner Kurt Sutter discuss if and how Jax would die?
It was always sort of pre-ordained. We’re telling a tragedy, and it has Shakespearean overtones and undertones. If you’re telling a tragedy, it doesn’t end happily ever after. It just doesn’t. Anyone who is watching the show and is feeling what’s going on would probably not have been satisfied — despite what they say — if Jax just went to prison or just alerted the authorities and went to become a lumberjack. That kind of character has to end. I think we all did it really well.

TVLINE | Jax never really learned about Gemma’s involvement with his dad’s death, and when he burns John’s manuscripts, that entire chapter closes, in a way. Was it a conscious decision not to make that a big focus of the finale?
Yes. If you listen to what Jax is saying at the wall, it’s still somewhat ambiguous as to whether he believes what Jury says — which is that JT killed himself — as opposed to the story of what Gemma and Clay colluded on. But both are moot, because Gemma and Clay are now both dead. And whether or not this actually happened in the past isn’t affecting Jax now. Jax is now looking forward, he’s thinking, “What’s the best way to take care of my kids? Will the club be OK?” He’s cleaning things up for the club and setting everything in place for Chibs. He knows the best way to leave his family and to keep his boys out of this life is by creating a character, or a memory, that they will hate. And that’s what he goes about doing.

TVLINE | Plus, Jax seems so at peace with his fate throughout the hour. It’d be strange for him to dwell on something that’s so far in the past.
Exactly. I love what Charlie [Hunnam] was talking about on Anarchy Afterword. It really was a three-episode miniseries. From Episode 11 when he finds out from Juice what happened, to 12 when everything starts in motion with the killing of Gemma and Unser, and then the conclusion in 13 — I think Charlie’s performance was in a zone. From his crushedness of the Juice moment to the resignation and resolution of what he has to do, and putting the plan in motion. It was just fantastic. 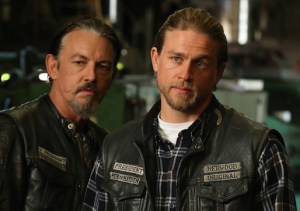 TVLINE | I’d love to break down a few specific scenes from the finale. First, Jax finally visits Tara’s grave, and his scene at Tara and Opie’s plots is so understated. What was it like to film that scene?
That was actually one of the first days that Kurt was hospitalized [for an appendectomy]. I had to step in, but Kurt had already designed the shots that he wanted and the action that he wanted to do. I was there more to witness it and make sure that we got what Kurt wanted; nevertheless, it just broke my heart. With Charlie, it’s basically the action, the physical position of his body… And then you just put the camera where you can watch him, and with each take, he does something a little differently. In only one take does he brush the stuff off the top and kiss the headstone in that way, leaning his body in that way. He’s a very inventive and original person. How he does things — the speed at which he puts down his marriage ring — tiny things like that vary from take to take. And I just printed everything that we shot, so when Kurt got into the editing room, he would see everything that happened that day and could choose how to put it together. He put it together just spectacularly.

TVLINE | Another standout scene was that insane car chase between Connor and the Sons. It was so long and so complex.
And so crazy! [Laughs]

TVLINE | How did that come together?
It took at least a full day and a half of just second unit driving. It was on four different locations. It was just crazy. It was one of the biggest things we’ve ever done, and people sort of forget it in the episode, because so much else happens. It gets eclipsed, but it was one of the more elaborate things we’ve ever done, and it took a lot of planning. The real fun of it was our stunt coordinator had to figure out how to do impossible things. Hitting those dolls and having them fall on the cars, and then fall off the cars — it’s a lot more complicated than it looks. Driving that vehicle that Connor was driving right through an opening that exactly fits it — Connor isn’t sure whether he’ll rip the sides out of it or not! [Laughs] Those things take a lot of calculus. And each of those shots is a couple hours. It was really one of the most elaborate things we did and most fun.

TVLINE | Here’s something a little more ambiguous: that shot of Abel twisting Jax’s club ring. What was the intended significance there? Can we assume Abel grows up in the club lifestyle regardless?
You can interpret that as the child doesn’t know what the story is yet. He’s just been given this ring, and he’s being driven away. And a lot of people said, “This means he’s going to become a Son ’cause that’s what Gemma wants and she’s pre-ordained it!” I’m not so sure. Right now, it means he has a ring and he’s playing with it. But it’s there to add to that conversation. It’s there to conclude the story in a way that has a look of questioning. And more than the twisting of the ring, it’s the way he looks out the window. To me, that tells me more, because there’s a longing and an understanding that things are going to change, but he hasn’t been explained how they’re going to change yet. It’s just wonderful. But don’t expect that there will be a Sons 2. [Laughs]

TVLINE | I also really enjoyed Jax’s final scene with the homeless woman. She says, “It’s time,” and they both just seem so peaceful.
I have my theory as to what that means. But as Kurt said in Anarchy Afterword, everyone should develop their own theory. She may be part Grim Reaper, she may be a spiritual guide. She’s in a lot of different places that it seems impossible to get to without a car. [Laughs] She’s not going to ride around in her cart from place to place. Is she an apparition? I don’t know, because Gemma also saw her. It’s there to raise those questions and to be part of the larger mythological story that we’re doing. And some people have said, “Well, that’s just not real,” and I say, “Well, you’re watching a TV show. It’s not real.” It’s a story that’s constructed to create certain feelings, and that’s what that lady is all about. I do love that something like her bread ends up on the side of the road at the end.

TVLINE | A few of our readers have mentioned that bread, wondering if there might be biblical connotations at play.
I would say that’s not an unreasonable interpretation. [Laughs]

TVLINE | Obviously, this finale — and the entire season — was full of emotional moments. Was there a scene or moment that hit you particularly hard?
Nothing quite destroyed me like Gemma’s death and the actual filming of it. The performance that [Charlie and Katey Sagal] gave — it was the pinnacle of the acting-and-directing combination that I live for. But the subtle moment that was probably the most beautiful scene we did all season was between Tig and Venus in Episode 10. Their love scene, when they just sat across from each other — it was so beautifully written and shows you the depth that Kurt Sutter can deliver. They were so proud to do it, and the crew just stood up and clapped for them for a solid minute-and-a-half when it was done. They were so moved by that. Those two things are the moments I’ll always take away from this season.

Sons fans, are you still reeling from last night’s finale? Hit the comments with your latest thoughts on the episode.