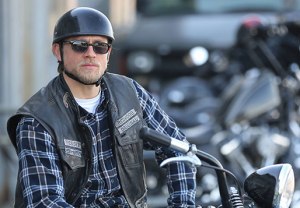 We walked into Sons of Anarchy‘s series finale with quite a few unanswered questions. And although it wasn’t neat and tidy, those loose ends were tied up by the end of the 113-minute broadcast.

Who lived? Who died? What became of the war on the streets, which came to a head during last week’s penultimate episode?

Read on for the highlights — and some of those answers — from Sons‘ final ride:

* There have been a few key moments we’ve been eagerly awaiting all season, and Jax visiting Tara’s grave ranks high on that list. At the start of the hour, Jax finally visits his wife’s plot (as well as Opie’s), kissing the headstone before leaving his wedding band at Tara’s grave and his SAMCRO rings at Opie’s.

* In one of the episode’s happiest moments — relatively speaking, that is — the SAMCRO brothers vote unanimously to make Grim Bastards prez T.O. one of their own. There’s laughing, there’s table-pounding, there’s plenty of hugging — and I have a sinking feeling it’s the last time Sons will be even remotely light-hearted.

* To tie up loose ends with the Irish, the Sons murder Declan and Brendan Roarke, before offering Connor Malone a new business plan for his shady gun deals.

* Before Nero, Wendy and the boys take off for Norco, Jax sadly informs Nero that Gemma is dead at his hands. What follows is an absolutely heartbreaking scene, as Jax says goodbye to his boys for the last time. (Say what you will about Evan and Ryder Londo, but they know how to deliver a gut-wrenching, “Love you, Daddy.”)

* Jarry and Chibs end their steamy, corrupt love affair, and it’s anything but amiable. Through gritted teeth, Chibs informs the sheriff that cops who get on the wrong side of SAMCRO “tend to go away.” His response when Jarry asks if he’s threatening her? “Don’t have to. History doesn’t lie.”

* Two of the series’ quickest kills arrive minutes apart: Jax fatally shoots both Barosky and August Marks. The latter death gets an assist from the show’s recurring homeless woman, who tells Jax “it’s time” before offering him her blanket (which he uses to camouflage himself before killing Marks. Smooth!).

* After a devastating Mayhem vote, in which all of Jax’s brothers agree their president should meet Mr. Mayhem, Jax gives his prez patch to Chibs (who makes Tig the new VP). But the SAMCRO brothers can’t go through with killing Jax themselves: They merely wound Happy, allowing Jax to ride off on his dad’s bike.

* Jax visits his old man’s place of death, confessing to John that it was “too late” for Jax to get out. When he’s found by a California Highway Patrol officer, Jax shoots at the cop, before taking off on another chase that collects more and more officers on Jax’s tail. Just as the chase reaches its height, Jax drives himself head-on into a truck — driven by none other than Gemma’s roadside companion from last week, Milo. Though we don’t see the moment of collision, we spy Jax’s blood on the road beside the crash.

* Fittingly — since the drama has drawn Hamlet comparisons throughout its run — a bittersweet Shakespeare quote is the last thing we see before the episode comes to a close.

What did you think of Sons‘ series finale? Were you satisfied with each character’s fate? Grade the episode in our poll below, then hit the comments to back up your choice.