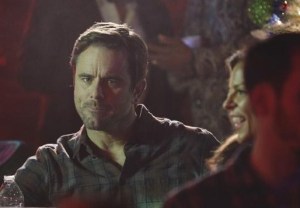 All the Nashville fall finale teases in the world aren’t as telling as this one, courtesy of Charles Esten‘s wife, Patty.

“Sometimes my wife reads the script before I do,” the actor tells TVLine. And when she flipped through the pages of the fall finale episode, which airs Wednesday (ABC, 10/9c), “from the other room, I hear, ‘Oh my God!’ So that always means there’s something about to happen. This was one where she made a little noise from the other room, like a gasp.”

He adds with a laugh: “That can sometimes be a good barometer, and in this case, it was.”

The hour picks up a few weeks after Deacon confessed his unending love for Rayna… who reasserted that she’s marrying Luke and Deke needs to get over it. But Esten tells TVLine it’s not that simple — and it may never be.

The actor repeatedly apologizes for being “absolutely handcuffed” by not being able to reveal much of what happens in the episode, but he did have a lot to say about how Rayna and Deacon’s relationship is entering a new phase. (Don’t worry, we’ll get to that troubling scene in the promo, which shows the recovering alcoholic unconscious near some bottles of booze, in just a moment).

We’ve heard Deacon profess his devotion to Rayna before, but last week’s monologue was markedly different — and for good reason, Esten says.

“Deacon is processing pain and loss and trouble a lot better than he used to,” he says, lapsing into speaking for his character. “I have a connection that I am admitting. I think she has it, too, but she’s not admitting it… She’s fought her way through it, doing the ‘smart’ thing, the right thing, the best thing for her.”

So when Deke told his ex to do what she thinks is best — though nothing she does will sway his feelings for her — “that’s not what she wanted to hear,” Esten says, laughing. “Which is why it didn’t go well.”

Still, the Rolling Stone article was “a real gut punch” to the bandleader. “When you’re in the public eye or when you’re near somebody who’s in the real heat and light of the public eye, there’s collateral damage,” he says. “You can get hurt from having a life with them.”

That’s why, Esten says, despite Deacon’s feelings for the redhead, he doggedly peeled her tour sticker off his guitar case at the end of last week’s episode.

“That Rayna Jaymes sticker on that guitar case was there in Season 1. It already looked old in the pilot,” Esten says with a laugh. “Every time I picked up my guitar, there it was. It was like a symbol, this faded sticker that’s barely hanging onto this old guitar case: That’s Deacon.”

In the spirit of moving on, Deacon decides to spend this week’s episode in Memphis after Luke’s tour wraps there. It’s a way to avoid the insanity of the Ruke wedding taking over Nashville, and Scarlett tags along.

Of course, the pair winds up singing a duet — and for a change, it’s a lighthearted moment during a fun night on the town.

“We sure known how to pour our hearts out in a brooding, darker way as these characters,” he says. “So to have us up there just having a flat-out ball was really exhilarating.”

Now, about that visual of Deacon lying on the floor…

“Unfortunately, sometimes right when you think [you’re in control of an addiction] is when you’re the most vulnerable,” Esten says, choosing his words carefully. He adds that even in Memphis, Deacon can’t escape media coverage of his true love marrying another man.

“There’s no getting away from that wedding, no matter what city you’re in. So that makes it harder, for sure.”