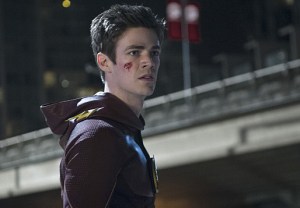 With its first winter finale, The CW’s The Flash “went there” on multiple occasions, including a final wrinkle that certainly zagged when I thought they would zig.

Almost right off the bat, the episode introduced us (as well as a few unlucky guards) to “The Man in the Yellow Suit,” whom from here on we’ll simply dub Reverse-Flash. When Barry and Joe hear of the eyewitness’ account, they realize they’re dealing with the same man who killed Nora, as well as gave Joe a spook a few weeks back.

Barry gets an up-close look at Reverse-Flash himself when the lemony speedster lures him to a football field for a rough scrimmage. “I’m always one step ahead,” Reverse-Flash taunts, in a distorted voice. “Your destiny is to lose to me, just as your mother’s destiny was to die that night.” Rude.

While Dr. Wells and his team prepare a trap for Reverse-Flash — baiting him with tachyons aka superluminal particles aka I still have no idea what they are, to be procured from Mercury Labs’ Tina McGee (Amanda Pays, reprising her role from the 1990s’ Flash) — Barry tends to a bit of personal business. After gifting Iris with a replica of her mother’s wedding band, an irked Eddie suspected aloud to Iris that Barry has feelings for her. But after denying it once, and following an intense heart-to-heart with incarcerated Dad, Barry takes his heart and slaps it onto his sleeve, telling Iris that he has loved her since before he even knew what the word “love” meant. But after losing so much in his life, and no matter how many times he thought to tell her, he held back, for fear of losing her, too. “I couldn’t lie to you anymore,” he says, as Iris pumps out a few tears. “I’m sorry.”

Not to be left out of the winter finale drama, Caitlin catches glimpse of a straggly, grimy homeless man who might be her dead fiance, so she follows him into a dark corner of the parking garage, to no avail. Later, Cisco helps her track “the burning man” from Iris’ blog, but the metahuman insists he’s not Ronnie but “Firestorm.” After the unsettling and highly unexpected encounter, Caitlin laments that for so long she imagined what she would trade for one more minute with Ronnie; now, seeing him, she wishes he had just died that day.

Later, the trap is set at S.T.A.R. Labs, and with Eddie and his task force and Joe looking on, Dr. Wells catches himself a Reverse-Flash. When asked what he wants, Reverse-Flash tells Wells that his goals are beyond the good doc’s understanding. He then shrugs off any Flash comparisons, saying: “I’m not like him at all. In fact, you could say I’m the reverse.” When the force field begins to yield, Reverse-Flash yanks Wells into the cage and begins pummeling him. Joe disables the force field, freeing Reverse-Flash to KO Eddie’ tact team and go Joe. Signaled by Caitlin, The Flash races to the scene, saves Joe and brings his opposite out into the parking lot for a brawl. Reverse-Flash again easily gets the better of Barry, until Firestorm shows up and breaks things up with some fireballs. Reverse-Flash scrams, careful not slip in his own piddle, while Firestorm warns Caitlin never to look for him again.

In the aftermath, Joe reads in Eddie on the metahumans sitch (but only IDs The Flash as “the guy who saved both our lives tonight”), while Dr. Wells scolds Caitlin and Cisco for keeping Ronnie’s status a secret. (Is someone feeling…. burned, doc?) Later with Joe, a defeated Barry shares, “I’ve been afraid of the Man in Yellow my whole life, that’s why I lost.” Joe urges Barry not to lose the light that he brings to other people’s lives. As he puts it, through some tears, “The world may need The Flash, but I need my Barry Allen.” OK, it just got dusty in here.

The hour ends with a Christmas gathering at the Wests’, where Barry congrats Eddie and Iris on moving in together and Cisco notes to Joe that based on what he saw of the Flashes’ fight, there must have been two speedsters in the living room when Nora died. So who’s the other red Flash?

Well, it’s not Dr. Wells — though that was my theory for at least 7 seconds there. Instead, Wells uses a Flash-crested ring to access a secret closet inside his secret room, inside of which is… the Reverse-Flash costume. After attaching a tachyron to the suit, Wells wishes Berry a Merry Christmas — in Reverse-Flash’s telltale voice.

What did you think of The Flash‘s winter finale?