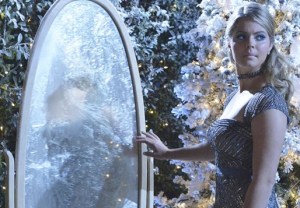 Emily and Paige’s relationship also took a pretty serious nosedive, but as Emily said — and as Shay Mitchell told us earlier this week — Paily “will always have a special connection.”

ALI’S ARMY | Never one for subtlety, Alison arrived at the ice ball with her entire new crew in tow, which included two very familiar faces: Sydney, who’s “not gay,” and Jenna! The masked ladies told Emily they’re only following Ali’s lead because they fear her — and they’re pretty sure she killed Mona — but do we trust them? Do we trust anyone? We certainly don’t trust Cece Drake, who also made a cameo at the ice ball to warn Alison that her former “friends” are on to her.

A NEW CONNECTION | While the rest of the liars were ballin’ for charity, Spencer and Hanna broke into Alison’s house — because everyone on this show is a criminal — to search for anything that might connect her to Mona’s murder. In addition to a near-death experience with a knife-wielding “A,” Hanna also discovered a letter proving that not only did Ali know Bethany, but she invited her to Rosewood for Labor Day. Toby claimed that’s enough of a link to clear Spencer’s name, but I’m not holding my breath.

WHAT THE HELL? | The rest of the hour was devoted to Ali’s ghostly visit from Mona, who helped her remember the first lie she ever told: When Alison was a little girl, she found two dresses at Christmas, but her mom made her lie and say she only found one. So, who was the other dress for? Bethany? Ali’s twin? We didn’t get an answer — surprise, surprise — but we did get a creepy peek into Ali’s future, complete with ghosts and demons. (I can’t believe Alison even asked, “Am I going to hell?” Like, girl… of course you are.) But who was Mrs. D talking about when she said, “They’ll be coming for you”? I’m getting major Ravenswood flashbacks right now.

So, PLL-ers, was this Christmas special worth the hype? What new theories have you hatched after all this holiday sleuthing? Grade the episode below, then drop your thoughts in a comment.