A few Mindy Project episodes back, Danny snooped in Mindy’s diary and learned that she expected a marriage proposal by Christmas. So… does Diamond Dan stay true to his stripper moniker and show up with something shiny?

The short answer: No. But before you throw your Wreath Witherspoon across the room in protest, let’s review what happens in “Christmas.”

LAST CHRISTMAS, I GAVE YOU MY HEART | This Christmas, Mindy expects far more than the stellar, surprising Aaliyah dance routine Danny gave her last year: She wants an engagement ring, and she goes as far as piecing together shreds of his credit card bill to figure out whether he’s bought one. When she sees a sizable purchase listed at Forever Stones, you can almost see the little David Tuteras circling her head. Later, when Mindy overhears Danny on a phone call discussing settings, stones and his girlfriend, she’s sure she’s about to be asked to be the new Mrs. Castellano.

So that’s why she doesn’t take Dr. Fishman’s suggestion about applying to an eight-month fellowship in San Francisco seriously at first: Why would she leave Danny at such a huge juncture in their lives? But over dinner at Babbo (side note: insert Homer Simpson-esque drooling here), he reveals that Forever Stones is a headstone company: He’s bought a plot for himself — only — and is excited to show her.

REC WRECKED | Mindy? Not as excited. So she applies for the fellowship, telling Danny that if they’re not engaged, what’s the big deal if she goes away for a little while to further her career? While Mindy goes about getting recommendations to send in with her application, Peter convinces Danny that Mindy really is just forcing his hand: “Buddy, you’re in a proposal trap.” So Danny sabotages Mindy’s application by telling Dr. Ledreau she’s not serious about wanting to go to ‘Frisco. (Side note: ARRRGH Danny, sometimes it is difficult to remember why we love you. Do that “American Woman” routine again to try to jog my memory, OK?)

Mindy receives news of Ledreau’s rejection at the office’s “elegant” (per Jeremy) holiday party, but she wipes her tears and pulls it together to give Danny his Secret Santa gift: a Ken Burns-style documentary about Dr. C, complete with a cameo by the accomplished director himself. Danny’s so moved, he races out of the office and winds up at Annette’s, demanding that she give him her engagement ring so he can put things right with Mindy.

Bless her sorta racist heart, Annette helps her son realize that proposing isn’t the answer; fixing what he messed up is. So Danny hunts down Dr. Fishman (in an all-female live nativity) to write one of Mindy’s recommendations, and he pens one, too. So when Danny reunites later with his girlfriend, he helps her see that the fellowship isn’t a lost cause — though we never see him own up to tanking Dr. Ledreau’s letter — and a flash-forward shows up that she does, indeed, get accepted into the program. San Francisco, here we come! 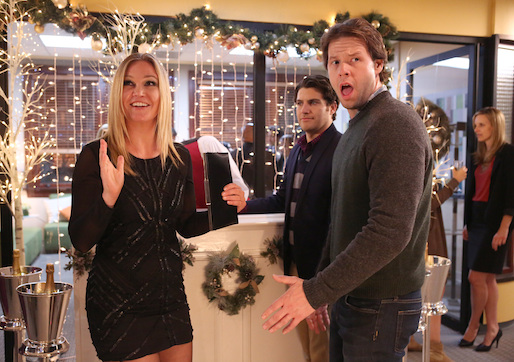 HOARDING OUT FOR A HERO | The evening’s side plot involves Danny setting one of his doctor friends Jessica (played by Save the Last Dance‘s Julia Stiles) up with Peter… but she mistakenly thinks Morgan is Dr. Prentiss, a fact that Nurse Tookers doesn’t realize until they’ve slept together. Did I mention she’s a hoarder (though her apartment looks like The Ritz-Carlton compared to your average Hoarders participant’s place)?

The truth about Morgan’s identity comes out at the office party, but Jessica later decides that she’ll give the weirdo another shot. (I have loved Stiles since she taught me I could do if only I put my back into it, so I’d love to see her back for another Mindy Project turn.)