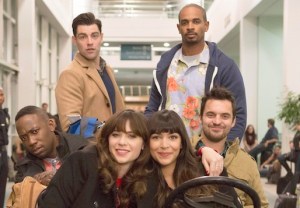 ‘Twas some time before Christmas, and all through the ‘port, New Girl roomies were waiting, some at the food court.”

As its title suggests, this year’s holiday episode/fall finale of the Fox comedy, “LAXmas,” takes place at the bustling transportation hub as Jess, her pals and the rest of the California try to get to their destinations before Santa does. But are they successful? Read on to find out!

LIFE’S RICH PAGEANT | Jess and Ryan sneak away from their school’s inexplicably dark Christmas pageant (think an elf bemoaning a gingerbread man’s ripped-off arm) to make out in the closet. “All this sneaking around — I feel like gay guys in the ’50s,” Jess muses. They grouse about the fact that they’ll be separated when he goes home to England for the holiday… which leads him to offer an impromptu invitation to his family’s home.

JESS TO THE RESCUE | Jess says yes (because, Julian Morris), meaning that the gang’s Christmas travel plans look something like this: Jess, London; Cece, Manhattan; Schmidt, Long Island; Nick and Winston, Chicago; Coach, Hawaii — though he feels conflicted about missing out on spending the holiday with his little niece.

After an awkward in-episode plug for the Ford Fusion, everyone drives to the airport to find that it’s bedlam: A storm in the Midwest has frakked with everyone’s travel plans. Jess manages to smooth things out for Schmidt, Cece and Coach (side note: They’re adults, right? Why can’t they deal with their own travel snags?) but runs into static when trying to get Winston and Nick bumped up on the standby list for a flight to the Windy City.

When a bitchy gate agent (played by Billy on the Street‘s Billy Eichner) refuses to succumb to her polite charm and she receives a text from Ryan indicating that his family lives on a grand estate, Jess is laid low. She texts her employee/bed buddy that her flight was cancelled and she won’t be coming to Christmas across the pond. And after a “reverse Santa” steals her bag of gifts for Ryan’s family, even Eichner’s antisocial airline rep takes pity on her and puts Nick and Winston in first class on the Chicago flight.

ALL UP IN DA CLUB | Meanwhile, Schmidt and Cece hang out in the airline’s elite club, where a distinguished looking businessman (played by Barry Bostwick, Cougar Town) offers Schmidt his club-access pass in exchange for “a run at” Ms. Parekh. Though Schmidt had idolized the man for the few minutes he’d known him, he loudly rejects the offer and proudly identifies himself as a Long Island native by yelling things like “516!” and “Billy Joel!” In the food court later, Cece warmly says she likes being Schmidt’s friend, and though it’s clearly not the relationship he wants with her, he agrees.

MISSED CONNECTIONS | Before takeoff, Nick calls Jess and, after a little cajoling, gets her to admit that she didn’t board the London flight because she doesn’t feel good enough for Ryan’s fancy family. So Miller rallies the rest of the gang to find her just before she leaves, and they strong-arm her into getting on the plan and seeing her (very charming, very smart, very accepting, seriously why is there even any question about this?) new man. “We’re not getting on our flights unless you get on yours,” Winston says, kicking off a mad dash to get Jess to the gate as She & Him’s cover of “God Only Knows” plays in the background. (Love Actually IS all around!)

That taken care of, Nick and Winston squeeze onto another Chicago flight, Schmidt and Cece head for  the Big Apple, Coach skips Hawaii in favor of home and Jess lands in London and calls Ryan… who’s standing outside of her apartment building, because he hopped a plane to Los Angeles when she said she wouldn’t be coming. Know what you should have given him for the holiday, Jess? A freaking phone call saying you got on a flight!

Now it’s your turn. Thoughts on the fall finale? Sound off in the comments!