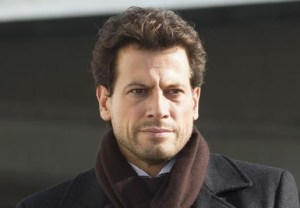 Remember how it took The Mentalist nearly six seasons to let us know who Red John was?

Forever fans won’t even have to wait 12 episodes to learn who’s behind the mysterious calls Henry has been receiving since the ABC drama’s pilot.

If the reveal — which takes place in Tuesday’s midseason finale (10/9c) — seems like it arrived quickly, you’re in good company.

“It was a bit of a shock to me that we would do it so early in the process,” star Ioan Gruffudd tells TVLine. “I was imagining that there would be something to that effect toward the end of the season.”

But the actor adds that once audiences see the caller, a man who refers to himself as “Adam” and claims to be immortal like Henry, the storytelling possibilities deepen.

“If you think about it, now we can go back in time and see the character in my past several times over, and have the fun and enjoyment of the audiences knowing he’s the mystery caller but Henry not knowing,” Gruffudd says. “There is a lot of scope there.”

Plus, “as much as it’s been a thorn in Henry’s side from the beginning of this show, now he’s got a chance to put a face to it, to see how formidable a foe [Adam] really is,” he adds.

And with that knowledge, maybe the medical examiner will gain a slight advantage on his cagey caller, who lured him into a cab and then sped away at the end of last week’s episode?

Perhaps, Gruffudd says, “We’ll see Henry getting one over on him.”

Forever fans, log your guesses about the caller’s identity in the comments below!