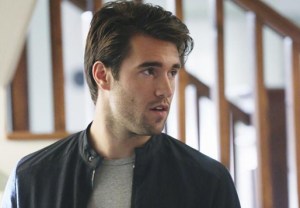 As gut-wrenching as Revenge‘s latest death was, we hope you didn’t use up all your tissues yet. It turns out you still have one more chance to say goodbye to the Hamptons’ dearly departed.

“I’m actually in a couple of flashbacks in Episode 11,” Josh Bowman tells TVLine less than 24 hours after Daniel was gunned down protecting Emily. “One of those [flashback] scenes was the last thing I shot, and that was very strange to do. I’ve been on this show for four years now, so it was a sad day, but one that I’m going to take with me always.”

Below, Bowman tells TVLine why he supports Daniel’s death, what it was like reuniting with Henry Czerny and which Hamptonite his character would most likely haunt — you know, if this was a very different show.

TVLINE | I know this was a decision you and [showrunner Sunil Nayar] came to together. Why, in your mind, was this the right time for Daniel to die?
We’re on our fourth season, and this is a show where that can happen at anytime. I think it was a good decision for the story, and I think it’ll definitely serve its purpose to help the writers move forward. A death on this show can impact all the other characters; Daniel’s will definitely have a big impact on Victoria, Emily — and Margaux, of course, because of our little baby on the way.

TVLINE | Maybe it’ll be a boy.
[Laughs] Yes! Daniel Jr. Seriously, though, my character wasn’t someone you’d root for at the end of Season 3, but by Episode 6, people were hoping Daniel and Emily would rekindle their relationship. Or they were rooting for Margaux and Daniel. Whatever they were doing, it was a credit to the writers for making him redeemable before he died.

TVLINE | Did you watch the episode?
Yes, and it was quite sad actually, to be honest. I don’t usually watch the episodes, just because I don’t think many actors can look at themselves subjectively, but I had to watch it last night. I thought they did a very good job across the board. 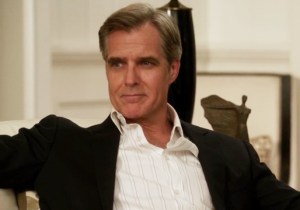 TVLINE | I’m also glad we got to see Conrad last night. How was working with Henry Czerny again?
He’s just an absolute wizard, that guy. He’s not only an amazing person, but a wonderful actor. He takes me out of the scenes when I’m in them because I just want to watch him. He’s phenomenal and I think the show misses him a lot. He is and was a fantastic asset to the show. I’ve tried to pick up some of his quirks — Henry’s not Conrad’s — and lace them into my performance.

TVLINE | You do know the fans have a theory that he’s not really dead, right?
[Laughs] That Conrad might come back? I don’t know if that’s the case. He looked pretty dead to me in Season 3.

TVLINE | Now that the Book of Daniel has closed, what was your favorite part about him?
I loved being an a—hole, to be honest. Anytime Daniel was being nice and straightforward, you know, anyone can be nice. Being an a—hole and doing these awful things was a lot of fun. But I loved it all, really, every bit of it. I’m going to miss it very much.

TVLINE | So this must have been a bittersweet decision for you.
Yes.  helps the story to move forward and potentially reach its conclusion by the end of this season, but who knows? They probably want to do another season, but I have no idea.

TVLINE | If Daniel could come back and haunt one person in the Hamptons, who would it be?
Tyler. [Laughs] But he’s dead, so I guess I couldn’t haunt him.

TVLINE | You could hang out with him.
Yes, I’d hang out with him. No wait, he’s in hell, and I’m not because I sacrificed myself. Seriously, though, it was a very fitting end to save Emily from a bullet after I shot her. … It came full circle.

Revenge-rs, after getting Bowman’s thoughts, how do you feel about Daniel’s death? Drop your thoughts in a comment below.