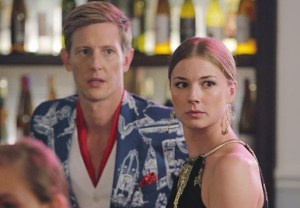 Revenge has been promoting the heck out of its devastating midseason finale death, and as we finally saw Sunday, the highly anticipated offing was well worth the wait.

A brutal — and brilliantly choreographed — scuffle between Emily and Agent Taylor (aka Malcolm Black’s daughter!) led the whole gang, including Jack and Daniel, to Chez Thorne, where a barrage of bullets ended the life of a Hamptons staple. And a damn good looking staple at that.

Ladies and gentlemen, Daniel Grayson has left the building…

Daniel’s death really couldn’t have come at a more devastating time — or a more perfect one. His desperate plea to be included in his child’s life (“There’s only one person running, Margaux, and it’s not me”) came through loud and clear at the top of the hour, sending Ms. LeMarchal straight to Victoria, hoping to be reassured that Daniel isn’t destined to become Conrad 2.0.

Of course, Margaux could have saved herself some time by jumping into Daniel’s flashbacks, which featured surprise (and welcome) appearances from Henry Czerny! Conrad’s speech about how any non-Graysons should be viewed as mere “ants” was pretty unsettling, but it was good to see him back in the Hamptons — not to mention alive — nonetheless.

We learned that Daniel intended to commit social suicide back in 2008, even going so far as to pen a note for Conrad. But instead of “offing” himself, Daniel chose to adopt the Grayson philosophy, thus beginning his gradual evolution into the god-like man Conrad had always pressured him to become. Saving Emily’s life as his final act seemed to absolve Daniel of his past sins — and don’t even get me started on Emily’s speech about how it “wasn’t all a lie” with him. My heart simply cannot deal with that right now.

DRINK UP | David hasn’t been the most stable individual since his return from not-the-dead, but his actions on Sunday’s episode even took me by surprise. (Not the part about him dressing in black and whispering to Emily, though. That was to be expected.) The truly erratic behavior began during his would-be-last date with Victoria, as he sprinkled a little somethin’ somethin’ — more specifically, a fatal plant he picked up from an old prison pal — into her wine, ironically toasting to their “future” together. But when Victoria ‘fessed up to handing David’s computer over to Conrad, sealing his fate all those years ago, he didn’t force the death-wine down her throat like you’d expect him to. In fact, before Daniel’s death cut their conversation short, it looked like David was about to forgive her.

WONDER TWINS ACTIVATE! | Speaking of questionable plans, Nolan craftily maneuvered his way back into Louise’s good graces by asking her to co-host the grand opening of his new club. But is this the beginning of a beautiful friendship, or the start of a twisted game of snarky-cat-and-crazy-mouse? (Oh, God, I hope it’s the latter!)

OH… | I forgot to mention that Jack killed Kate. That was also a thing that happened.

Revenge-rs, were you surprised to see Daniel hit the floor tonight? Grade the midseason finale below, then drop a comment with your reaction to Mr. Grayson’s death.