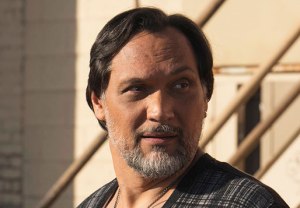 Sons of Anarchy fans, you have been warned: Nero Padilla’s idyllic life on the farm may not come to fruition after all.

In the last 12 episodes alone, the FX drama’s body count has neared 100, including three major deaths — Juice, Unser and Gemma — that punctuated this week’s installment.

“There was a little bit of trepidation on everyone’s part when that final script came in,” Smits told reporters during a conference call on Thursday, adding with a laugh, “Nero made it to the end, but maybe not the end end.”

Though Smits remained understandably tight-lipped about next week’s finale, he was able to hint that Nero will be left reeling in the wake of Gemma’s death — a death he could have prevented.

Smits also echoed co-star Katey Sagal when asked if fans will be satisfied by the series ender. “I don’t think audiences will be disappointed at all,” he said. “The audience is going to be satisfied with the way it ends up, and that it continues to deliver a one-two punch. [Showrunner] Kurt [Sutter] ended it really beautifully.”

But was Smits himself satisfied with Nero’s ultimate end? That’s a different matter.

“I was a little surprised about the way Nero specifically ends up,” Smits hinted. “But I get it. I totally get it.”

Sons fans, what ending do you anticipate for Nero? Hit the comments with your theories!