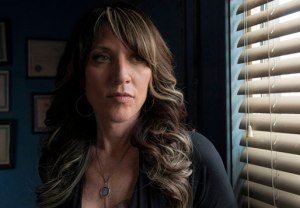 Quite a few loose ends need tying up in Sons of Anarchy‘s final three episodes, but one question arguably towers over them all: What will become of Gemma?

Ask Katey Sagal, and even she can’t say which outcome she’d prefer for the fierce matriarch she portrays. Should Gemma suffer a fatal comeuppance? Or should she be forced to live with the knowledge that her lies destroyed the family she was trying to protect?

“That’s a really tough call, given where she’s at now,” Sagal hedged during a conference call with reporters on Monday. “This is what’s interesting about denial. You wonder what the psychology is of somebody who’s done heinous things. How far can we hide that from ourselves? And would Gemma actually be able to? I don’t know. It’s gone so far that, to me, either way is horrible. But people do do heinous things and continue to have lives.”

Regardless of Gemma’s ultimate fate, all eyes are on Mama Teller now that Jax has gotten wind of Tara’s true killer (from Abel, no less). What can Sagal say about the biker drama’s grand finale? Read on and find out…

CRY ME A RIVER | That showdown between Jax and Gemma that we’ve been waiting for all season? It’s on its way, and it’s highly emotional. “Lots of tears were shed” while filming the tense mother-son scenes, Sagal offers, adding that she’s enjoyed the slow burn of Season 7. “This season, overall, has been so strong in the character department. It’s not that there’s not action, but there’s also a lot of character-to-character conversation and slower beats. All the characters have been serviced really well.”

THE MARK OF ABEL | Despite Gemma’s grandson spilling the murderous beans to Jax, Sagal says Gemma will have difficulty blaming Abel for the mess that’s been made. “How can she do anything but forgive him?” she says. “I sometimes wonder if Gemma really thought she could get away with all of this. I don’t think she has any animosity toward her grandson whatsoever [even when] the walls start closing in.”

WE CAN GET SOME SATISFACTION | As Sons fans anxiously await Gemma’s endgame, Sagal is sure of one thing: Viewers will be very satisfied with the show’s conclusion. “Kurt [Sutter] was trying to approach it like any other episode, where the story keeps going,” Sagal says of the series ender. “It was very satisfying filming it, and I will say that for Charlie [Hunnam] and myself. And it’ll be really great for fans. I don’t think they’ll be disappointed at all.”

Sons of Anarchy fans, what fate do you think awaits Gemma? Sound off in the comments section below!