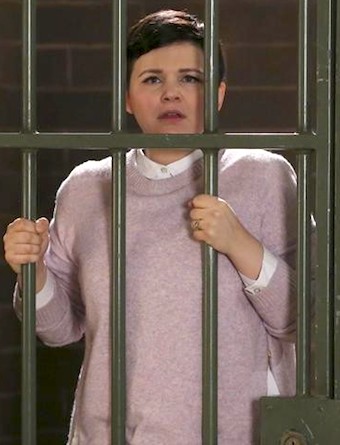 Love has never, ever come easy for Once Upon a Time‘s Snow White and Prince Charming, whose marriage will again be put to the test this Sunday (ABC, 8/7c) as the Snow Queen’s Spell of Shattered Sight brings out the very worst in everyone — the fairest of them all included.

Here, Ginnifer Goodwin previews the return of “Dark Snow” and her clashes with both David and old-school evil Regina, shares the trick to being “mad” at husband Josh Dallas and teases the introduction of another iconic Disney doyenne.

TVLINE | The Spell of Shattered Sight has just been cast. How would you typify what is going on in Mary Margaret and David’s heads as they let go of each other’s hands? Spell or no spell, what beef could they possibly have?
We know that they both have dark sides that have been addressed in the past, and now that they are seemingly cursed again, that darkness is going to reemerge. It might really be the little things in a relationship, the little annoyances and points of frustration, that are magnified, but those are the very things that can destroy a relationship. Like, how he brushes his teeth can be a “final-straw” thing.

TVLINE | Of course you’re an actor, but when you have to look at Josh in a seething way, is there anything you channel in particular? Like, the time he blew off one of [6-month-old son] Oliver’s middle-of-the-night feedings or something?
[Laughs] To be honest, Josh makes me laugh so much on set that I often have to ask him to, like, step away. When I was in fact looking at him that way, there were takes where I just looked at, frankly, a tape mark that we put on a stand instead of him. And then there were times that I did look at him, but I would crack up after just a couple of seconds. They had very little footage they could use, because he does make me laugh so hard. There isn’t actually anything I can channel from real life, so it becomes a technical thing where I’m, like, tilting my head a certain way and trying to make my eyes do something physically to look angry, because I can’t really be mad at him. But that’s also what’s so fun about “going at each other” — we couldn’t really take ourselves seriously, and somehow that made us actually able to go further.

TVLINE | But based on the promo, it looks like the bigger tussle is between Mary Margaret and Regina (played by Lana Parrilla). 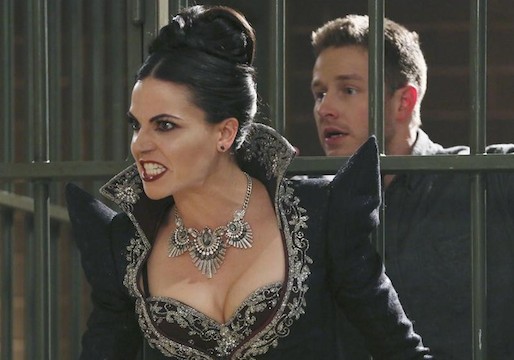 Oh, yes. It’s really wonderful, because Regina comes back [to the sheriff station] as her full Evil Queen self. But instead of it being that they fall into their old dynamic, it’s more that the Evil Queen battles Dark Snow, from those episodes where Snow White was under dark enchantment. And those two energies together is kind of hilarious. I mean, I kept saying, “I could film this episode every day forever,” because also the dialogue was so meaty. There was just so much to play, because these characters have so much history, and yet so much has changed between them. For her to come back in her Evil Queen regalia is hilarious, because she’s so not that person anymore. And there’s something about being Dark Snow in Storybrooke that we also found very funny, because it’s so not the woman that she has become.

TVLINE | Is it explained why Regina is brandishing a sword instead of just good ol’ fireballs?
Well, Mary Margaret does call her on her B.S. and say, basically, “Of course you’re going to use magic, because you’re afraid to get your hands dirty.” She ribs Regina enough to put down her fireballs and go at it, man-to-man.

TVLINE | Did you give Lana any pointers on swordplay?
I cannot even express the high regard in which we hold our stunt doubles, who do all of the heavy lifting. But I didn’t even think about the fact that Lana has not had experience sword-fighting on our show, so she hasn’t gone through the sword training that the rest of went through the first season. But she very easily picks things up – I mean, Lana’s a pro at everything — so it ended up being seamless. But we did have our stunt doubles in there, a lot, because these women really take out all their frustrations on each other. They beat the s–t out of each other! I think it’s going to be one of my favorite episodes ever. I mean, I could not have had more fun. 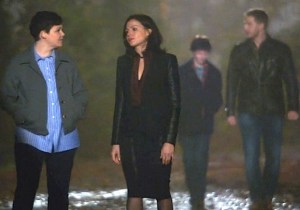 about my appreciation for the “quieter” moments on Once Upon a Time, such as when Regina and Mary Margaret had that talk while tracking Emma. And you recently said on set that you relish those moments as well.
They’re my favorite. And I have always written the [series creators] after every episode that’s like that. We had several episodes [this season] in which those heart-to-hearts were cut — and they should have been, because while they were really beautiful scenes, I would see that they were really not right for the momentum of the episode. But they found a wonderful way to mash together all of those conversations that we had missed, in that walking scene. I cherish these scenes, because as an actor of course it is magical to swordfight and horseback ride and fight “curse clouds,” but you really feel like you get in touch with a different creative side of yourself when you have these heart-to-heart scenes, especially when the history between these characters is so complicated.

TVLINE | That said, are you aware that Mary Margaret took some knocks, for basically “endorsing” adultery?
I very wisely, I believe, don’t read my own press, so no, I did not know that. But that was something we actually talked about [while filming] because it was a complicated line for me to say. My character actually was married to David, back when we were cursed the first time, and David wasn’t actually married to anyone else, so the only cheating that actually, 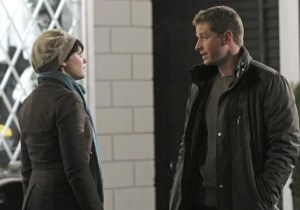 technically occurred was between David and his sick wife [Kathryn]. We must have talked about it for 20 minutes, my making that comment to Regina — “Look, I’ve slept with a married man too” — and we decided that it had to be just a way of my trying to bring her out of her shell, to make her feel safe. It was not to be taken it as literally as it sounded.
I’m not surprised that we got some s–t for it because good, we should, because these characters are flawed, and they’re real, and they’re, I think, relatable and fleshed out. If we were just the live-action incarnation of the Disney animated features, I wouldn’t watch us. I’d find that terribly boring. Instead, we have this really gray world in which we live.

TVLINE | Before we started recording, you said that you, as a new, first-time mom, were OK with having less to do in this Frozen storyline. But do you know if you’re going to have more to do in Season 4B?
Ohhhhh, yes — and it’s good. And it timed out very well, because I’m just at the point where I’m like, “OK, I’m not losing my mind when I have to leave Oliver with one of his grandparents and go to set for 16 hours.” Like, I can hold it together, where, frankly, even a month ago I couldn’t. I would get really emotional and upset, it was just too much for me. But now I understand that he’s going to be fine and actually benefit from spending time with his grandparents than time on set. And the storyline is really good. I’m really excited about it. I know that I’m not allowed to say what I’m doing, but I can say that it’s worth the wait, for sure!

TVLINE | My only question is: How do you organically bring on Cruella de Vil (played by Dracula‘s Victoria Smurfit)? If only because there’s just the one Dalmatian in town.
It, like everything else on Once Upon a Time, will make sense — to the extent that you’re like, “How was this not incorporated in the animated feature?” She’s a perfect Once family member, absolutely.