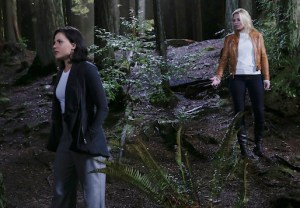 This Sunday on Once Upon a Time (ABC, 8/7c), a common adversary makes for strange bedfellows as both Regina and Emma stalk the mysterious Snow Queen. Could this collaboration be the thing to warm the cold shoulder Regina has shown Marian’s savior?

Ever since Emma (played by Jennifer Morrison) traveled through time and back, with Robin Hood’s wife inadvertently in tow, “Regina wants nothing to do with her,” Lana Parrilla reminds. But that stands to change when the women discover they each are in pursuit of the Snow Queen, for distinct reasons. (Emma feels the chillin’ villain has a personal vendetta against her, while Regina is hot to defreeze Marian, if only so that she can have a living, breathing romantic rival.)

“It’s funny,” Parrilla notes, “because Regina is on her own journey to find the Snow Queen, and Emma is doing the same thing. When they end up crossing paths, [Regina] is like, ‘Ugh. It’s you. What are you doing here?’

“Their journey is quite comedic — Regina just does not let her off that easy,” Parrilla continues. “It’s one snarky remark after another.” Until, that is, the outcome of their escapade sets the stage for an overdue heart-to-heart.

As Parrilla sees it, “What’s so beautiful about Regina and Emma, especially at the end of this episode, is that Emma comes clean and says, ‘I don’t really have anybody else who understands this magic inside of me. You’re the only one I can relate to. And I need you.’ And I think that’s very touching for Regina to hear.”

One of Parrilla’s other favorite dynamics 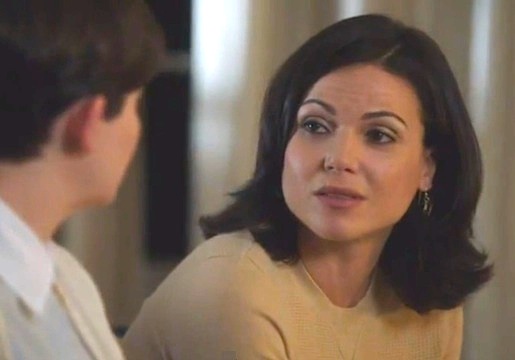 to play on Once is that between Regina and Ginnifer Goodwin‘s Mary Margaret — a relationship that as of late has been paid its due, only to get cut for time. (One scene had Regina deflecting the de facto mayor’s appeal for help with the blackout, while the other found Regina asking Mary Margaret for advice on being in love with a married man à la David/Kathryn.)

Goodwin says that though the scenes were “brilliant,” she understands why they were cut: As evidenced by what made it to broadcast, with so much higher drama going on, the quieter exchanges would have slowed momentum.

The sum total of the sequences, Goodwin says, involved the erstwhile Snow White and Evil Queen “learning to respect each other in such a way in that they now get out of each other’s ways when facing conflict. There’s actually a stepping back because of a newfound mutual respect that they found.”

Parrilla remembers one of the cut scenes as featuring “a really heartbreaking conversation,” to possibly (she hopes) wind up on the full-season DVD set.

“One thing [Ginny and I] love is that these two characters have known each other the longest, for the most part — except for Rumple. But there was once a mother-daughter bond, and to see them graduate to the place they are now is quite beautiful and compelling to play and watch…. They really kind of found each other, and help each other along.” (With reporting by Vlada Gelman)