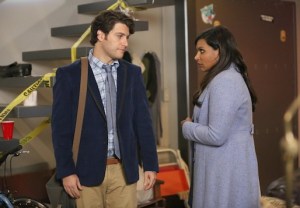 Quick quiz: This week’s Mindy Project is a…

3. … an excuse to have nearly every male member of the cast shed his shirt?

Oh, you know the answer is all of the above. (And yes, Peter, I said “male member.” Stop snickering.)

Dr. Prentiss’ slow evolution from Dartmouth frat jerk to actual adult provides the main plot for Tuesday’s episode, but what’s far more interesting is how the manchild helps Danny — whom we saw have a mini, mental relationship freak-out in last week’s installment — inch ever closer to making a decision about his future with Mindy.

Plus, Danny and Peter wind up in the shower together. And that’s just plain funny.

Let’s review what happens in “What About Peter?”

PETER’S NEW PLACE | When Mindy and Peter stop by his apartment on the way to a Rihanna appearance, she’s horrified by his disgusting, fratty roommates and the general slovenliness of the place. Peter himself isn’t very happy with the way things are, so Mindy sets him up as a renter for Danny’s spare apartment.

Danny’s not psyched about the idea, but Peter’s plea that he needs a “grown-up living situation. Right now, I’m a grown-up who lives like The Situation” (heh) sways Dr. Castellano to give him a lease.

Of course, it’s not long before he’s spending the night on Danny’s couch — Peter’s old roomies destroyed his bed before he moved out” — and showering in Danny’s bathroom.

The latter is a hilarious sequence that begins with Chris Messina removing his scrub top and uttering, “Give me some of that brown butter” as he steps into the steam, thinking he’s meeting Mindy, and ends with wet, nude Danny and Peter getting stuck in the door as they both try to exit the stall quickly. It’s not even Christmas yet, Mindy Project, and you’re already doling out the gifts.

MAKE ROOM FOR MINDY | Mindy argues on Peter’s behalf, but when she finds out from Danny’s contractor that her guy is thinking about combining the apartments to “make room for family,” she (naturally) assumes that means he wants her to move in. So she does an abrupt about-face and evicts Peter… who throws a giant party that trashes the space and lands him in the hospital.

The party also provides the backdrop for Mindy to realize that Danny wasn’t thinking about their family when he asked the contractor about combining units; he had Ma in mind. (Side note: What else is new?) But when Dr. C visits his colleague in the hospital, even though Peter’s “legit concussed,” he points out that Danny knows Mindy’s looking to get married and he should have known she’d be thinking about moving in.

TWO’S COMPANY? | So Danny makes the least romantic offer ever for his lady to move into Casa Castellano — “I’m nervous about it, really, really nervous, but if you want to move in, I want to give it a try” — and I am very proud of Mindy when she turns him down. She doesn’t want to do it unless he’s as excited and certain about their future as she is, she says, asserting that “I’m going to be fine, no matter what happens.” (I like this side of Mindy. It would be nice to see it come out a little more often.)

Naturally, Danny then decides that he does want to live with Mindy. “Well, then, you should ask me sometime when you’re not really, really nervous,” she says. Get it, girl!

MORGAN THE MANNY | Elsewhere, Lauren leaves her son, Henry, with Jeremy. The gig turns into a wailing mess — for both babysitter and babysittee — until Morgan shows up and has the magic touch… which involves removing his shirt. (Don’t worry; it’s weird, but not gross). When the men realize that the baby only likes Jeremy when he’s hurt, the Brit proceeds to take part in slapstick — despite the fact that he bruises “like a peach” — until the kiddo falls asleep. Did you happen to catch Jeremy’s line that maybe he isn’t cut out for dating a woman with kids? Could there will be hope for Lauren and Peter? Should there be?