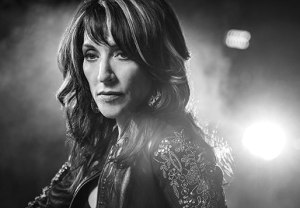 Warning: The following interview contains major spoilers for Sons of Anarchy‘s penultimate episode. If you have yet to watch, don’t click any further.

Much like the Sons of Anarchy fans who have spent Season 7 rooting for Gemma Teller’s demise, Katey Sagal assumed her character’s life would likely end before the series was through.

“I wasn’t surprised. I was just glad I made it to Episode 12,” Sagal admits with a laugh.

In an emotionally charged scene near the end of Tuesday’s episode, Jax finally tracked down his MIA mom and offed her via a gunshot to the head — making Gemma’s death the third fatality of the episode, after Juice and Unser were also killed.

Below, Sagal opens up about her character’s fatal end (and why it was Gemma’s “ultimate manipulation”), the on-set dynamic she shared with TV son Charlie Hunnam and the guest stars she got to work with in her final Sons hour. 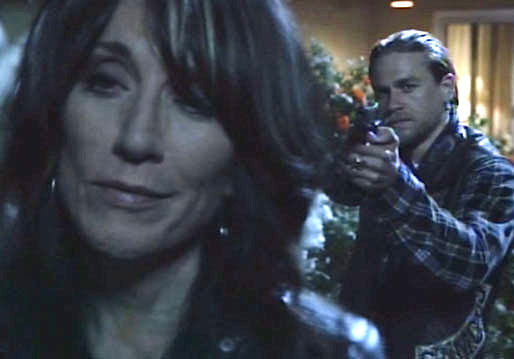 TVLINE | Were you bummed to not make it to the series finale? I was a little surprised that Gemma died in the second-to-last episode and not the last one.
I’ve always seen it as ultimately Jax’s journey. It made sense to me that the finale would be about Jax and wherever he goes. So no, I wasn’t surprised. I was just glad I made it to Episode 12. [Laughs]

TVLINE | There’s been some debate as to whether Gemma should die, or live without getting to see her family again. Was this the ending you wanted for Gemma?
This was the best way to go. At one point, I speculated where she was going before Kurt told me exactly where she was going, and I really thought a living hell would probably be more torturous. I don’t think she’s a person that could function outside of her little insular world. I just don’t see it. I don’t think she knows how to get a job or make money! [Laughs] All those things she has not done. This is actually the merciful way to go.

TVLINE | Did that inform the way you played those final scenes with Unser and Jax? Because Gemma seems oddly at peace with her death by the time Unser finds her.
The truth is, ever since Episode 11 when Nero finds out and she gets in that car and she’s just driving and singing a song, she’s resigned to realizing that her life is never going to be the same. Does she know that she’s going to die? She assumes in the near future, but I don’t think she knows exactly when. The performance was informed a lot by what the writer intended for it to be, which was her resolution, her release of not carrying that secret anymore. That secret of the Chinese killing Tara just caused so much carnage. It was horrible. She’s just had enough of all that, so there is a release about her.

TVLINE | But why not commit suicide then, instead of letting Jax live with having killed his mom?
There’s two ways to look at it. Either she doesn’t have the balls to do it herself, so once again, she’s going to have somebody do it for her. [Laughs] That’s the ultimate manipulation. She loves her son, so there’s part of her that feels it will be healing for him, in a weird way. He’s trying to get revenge for Tara’s death the entire season. He’s just off the chain. So she feels in some way that this would do Tara right, to kill the killer of Tara. 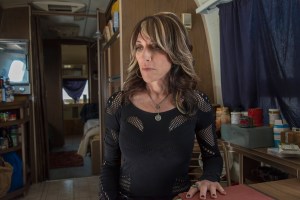 TVLINE | What was the dynamic like between you and Charlie as you filmed those final scenes together?
The first part, when he comes into the living room, I’m not surprised that he’s there. And we both felt that the scene was written very conversationally, without a lot of histrionics. The scene wasn’t written to be like, “Please, save my life!” [Laughs] That’s not the dynamic, and Charlie and I had a conversation about setting that tone. Charlie said, “This really has to be like we’re just having a conversation.” And then those last moments, when I’m walking out to the garden and he’s following me — before every take, we were both just crying and hugging each other. It was very sweet. It makes me cry to think about it. Because it is Jax and Gemma, but it’s also Katey and Charlie and seven years. There’s a lot that goes into those moments. Charlie and I were bawling. That’s what was happening right before we played those scenes.

TVLINE | Speaking of that first scene in the living room, I was devastated to see Jax kill Unser. Was that heartbreaking for you, as well?
It was all heartbreaking. But if you really take it apart, it all happened in, what, three minutes? It was still very quick. Gemma didn’t have the time to process it. At this point in the journey, nothing is surprising. All bets are off. Did she think Unser was going to die? No. But the minute Jax shows up, he’s off the chain. So who knows what’s going to happen? It was definitely heartbreaking, but there wasn’t a lot of processing going on, because we moved on so quickly.

TVLINE | You also had some wonderful scenes with Hal Holbrook as Gemma’s dad, whom we haven’t seen in years. It must have been nice to get that closure for Gemma.
It was absolutely beautiful. He’s just wonderful and so soulful. The minute I met him, I felt connected to him. I love that Kurt wrote that she goes to say goodbye to him. In that moment, she’s almost looking for somebody to say, “You know, you were a good girl.” Gemma’s carrying so much guilt, and she’s wrapping up her journey. In doing so, she needs some validation that she wasn’t just [a bad person]. Gemma has done a lot of good things in her life, too, and her father was a reminder of that.

TVLINE | I loved your scenes with Michael Chiklis as the truck driver, too. There was immediate chemistry, much like with Gertie, the waitress played by Lea Michele a few weeks back.
It was really fun to do all those scenes, especially because you’re out of the compound. You’re off the lot, you’re out of the garage. That was all really great, and I thought Michael did a wonderful job.

TVLINE | Has it been tough to say goodbye to Gemma after all this time? Or are you relieved to step out of her shoes after an emotional seven seasons?
I will definitely miss her. I feel like the way it all ended is perfect. In some ways, having a character die is probably the best way to let go of a character because that character’s been put to rest. She can’t really hang around. I can’t really wonder what she’s going to do next. I can’t do all those things that you might do, especially with someone like her. She had closure, and I have closure playing her. That was a great way to do it.

Sons of Anarchy fans, were you shocked by Gemma’s death in Tuesday’s episode? Sound off in the comments.

(Looking for more coverage of Sons’ latest episode? Check out our Q&A with Theo Rossi.)