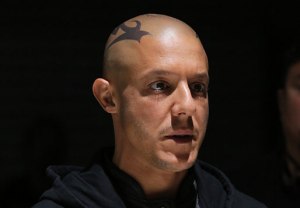 Warning: The following Q&A contains major spoilers from Tuesday’s episode of Sons of Anarchy. If you have yet to watch, don’t click any further.

For all intents and purposes, Sons of Anarchy‘s Juice Ortiz shouldn’t have made it to the series’ penultimate episode.

Not when he ended Season 6 in bitter exile from SAMCRO. Not when he spent Season 7 hiding from the club in Wendy’s apartment, narrowly avoiding Gemma’s attempt to kill him and intentionally landing himself in prison to carry out club business — business that resulted in his grisly death during Tuesday’s episode, which came at the hands of Ron Tully (and an extremely sharp blade).

That said, Theo Rossi insists his character’s fall from grace was not only satisfying, but logical.

TVLine caught up with Rossi to discuss the finer points (pun not intended) of Juice’s death, the “amazing journey” Sons has offered him and, yes, if that pie really tasted as good as it looked.

TVLINE | Were you surprised Juice lasted as long as he did? He’s had a rough go of it for the last few years, and especially this season.
It’s funny, because Juice used to not have a rough go of it. He used to be the comic relief. When Season 4 came around, it started this ride for him. I’ve got to tell you, as an actor, I wish that every actor could experience what I’ve experienced over the last seven years. I’ve really gotten to experience every single emotion that a human can experience in one character. I started off as this funny, loyal, trying-to-find-his-place guy. Then there was the nervousness and the anxiety, into this murderous sociopath, into this depression, into a lap dog that’s trying to find somebody to lead him. And that’s why I love the ending so much for him. I’m exhausted of all this. I just want to go. I’m done. I’ve said my piece to Jax, Juice has let it all out, he’s cleared his conscience. He never, ever did anything maliciously, and that’s why I believe it’s so sad. It reflects, on a much a grander scale, what happens to a lot of people. You get dictated to, and you make choices that weren’t necessarily your own, and then there it is. As an artist in general, it was just the greatest thing. I’m so happy. It’s a super powerful ending, and it was time.

TVLINE | That comes across in Juice’s final scene with Ron Tully, when he ultimately sacrifices himself and lets Tully keep his good reputation with SAMCRO. Did you approach that scene as though Juice was ready to die?
Like anything in life, when you’ve had enough, it’s enough. Where does the cycle end? It’s never going to end. If it’s not Tully, then it’s the Chinese in prison, and I’ll be puppeteered to do something else. Juice can’t make his own choices, and he finally had a chance to make his own choice. And his own choice is, “I’m going to go. And I’m going to go on my terms.” It’s very different than what he tried to do in Season 4, when he tried to take his own life. He was doing that to save others, and this is the first time Juice has done something for himself. There was no more secrets. No more protecting Gemma, no more protecting Clay, no more caring what Jax thought. It was just over.

TVLINE | I love that Juice’s final words were, “Just let me finish my pie.” A funny line, but also quite sad.
It was a really chaotic day [filming that scene]. We were under the gun a lot. And obviously it was the same day that all the stuff earlier in the episode happened, so that’s always a pretty strange mindset to put yourself in. And I love Marilyn Manson [who plays Tully]. There’s truly no one in the world like Manson, just no one. And he was really nervous, but to me — and I’ve done some really crazy stuff, I’ve had to put myself in some weird positions — it was actually the calmest and most relaxed I’ve ever been at a shoot. 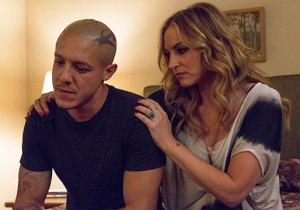 TVLINE | Did that have something to do with eating pie all day?
[Laughs] Yeah, that was fun. It was cherry pie, too, from Whole Foods. It was really good.

TVLINE | How many slices did you have to eat…?
You know, I didn’t have to be shirtless or have my ass out that day. I ate more than I usually do. [Laughs] I had a few. But I felt really peaceful. I have such a love for Juice, you have no idea. I really love the guy. He’s one of the sweetest guys, but also like a lost little boy. At that moment, I liked him so much, because he was just so peaceful in the moment when he wanted that pie.

TVLINE | As for the rest of Juice’s prison time, some of those scenes were really tough to watch. Was it emotionally taxing for you to film them?
With the character of Juice, Kurt has never taken huge leaps. He’s always taken steps. You know the writing is brilliant when no step is really too far from the other steps. When Juice is in prison and he’s stabbing Lin in the neck, we were getting there. Somebody was going to get to Lin, and Juice was in that position to really want to redeem himself. He really did believe that if he did that, Jax would find a way to either get him out of prison or let him be back in the club in prison. He thought that would be it, but then we have that epic nine-minute scene which is a whole other story. Now, the biggest secret ever on the show is going to come out. And in that scene — which was so much fun to play, as an actor — it was the beginning of, “It doesn’t matter” for Juice. And he says that in the next scene [with Unser and Jarry]. It doesn’t matter, nothing can help us. So, were those scenes hard to play? No. God, it’s so much fun. I had a live cockroach running all over my arms. I’ve had to completely be in a position of vulnerability. It’s so much fun. It sounds weird to people who have a hard time understanding how you can even do certain things, but it always made sense to the character. And I’ve always loved that about Kurt’s writing. It’s always made sense for Juice, it’s just been a little more… rocky. [Laughs]

TVLINE | Speaking of which, Juice didn’t have a big love interest in all these years.
Not until Manson. [Laughs] 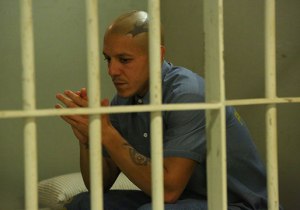 TVLINE | Did it also make sense that your character never really found love?
He just never had that time. How can he be in a position to do that? Juice is a minute-to-minute person. To be in a relationship, you have to actually give part of yourself away and receive someone else that you have to nurture. There was no way Juice could ever be in a relationship, because most of the time, he was just thinking of being alive the next day. Unless it was a Bonnie and Clyde situation, it always made sense. I was never really disappointed about that.

TVLINE | Was there anything else you wanted to do on the show — a scene, a storyline, a stunt — that you never got to do?
No, I really just enjoyed every single second of my SOA journey. The love, the hate, the stirring of emotions in people that I get to see every day from fans — that’s so great, because that’s always what you want to do. I always interpreted Kurt’s story as best I could, and I hope I did it the right way. You go back to Season 1, with all the comedic stuff with Tig, and that was always so much fun to do. After Season 4, there wasn’t much room for levity with him. But I felt really, really good. I got to work with every single actor in a really intimate sense. It’s changed my life forever. I’m really grateful to the Reaper, that’s what I always say. [Laughs] It was an amazing journey.

TVLINE | Did you stick around after Juice was killed off, or will you wait to watch the finale with the rest of the audience?
I knew everything. I was there for the final table read, I was there for everything until the end. I didn’t leave L.A. until the wrap party. That’s how we are. We’re all one giant family. I’m such a huge fan of the show, so I’m really, really excited to see the finale. I know what happens, but as a fan, I’m so satisfied and I’m excited to see how everybody else reacts.

Sons fans, what did you think of Juice’s demise? Hit the comments with your reaction.