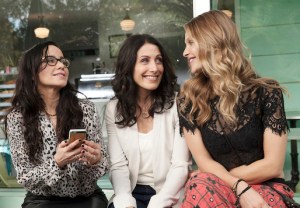 Hear this, Housewives: Bravo broke into the scripted drama game Tuesday night with Girlfriends’ Guide to Divorce, a sometimes breezy, sometimes brutal series about the demise of a self-help guru’s marriage.

In a moment, we want to know what you think about House alum Lisa Edelstein’s latest gig. But first, a brief recap:

Edelstein plays Abby McCarthy, author of a series of get-it-girl! books in which she uses her own life as examples of how to have a happy marriage, family, etc. (The program, executive-produced by Buffy the Vampire Slayer‘s Marti Noxon, is loosely based on Vicky Iovine’s Girlfriends’ Guide series.)

Problem is, Abby and her husband, played by Private Practice‘s Paul Adelstein, are separated — though they’re still living in the same house and trying to keep it hush-hush, for the sake of their two kids… and Abby’s career.

The few in the know about Abby’s unraveling relationship include her pals Lyla, a lawyer played by Janeane Garofalo (Reality Bites), and Phoebe, a hippie chick former model played by Beau Garrett (Criminal Minds: Suspect Behavior) — each with her own drama. Lyla is (dirtily) fighting her husband for full custody of their two sons; Phoebe is engaged in a physical relationship that borders on prostitution.

Frothy scenes of Sex and the City-style merrymaking (drinking, dancing, sleeping with younger men) are interspersed with fraught moments from a crumbling marriage (Jake and Abby’s knock-down in the bedroom, in particular, was tough to watch). By the end, the kids know what’s up and a very upset Abby — after swallowing a pill Lyla slips her just before a booksigning — shocks her fans by admitting that she sometimes wished her husband would just die and make everything “easier.” When video of the moment goes viral, it looks like Abby’s career may be the first casualty of her impending divorce.

Edelstein is funny in her new role, which is a nice departure from House‘s perpetually harried Dr. Cuddy. Similarly, Abby’s hijinks with Phoebe and Lyla (who’ll depart the show after Episode 6) have a randy, rebellious feel. It’s easy to see how the series could fall into ridiculousness, but right now, it’s an entertaining ride.

We know you’ve got thoughts on the premiere. Grade the episode via the poll below, then hit the comments to back up your choice!