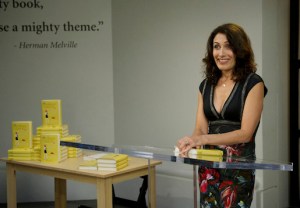 Chances are, your TV has had an intimate, decades-long affair with Marti Noxon.

Buffy the Vampire Slayer. Angel. Mad Men. Grey’s Anatomy. Glee. Prison Break. Noxon has written and/or produced episodes of all of them, which she says prepared her well for her latest gig: creator, writer and executive producer of Bravo’s Girlfriends’ Guide to Divorce.

In fact, she tells TVLine, just the other day she and Joss Whedon were chatting about the relative ease with which Buffy made it to air every week.

“Especially now that we’re both doing such different things, we’re always like, ‘Ah, Buffy. Remember when it was so simple?” she says, laughing. “Of course, it didn’t feel simple at the time.”

Girlfriends’ Guide premieres tonight (Bravo, 10/9c). In a chat with TVLine, Noxon discussed British comedies, “good-er” divorces, midseason cast changes and what she — and Abby — have learned along the way.

TVLINE | So how, exactly, was Buffy easier?
It was easier in the respect that — I had to learn it by going and working other places — they kind of left us alone. [The network] let us make the show. We rarely got notes after Season 1, and I only heard about the first season. But when they did, they could often be swatted away by me with, “Hmm, I don’t think Joss is gonna like that.” [Laughs] In that respect, it was a simpler time.

TVLINE | What about Bravo? How are they as overlords?
Well, they’re not the big bad. That’s for sure… It’s been, probably since Buffy, my best television experience to date. They really wanted to push the show to be as good as it could be. They kind of welcomed a conversation instead of other situations I’ve been in where if they give a note and you push back, the note just keeps coming in until you finally give in out of sheer exhaustion. I think I’ve also grown a little bit in that I’m not so easily dissuaded if I really believe something. But philosophically, we always saw the same show — which is really important.

TVLINE | Must be a relief.
That’s often a problem, and it’s one of the reasons I wrote the script on spec. Even when we sold it to Showtime, we went in with the script written. Because I knew that this is the kind of show that, when you describe it, if you just tell someone what the show is and what’s it’s about, it could sound really cheesy… I could have seen it going in a really bad direction…[Laughs] Execution is so important, and if you all don’t see the same thing, that disconnect can kill you. A show can be completely dead before you even get on the air. I’ve been privy to a couple of those.

TVLINE | While I was watching, I was thinking how the balance between the lighter scenes and stuff like an anguishing fight between Abby and her husband, Jake, could turn into a very violent seesaw if not handled properly.
In terms of tone, we talked about [screenwriter] Richard Curtis and the Working Title movies… When those films are working, I feel like they walk that tone beautifully… Certainly, Four Weddings and a Funeral — being able to hover just 3 feet above the ground and not 20 feet, so that when you land and you come into real emotion and real drama, you still feel like you’re in the same world and you also still feel like you know these people. They’re not telling jokes. They’re just people who like to laugh.

TVLINE | In the second episode, a character brings up the idea that a “good divorce” is a myth. How much do you espouse that belief? Is it something that Abby and Jake can work toward?
I think there’s a good-er divorce. I think that’s absolutely possible. There’s a better way to do it and everything in between, and then of course there’s the disastrous way to do it… I do think there’s a good-er divorce, and that’s where Abby ends up. There’s some truth to what Lyla says, but of course, Lyla’s not the best judge. 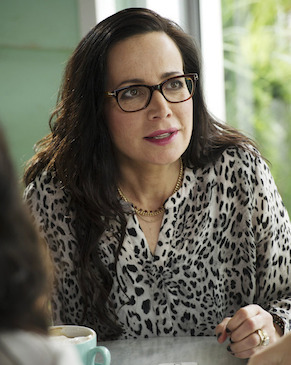 TVLINE | Speaking of the pro-divorce Lyla — we know that Janeane Garofalo has left the show. What can you tease about her character’s exit?
It works out that her availability, it landed perfectly. She left right after [Episode] 6, so we then started to design a storyline that could let her jump out when she needed to get out. We just love her and any opportunity to work with her was better than no opportunity. It all worked out. About midway through the season, there’s a big event in Lyla’s life, and hopefully, people will be a little bit surprised.

TVLINE | After Lyla leaves, Abby’s college friend, Jo, comes to Los Angeles. She’s played by Alanna Ubach (Hung) and she’s got this very New York energy about her; does she mesh with the other ladies?
It’s funny, because she’s somewhat fashioned after a couple of my New York friends. I spent a lot of time on the East Coast growing up, and I’d say the majority of my good friends are all either from D.C. or New York. I’m drawn to their frankness and it’s harder to hurt each other’s feelings. [Laughs] I think because she’s got a good heart, they accept her pretty readily. But she and Abby are the ones who are actually prone to have more conflict, which is really fun. Because they have a whole previous life. You know, you can’t have her fighting with Jake every episode, so we need somebody else for her to [argue] with. [Laughs]

You’ve done so much TV. Were there any lessons in particular that shaped how you wanted Girlfriends’ Guide to go?
It’s funny, I even think it’s part of Abby’s journey. It’s no accident now that I look back on the episodes — when you’re in it, you don’t really realize your’e doing it – but I ended up writing about it, in a way. I think my biggest problem as a creative person trying to work within a business for profit was that it was very important to me that people liked me. Over the years, observing other showrunners who made work that I so admired, I realized that that had to go. This couldn’t be my first priority. My first priority had to be the work. I had to learn how to go to the mat on the things that were important to me but also learn to choose my battles. Maybe it’s not always true, but I think for women, that’s a tough one. The interesting thing is, I let go of that idea over time, and in the end, I like myself better. Because I wasn’t such a pushover. I think when you fight for a show and you love a show, it shows.