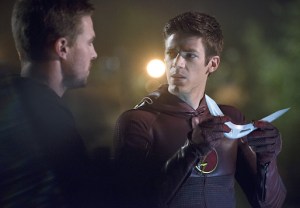 Barry Allen and Oliver Queen may have become fast friends when the Central City CSI first appeared on The CW’s Arrow, but this week on The Flash — in the opener of a two-night crossover event — the brahs brutally clashed, under extenuating circumstances. Then, once the dust cleared, one of the superheroes got a blast from his past (though just how big, he has no idea).

Most simply (and easily) said, Part 1 of the crossover was expectedly super — once one accepted Oliver’s extra-prickly personality within the Central City town lines. (We were told that he was on edge about more people learning his secret identity as Felicity leaned on the S.T.A.R. Labs team to analyze the mysterious boomerang that figured into a Starling City murder. But even so, it seemed a bit much.)

Setting that aside, there is not one base the crossover didn’t touch — including the establishing of Dr. Wells and Joe West as Arrow skeptics, backed as they are by seeming evidence of the vigilante’s “dark reckoning” and “brutal, violent vision of justice”; Diggle’s gobsmacked witnessing of Barry’s speed (“You’re fast”); the amusing contrast of Dig and Cisco as super-friends; Felicity and Caitlin passing the Bechdel test while sharing smarts; Dr. Wells subtly sharing his deduction of the Arrow’s identity, and Oliver noting there’s “something off” about the scientist; and of course the showdown between Flash and Arrow, after the former got “whammied” by VOTW Ray Bivolo.

The actual throwdown was bigger and actually more “brutal” than I was anticipating, especially when Arrow would perforate The Flash with arrows and what have you — with the knowledge, of course, that his opponent healed quickly. And though fueled by a metahuman-manufactured rage, the brawl nonetheless packed storyline punch, underscoring as it did the lessons that Oliver labored to teach Barry, about employing precision versus just powers, about casing a situation before racing into it. The fight was very Rocky I-like, right down to the veritable draw.

And then you had the humor — so, so much wonderful humor, from all corners. Diggle’s ongoing awe of Barry’s speed (including what it might mean for his waste processing). Oliver’s reluctance to refer to “metahumans” and his similar distaste for the “silly code names” assigned to The Flash’s foes, only to have “Deathstroke” and “Huntress” thrown back in his face. The smack-talking inside S.T.A.R. Labs from both “team” benches as they watched the showdown like a PPV fight. Oliver’s juxtaposition of the “pipeline” with his less-sleek prison on Lian Yu.

As far as The Flash itself goes, there was storyline movement in the form of Eddie rallying for a task force to target the speedster, his wayward cause given the veneer of validation after Iris’ detective beau was targeted by Barry’s unorthodox rage-fest. That out-of-character outburst even disenfranchised Iris — and on the heels of The Flash making clear his crush on the blogger, no less! And though an end-of-episode encounter ‘tween the two paved the way for an eventual reconciliation, Oliver’s parting piece of advice for Barry was a somber one: Guys like us don’t get the girl.

Lastly, as the hour 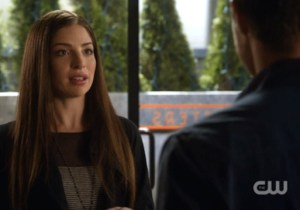 drew to a close, there were “bonus” goodies for fans of each show: First, Oliver bumped into his conspicuously nameless ex-girlfriend (played again by Anna Hopkins aka Defiance‘s Berlin), the same lass that Moira paid to bolt Starling City after she got pregnant. Identified to Felicity only as “somebody that I used to know,” the young woman went on to place a phone call… to her and Oliver’s child, referred to by “mommy” only as “sweetheart.” Flash fans, meanwhile, got a glimpse of Caitlin’s fiance Ronnie (Robbie Amell), who had been presumed dead in the particle accelerator malfunction but in actuality is roaming the streets as the hothead to be known as Firestorm.

NOTABLE & QUOTABLE:
* Felicity stripping off her smoldering clothes (“I’m so glad I decided not to go braless”), then over-explaining to Caitlin how she and Barry are so not happening.
* Iris revealing that Oliver Queen is on her “three list” of guys she’s allowed to cheat on Eddie with.
* When The Flash meets with Iris, does he always stop to set up a semi-blinding floodlight over his shoulder?
* “Once super-thieves showed up, I went mattress.”
* “I’ve gotta run.” “I bet you say that to all the girls.” “What other girls?”
* “I have a cousin who got hit by lightning once. He just developed a stutter.”
* “This is you watching my back?”
* “Don’t you sleep?”
* “Since when do we have facial recognition software?” “Happy Hanukkah!”

What did you think of “The Flash Vs. Arrow”?