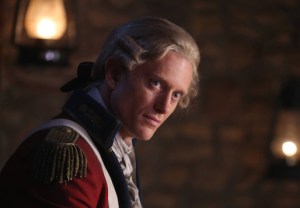 If Sleepy Hollow‘s Ichabod really wants to know what Katrina is up to when she’s hanging out at Fredericks Manor, all he has to do is surf YouTube.

The videos — there are currently just a couple — are silly scenes that grew out of the actors joking around between takes.

“What would be the scene, between the scenes, between these two people when the cameras stop rolling?” Jackson muses to TVLine. “How do Abraham and Katrina live?”

It all began when “We finished a scene really quickly, and I handed my camera to somebody and did this little moment where I said, ‘Would you like some music while you dine?’ and started beatboxing,” he says, laughing, “which is just the most absurd thing you can imagine Abraham doing.”

Wanna see? Press PLAY on the video below, then scroll down for more:

Originally, the vids were “just for our amusement,” Jackson says, but after he posted, “suddenly people loved it.” (The beatboxing clip currently has more than 5,000 views.)

Another video shows Katrina brushing Abraham’s hair as they discuss the merits of different kinds of dessert. (Yes, it’s as surreal as it sounds.)

Jackson says he may post more clips as the season goes on.

“We’ve got so many,” he says. “It’s one of the big sources of entertainment for a whole load of us on set — for Katia [Winter] and John Noble — because we’re in that situation and we’re all so terribly serious… We’re just constantly thinking of ridiculous situations you can find Henry and Headless and Katrina in.”