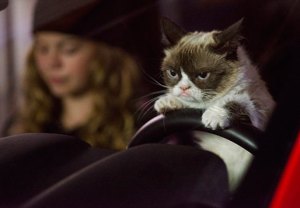 Despite its suggestive title, Grumpy Cat’s Worst Christmas Ever — which premiered Saturday on Lifetime — is not a film about the birth of Jesus as seen through the eyes of a grouchy feline.

It’s really a film about dognapping, divorce, bullying and the general failure of the American mall security system. Most importantly, though, it makes absolutely no sense — which is kind of the point. I think.

Anyway, here’s the “plot” in a nutshell: We meet Grumpy Cat (voiced by Parks and Recreation‘s Aubrey Plaza) in the mall pet shop she calls home, though bad business is threatening to shut it down for good. The owner plans to save his shop by bringing in a rare breed of dog named JoJo — one guaranteed to drum up attention, business, etc. — though he doesn’t account for the wily pair of wannabe rockstars plotting to steal the prized pooch.

Then comes the real plot twist: it turns out the security guard attempting to thwart the burglars is actually behind the whole operation! And in the midst of all this madness, a sad, young girl named Chrystal (Megan Charpentier) forms a mysterious bond with Grumpy Cat; thanks to a magical wish, she can actually understand what the cat is thinking.

Regardless of any negative feelings you may have towards the movie, there’s no more aggressive critic than the star herself, who regularly interjects her displeasure with its many flaws. That brand of self-awareness is alive and well throughout the entire movie, including this prophetic quip: “Please, like the Lifetime execs would blow their chance at a sequel.”

Were you a-meow-sed by Grumpy‘s first Lifetime movie? Grade it below, then drop a comment with your full review. 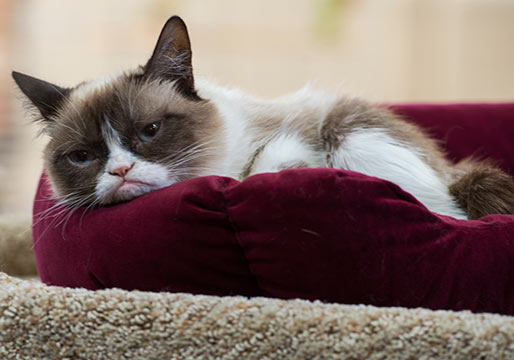