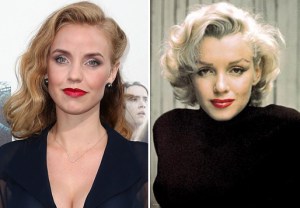 Kelli Garner (Pan Am, My Generation) has scored the title role in Marilyn, Lifetime’s upcoming miniseries about Marilyn Monroe, TVLine has learned.

As previously reported, Oscar winner Susan Sarandon is set to play the bombshell’s mentally ill mom, whose struggle with her own demons had a profound affect on her famous daughter’s life.

Marilyn, based on J. Randy Taraborrelli’s book The Secret Life of Marilyn Monroe, promises to reveal “for the first time what the iconic superstar succeeded in hiding from an all-too-invasive world.”

The four-hour miniseries is slated to air in 2015.

Do you think Garner will do justice to MM? Would you have preferred to see another blond in the role? Hit the comments!