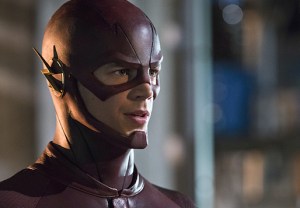 This week on The CW’s The Flash, Barry was powered down by a run-in with an electrifying new adversary, while Dr. Wells’ investment in Barry’s future became just a smidgen more evident.

First and foremost, the episode “Power Outage” raises a pair of provocative questions. As alluded to above, there is the ongoing matter of Dr. Wells’ specific stake in not just Barry’s future but The Flash’s. Conferring with his AI assistant “Gideon,” Wells observes how “the subject’s” penchant for heroics is keeping him from realizing the full scope of his abilities. That said, “the future remains intact,” as evidenced by that front page of the 2024 Gazette. Barry just needs to “kick it up a notch” if he is to use his powers to help a greater humanity versus the random Central City citizen.

Later, there was the question of how far Wells (or anyone in this fight) will go to preserve their interests. Because at one point — after seeing that the future has been altered 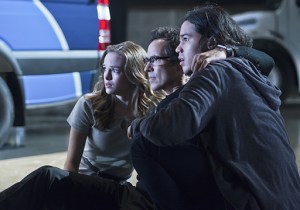 by The Flash’s incapacitation, shifting the future Gazette headlines to ones about a “Red Skies Threat” (versus “Vanishing”) and, sigh, a scrapping of the Wayne/Queen merger — and with the metahuman Farooq (aka “Blackout,” had Cisco had time to name him) on the loose inside S.T.A.R. Labs, Wells sets “Girder” free, to stop the threat. But when Tony is fatally felled by “Zappy,” Barry is aghast to learn that Wells played a role in his doomed mission. “He didn’t deserve to die,” Barry argues. To which Wells counters, “Did Caitlin? Did Cisco, me…?” Keeping an eye on the far bigger picture, the doc adds, “I don’t have the luxury of sharing your ideals.”

Of course, it was also good to see Robert Knepper back as Tockman/Clock King, a role he originated on Arrow — here staging a cop shop coup during the Farooq-caused blackout, gunning down Eddie and (briefly) taking Iris hostage. With Barry short-circuited, The Flash was unable to save that day, so he (ugh) makes a point to later visit Iris and apologize, promising to “never be late again.” (Iris notes that her “best friend is always saying” the same thing, in case the moment wasn’t on-the-nose enough for you.) When The Flash says that Iris is “worth being on time for,” it leaves Miss West a bit flustered (Flashtered?).

At episode’s end, Wells tells Gideon that he must “revisit our initial thesis,” saying that Barry’s “attachment to people” is what will keep him up to speed — and thus keep the future “intact,” as confirmed by the Gazette‘s restored headlines. For the final tag, we see Wells covertly secure a DNA sample from dead Farooq, intrigued as he is by the metahuman’s ability to stop The Flash.

What did you think of “Power Outage”? And of the Flash/Arrow crossover promo (embedded below c/o the fine folks at Television Promos)?