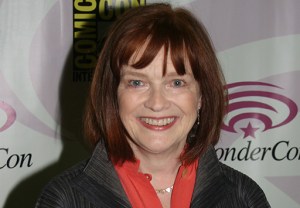 A Fringe alum is now a Person of Interest.

Blair Brown — who played multiple versions of Nina Sharp on the defunct Fox series — will appear in a February episode of the CBS drama as Emma, an elegant and warm former public school teacher, IGN reports.

Emma was forced into early retirement, but a jury summons brings the promise of some excitement (at least in the form of Reese and Finch) back into her life.

* New Girl has tapped Meaghan Rath (Being Human) to play a love interest for Coach in a Valentine’s Day-themed installment, per The Hollywood Reporter.

* Steven Weber (Chasing Life) will appear in an episode of House of Lies‘ fourth season as a turnaround specialist who attempts to help Marty and the Pod — at least, that’s the initial plan. Season 4 premieres Sunday, Jan. 11, at 10 pm on Showtime.

* Sarah Bolger (Once Upon a Time’s Aurora), Emily Beecham (The Village) and Oliver Stark (Dracula) have joined the cast of AMC’s martial-arts drama Badlands as series regulars. David Dobkin (Friends With Benefits) has also come on board as series director and executive producer.