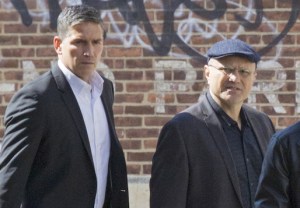 Carl Elias has always proven to be a most interesting person in fleeting doses, but this week he is in fact the Person of Interest, as the CBS drama uncorks its action-packed penultimate fall episode tonight at 10/9c.

Enrico Colantoni shared with TVLine his immense appreciation for the unique adversary, teased a shift in the Elias/Reese/Finch dynamic, chimed in on his TV doppelgänger and enthused about Veronica Mars‘ recent Dick moves.

TVLINE | How did this week’s Person of Interest stand apart for you, out of the 16 or so that you’ve been in?
We really spent a lot of time on Elias, which is always fun. And the more time I get to spend with Michael Emerson and Jim Caviezel, I’m a happy guy…. Elias is such a cool character to play – he’s sardonic, he’s ironic, he’s vicious, he’s so unlike other villains on TV. Spending all those days on a real, larger arc hasn’t happened since he was “Charlie Burton” in the first season…. We find out so much more about him and Scarface (played by David Valcin) and their lives…. It’s rare that TV shows take the time to develop characters like that.

TVLINE | I like how Elias is quietly powerful. He doesn’t really yell, he won’t get in your face. He’ll just say that one little line that puts the fear of God in you.
Yeah, because he’s written in a way where his actions are louder than his words. He’s a businessman, he’s quiet, he walks softly and of course carries a very, very big stick.

TVLINE | What is Dominic’s beef with him?
Well, Dominic (Winston Duke) is trying to take over New York – exactly the way that Elias took over, so he’s just cleaning house. Elias wiped out all the families and then he was the big boy, and Dominic’s operating the same way. Dominic’s as intelligent [as Elias], but probably more vicious. 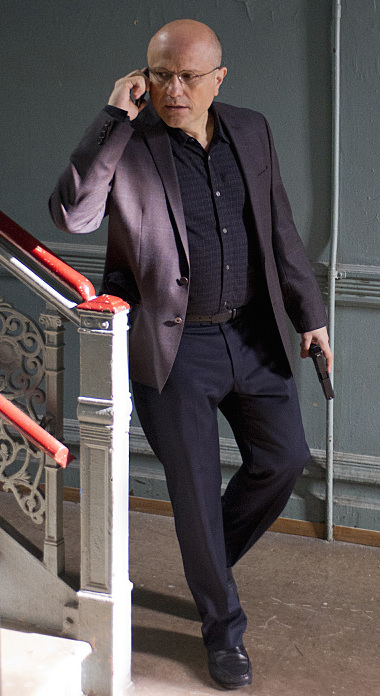 Clearly he doesn’t have the sense of humor that Elias has, so he’s intense and dangerous. What a great character that guy is. Things are coming to a head.

TVLINE | Even before this episode, where they must protect him as the POI, would you say that Elias and Reese and Finch have a mutual professional respect for each other?
They certainly do. Too often they’ve scratched each other’s backs, so I think the title of the episode is perfect — “The Devil You Know.” That’s been their relationship from the beginning.

TVLINE | Does that respect only increase as a result of this week’s events?
Uh…. Probably not.

TVLINE | Where does Elias rank among the characters you’ve played on TV? Pretty high up there?
Ohhhh, I can’t. I can’t. Oh my goodness. I think what makes him so special is that he’s not there all the time [in every episode]. [Laughs] He really is just this wonderful spice on a TV show that is so great. So no one gets tired of him, and I don’t get tired of going to New York and working with these people. If I was on contract with this show and working those hours, it’d be like, “Oh please, get me home,” but it’s just a little vacation every time I get a phone call from them. To get to go to New York and say those great words and have so much fun in this world, it’s gotta [rank], OK, “1A”…?

TVLINE | You had such a conspicuous one-off role in the Mysteries of Laura pilot, it struck me as a favor for someone. Was it?
Well, it wasn’t really a favor for anyone other than it got me back to New York. [Laughs] I love Deb Messing, but it’s not like she asked me to do it. But when I knew that it was her — she and I go back to grad school – it was yet another reason to go back to New York with my wife.

TVLINE | There’s an actor on this new CW series, The Flash…. He plays a cop, and he’ll walk through a scene and I’m telling you, he’s almost your ringer. Have you ever heard of this guy, Fulvio Cecere?
Yeah…. We get that a lot. We once met finally, after so many years of people saying that, and it was really remarkable for both of us –“Yeah, I see it.” He’s a great actor, and what’s funny is he spends a lot of time in Vancouver while I’m now in Toronto most of the time. 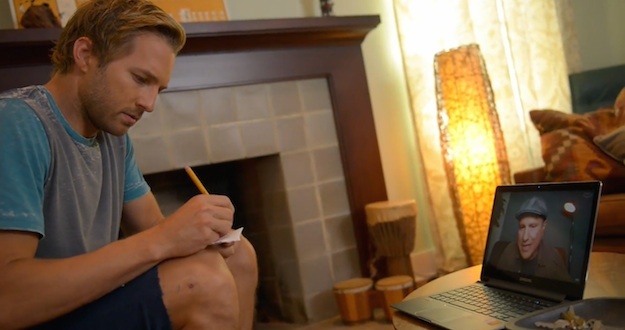 TVLINE | “The slightly nastier Enrico.”
Yeah, the nastier side. Or maybe some people who know me might say “the real me.” [Laughs]

TVLINE | What’s next for you?
I’ve been here in Canada doing a wonderful show called Remedy, that hasn’t found a home in the United States yet. It’s a wonderful family drama that takes place in a hospital. [Colantoni stars as the Toronto hospital’s Chief of Staff.] I’m actually directing the current episode, which I appreciate. It’s been great fun.

TVLINE | It might be one of those Flashpoint scenarios, where NBC or someone picks it up for the summer?
Yeah, that’s what we’re hoping for. That’s our hope!