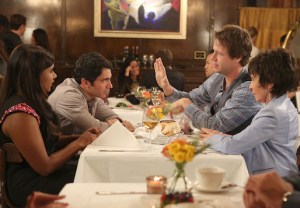 The Mindy Project‘s Daniel Castellano: So awesome, yet such a weirdo about his mom.

That’s what this week’s episode — and truthfully, all of the comedy’s Annette episodes this season — boils down to. I’m not complaining, because Rhea Perlman is perfectly cast as Chris Messina’s on-screen mama, and their characters’ too-close relationship is the comedy equivalent of homemade pasta fagioli: warm, delicious and satisfying.

Still, by the end of “How to Lose a Mom in Ten Days,” it feels like we’ve made a little headway into easing Annette’s iron grip on her son’s heart — maybe even making enough room for Mindy to permanently move in? And that progress is a very good thing. Let’s take a look at the highlights.

A (VERY) SQUEAKY THIRD WHEEL | Mindy and Danny open the episode by sharing a bath at his place. If it’s not bad enough that Min has to talk her man into sharing the tub with her — “Isn’t that like marinating in your own filth?” he scoffs — they’re soon interrupted by Annette at the door. At Danny’s frantic urging, Mindy ducks under the surface when Ma barges in and starts railing against Sophia Grace and Rosie on Ellen, but it’s for naught: Annette definitely knows she’s under there.

Danny later acknowledges that he and his mother, who routinely goes through her son’s phone and intercepts Mindy’s sexts, “don’t have a normal mother-son relationship.” Bit of an understatement, eh? So Dr. Lahiri comes up with the idea of setting Annette up on a date with the near-retirement-age Dr. Ludrow, a colleague from the hospital.

“I haven’t been on a date since 1974. Has a lot changed? Do people still do cocaine?,” Annette says, the last question asked with a little too much hope. Mindy lends her an outfit and all is going well until Danny comes home and learns what’s going on. (Side note: I frickin’ love Dot. I could use a lot more Dot in my Mindy Project.)

ROMANCING THE MORGAN | Mindy assures Danny that everything will be fine; little does she know, she’s created a dating monster. Annette starts perusing online dating profiles and selects Morgan, who’s back in the game after Tamra dumped him. “What happened? Did you see the two of you in a mirror together?” Mindy asks, and ouch. She often is not a nice person, is she?

Mindy encourages Nurse Tookers and Mrs. Castellano to go out, thinking that the date will be so bad that it will make Dr. Ludrow look stellar in comparison. But Annette winds up loving Morgan, which gives the lumbering weirdo the idea that he’s going to be Danny’s new dad.

I don’t even care that it’s ridiculous that the two men are playing catch on the practice’s terrace; the fact that they’re wearing identical red baseball caps is a visual that makes me laugh out loud. The awkward tussle they have when Danny realizes that Morgan is dating his mom is some good physical comedy, too. Danny yells “This is all your fault!” at Mindy before he storms off, but seriously? It seems like he does that every 15 minutes.

BATH ZITI | So Mindy and Danny arrange an intervention at a restaurant… only Annette thinks it’s a double date and invites Morgan. Danny pulls his mom outside to talk some sense into her, but she reveals that she’s wanted to date since his father took off. She didn’t, she explains, because “I couldn’t bring another guy into the house who could disappoint you again.” Danny calls his mom a saint, “not the BS kind like Mother Teresa” (heh), and Annette eventually gives Dr. Ludrow another chance — which in turn makes the older doc feel so young he decides not to retire, thwarting Jeremy’s episode-long bid to acquire his patients.

FREE AGAIN | One loose end to tie up: Tamra winds up at the restaurant, too, in an effort to win Morgan back. But he decides to see who and what else is out there, so she beats him and Mindy with a loaf of bread.

Now it’s your turn. What made you laugh hardest during the hour? Danny’s explanation of why Indian gods have so many hands? Beverly shucking corn at her desk? Dot’s one-liners? Sound off in the comments!