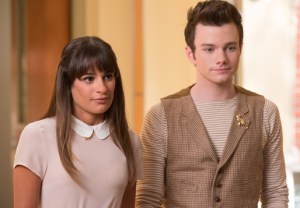 Glee is preparing to take its final bow this January, and TVLine has an exclusive first look at the poster Fox whipped up for its big send-off season.

RELATED Exclusive Glee Wedding Scoop: Which Two Couples Are Saying ‘I Do’ in Season 6?

Making good use of Glee‘s iconic hand-L, the art takes fans back to the McKinley High School auditorium for one last look into the spotlight that so many gleeks have fought to stand in over the years.

The auditorium theme is also appropriate, as Glee‘s final season — premiering Friday, Jan. 9, at 8/7c — will largely take place where it all began: Lima, Ohio.

Following her failed attempt at a TV career, Rachel — with Kurt in tow — will return to McKinley to help revive New Directions; Mr. Schue is reportedly becoming the new coach of Vocal Adrenaline; and Blaine will head back to his own alma mater to help out the Warblers.

Meanwhile, a bevy of familiar faces — featured in our behind-the-scenes Season 6 gallery — will rotate in and out until it’s time for Glee‘s last curtain call.

What are you hoping to see in Glee‘s final season? Drop a comment with your wish list below.