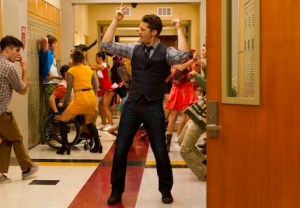 The repopulation of McKinley High has begun!

Glee is set to introduce at least five new characters — all of them McKinley sophomores — in its sixth and final season, TVLine has learned exclusively. The recurring newbies include:

RODERICK | Chubby and shy with a voice like Otis Redding, his looks don’t match with his talent. Described as, “a true goober.” He’s the show’s new underdog.

SPENCER | He’s the new resident “football stud” who just so happens to possess an incredible voice. He’s also gay. But, per the casting notice, “he’s post-Glee gay — no one messes with him about his sexuality because he will kick their asses if they do.”

JANE | Righteous, ambitious and unconventionally pretty, she’s funny because she doesn’t have much of a sense of humor. She wanted to be a Warbler but tradition kept her from joining so she jumps ship to the New Directions.

Back in June,  series co-creator Ryan Murphy told TVLine that the show will shift back to its original conceit in Season 6 — and these five roles appear to back that up.

Murphy’s quotes — as well as fellow EP Brad Falchuk’s assertion to TVLine that “there will be a lot going on in Lima” in Season 6 — all but confirmed speculation that much of the action will once again take place at McKinley.

Glee is set to return to Fox’s schedule at midseason.