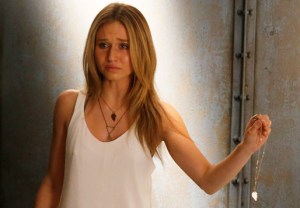 Faking It‘s midseason finale was a little bit Scandal, a little bit 21 Jump Street and all kinds of crazy. And when the dust finally settled, some relationships were elevated to new heights, while others were (seemingly) shattered beyond repair.

“Our first season finale was so epic that I felt like we set the bar high,” executive producer Carter Covington tells TVLine. “I wanted to continue the tradition of Faking It being a show that has crazy season finales. I think we succeeded.”

Uh… Yeah, I think that’s safe to say. Here’s a quick rundown of what happened Tuesday, you know, in case you blinked:

Theo, who was revealed to be an undercover cop, arrested Karma, her parents and an overly aggressive Amy; Liam’s dad got their charges dropped, but only after he agreed to someday join the family business; during an argument with Theo, Lauren screamed about being intersex, a revelation which will likely win her class presidency; and lastly, Shane outed Duke, who then publicly declared his love for Shane at a televised press conference.

Below, Covington previews how the finale’s twists will affect Hester High’s finest when Season 2 returns in 2015:

AMY & KARMA | First, the good news: “In the end, I really wanted fans to know that [Karma and Amy are] going to be OK,” Covington says. “She’s going to forgive Amy and try to move forward in their friendship.” Now, the weird news: “That dream Karma had shows her feelings are complicated. There are definitely still trust issues. Plus, she was dreaming about herself kissing Amy, so what’s that?”

KARMA & LIAM | Because Liam has learned nothing about lying this season, he’ll choose to keep his personal sacrifice a secret from Karma for as long as he can. Of course, things will get tricky when he finds himself interning at Skwerkel alongside a “nihilistic” socialite named Zita (Pretty Little Liars‘ Chloe Bridges), who will prove to be “a little bit of a twist in the road for the Karma-Liam relationship.” As for Karma, “we’ll see a little of how this loss of innocence has affected her. She’s always wanted her life to be like a teen movie, and now she’s realizing that might not be possible.”

SHANE & DUKE | “It’s kind of a ‘be careful what you wish for’ scenario,” Covington says of Shane and Duke, who the show is using to “explore what’s happening in professional sports with athletes coming out, how they’re being supported and how sponsors are lining up to represent them.” Sounds great, right? Well, there’s a catch: “Shane’s going to realize that he had Duke all to himself before he outed him. Now he’ll have to share him with a lot more people.”

LAUREN & THEO | “Theo is definitely going to come back, and he’s going to want to explain himself to Lauren,” Covington assures us. “There are so many obstacles to them being a couple, but when she asked, ‘Was any of it real?’ he only felt pressured to say no because his boss was right there. We’ve always felt like his connection with her is real and genuine, so we’re going to explore that.” As for Lauren’s turn as class president, a position she’s getting as a result of being intersex, you can expect plenty of inner conflict. “She’s becoming accepted for the one thing she still hasn’t fully accepted about herself,” Covington says. “It’s a new coming out story that we’re playing with. Plus, just seeing Lauren is power is going to be a hoot.”

Your thoughts on tonight’s Faking It finale? Browse photos below, then drop a comment: What do you hope to see when the show returns in 2015?