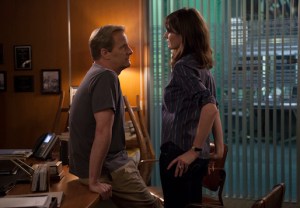 Will takes a giant gamble in this week’s Newsroom, and it’s one that could land him in prison for the foreseeable future.

There are more convenient ways to get out of wedding planning, dude.

Read on for the highlights of “Main Justice.”

ACN UNDER SIEGE | Gary Cooper NotThatOne sings a jaunty tune — the title track from Anything Goes, for those of you keeping track of Aaron Sorkin’s musical-theater references this season — as he enters the newsroom. But he stops short when he sees FBI agents crawling all over the place.

Mac’s agent friend Molly and her crew are still in the process of searching for information leading to the identity of Neal’s source, and the situation is getting heated. Here’s a sentence I never thought I’d write: Will is the voice of calm reason throughout. (Side note: I know!) “They’re just doing their jobs,” he reminds everyone. “And so am I,” replies Charlie, picking up a phone and beginning the process of breaking into the network’s current broadcast to go live with footage of the raid.

Gary grabs a camera. Don, Jim and Maggie — hilarious in their technical inepitude — hit the control room. Sloan mans the anchor desk. And even though Charlie has absolutely no intention of showing the search to ACN’s Saturday-night audience, the FBI doesn’t know that. So Molly orders the team to stand down, and Rebecca works out a deal with the government: a one-week cease-fire, after which Will & Co. will meet with the Department of Justice.

Two things: Will knows Neal is “safe,” and Will knows the identity of Neal’s source. But he assures Mac that there’s no way Justice will hold him in contempt for refusing to give up the name of the source, because he’s a famous TV newsman. “I’m too big to jail,” he says.

GEEZ, JIM | Maggie comes to Jim for help making her EPA segment pop. “SO you want this to feel more like a Jim Harper segment and less like a Maggie Jordan segment,” he says. Yes, Jim. That’s exactly what she meant, only you said it in a much douchier way. But he agree to help her turn her over-highlighted copy of the embargoed doomsday report into something that won’t make viewers change the channel. 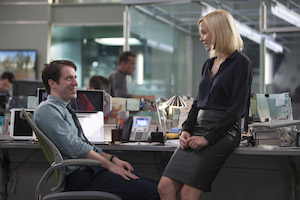 Later, at home with Hallie, Jim takes the condescension a step further when he makes her feel bad about accepting a job at a Web site that offers bonuses for employees who hit traffic metrics each quarter. Jim is shocked, shocked! that this type of arrangement exists in modern journalism; meanwhile, I’m shocked that this is the first he’s hearing of it.

He argues that reporters who are paid extra when they amass a certain number of clicks are very likely to focus on what’s likely to draw those clicks and not necessarily on what’s newsworthy. She argues that the value in anyone — even his heroes Edward R. Murrow and Will McAvoy — lies in how much money they can make for their employer. Then Jim explicitly tells her “don’t take this job” and implies that she’d sell him out in order to make her bonus, which turns his girlfriend incandescent with fury.

Maggie guesses Jim’s the problem the next day, and when he argues that he wasn’t “a d—k to Hallie,” she counters that he was “a little bit Dickensian in your special way that says, ‘I love you, but you suck.'” To Harper’s credit, he realizes that maybe she’s right. Turning on studio lights, figuring out relationship problems: Is there anything new, confident, normally coiffed Maggie can’t do?

MEET THE NEW BOSS | Remember how Leona promised Reese’s twin half-siblings she’d be able to come up with $4 billion in 10 days? Yeah, she can’t. So she’s probably going to spin off Atlantis World Media’s news division — that’s ACN — and sell it to a very rich man with very bad ideas. (More on that in a minute.)

Charlie, Will, et al. will meet the potential buyer, Lucas Pruitt, at the White House Correspondents’ Dinner on Saturday — a day after they have the meeting at Main Justice. McAvoy says he can’t go to the dinner, because he railed about the ridiculousness of it on the air the year before. Too bad, Charlie says, because they’re all going. “This is a sad day for dignity,” Mac notes. “I’ll need a dress.”

THE FATIGUE OF JUSTICE | Barry is the assistant attorney general for national security, and — based on how he opens the Main Justice meeting by telling the ACN team they’re going to be responsible for dead U.S. operatives — he does not like the fact that he has to deal with Rebecca, Will, Mac and Charlie.

Barry knows Neal is in Venezuela, but that’s not the only info that surprises Will: Barry also knows that Will gave Neal his credit card to buy the air-gap computer Neal used to get the classified documents. “You engineered this whole thing so Neal cleared out and you were left holding the bag,” the assistant AG says. Will uses his inside voice as he admits that yes, he engineered the situation, but no, he won’t be cooperating — and he knows that he’s too big a celebrity to wind up behind bars. (Side note: Do you think Mac told Will she asked Jim and Don to get word to Neal to come home?) Now, who feels like a party?

PARTY LINES | Nearly all of your ACN favorites are dressed fancy at a post-Correspondents’ Dinner bash: Don and Sloan, who try (and fail) to escape the notice of the network’s new, anti-fraternizing head of HR; Maggie and Jack, her Amtrak seatmate; Hallie and Jim, who seem to have made up; Mac, who is approached by Neal’s source (played by a gorgeous Clea DuVall, American Horror Story) and told she has a finite amount of time before the source releases the story herself; Will, who entertains a room full of fans with the tale of interviewing Maggie’s doom-and-gloom EPA guy; and Charlie, who realizes 30 seconds into meeting potential buyer Pruitt (The Office‘s B.J. Novak, basically playing Ryan Howard: The Later Years) that the guy is a nightmare.

Pruitt natters on about how his ideal news set-up would be completely crowdsourced — “We could have a channel devoted to people stalking Danny Glover” — and I already hate him. (No wait, that’s not fair. I hated him right from the Schweppes bitter lemon thing.) There will be those of you who inevitably say, “Wait, you were all about crowdsourcing two episodes back! You suck!” And while I do condone using social media as one of many newsgathering tools, what Pruitt proposes is just insane. Also? As we all know, Danny Glover is too old for that ish.

PARTY FOUL | Will probably will be bothered by Pruitt, as well, when he gets the opportunity to meet him. But that’s not going to happen right yet, because a nervous guy from the Department of Justice hands McAvoy a subpoena while he’s taking photos with fans. Will is being called in front of an investigative grand jury. “You think its possible I’m not as big a TV star as I thought?” he muses.