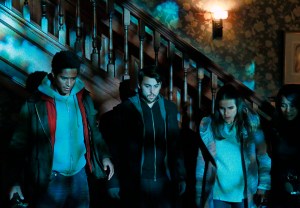 Necessity may be the mother of invention, but a desire to keep ABC’s How to Get Away With Murder fresh and exciting will lead to the show’s reinvention when it returns from its holiday break on Jan. 29 (10/9c), says creator and executive producer Peter Nowalk.

Indeed, with the “Who Killed Sam?” mystery — though not its inevitable fallout — wrapped up in last Thursday’s Winter Finale, the flipping coin/twirling cheerleader/flash-forward construct that defined the freshman smash’s first nine episodes will be put to rest. [If you need a refresher on what went down in the hour, read our full episode recap here.]

“We talked about [continuing the flash-forwards], but they just felt gimmicky. You never want to feel like you’re getting spoon-fed the same thing over and over again,” Nowalk explains. “We’ll continue to wonder what people know and when they know it. That’s what we’re always trying to challenge the audience with, that question. We won’t always understand characters’ behaviors, and within episodes going forward, we’ll flash back to something that helps the behaviors make sense.”

TVLine caught up with Nowalk to dish the Winter Finale’s epic Annalise-Sam blowout, the reasons for the steely law professor’s lengthy voice-mail message to her dead husband and whether the show is setting up Type A Michaela for a major fall.

TVLINE | Let me get one thing out of the way: Can you confirm 100 percent that Wes struck the fatal blow to Sam’s head? A few readers have noted we didn’t actually see Wes swinging. We saw blood splatter on Rebecca’s face — then seconds later, we cut to Wes with the blood trophy. Can you confirm definitively?
Yeah, yeah. Wes definitely killed him. There’s no way he was able to take the trophy out of someone else’s hand in that 20 seconds of screen time. [Laughs.]

TVLINE | The assumption that Sam killed Lila, though…
That is an assumption. I will say that, and that will be dealt with in future episodes.

TVLINE | We know that the Keating Four — Wes, Michaela, Laurel and Connor — plus Rebecca and Annalise… there are a lot of lies going on, a lot of side alliances. How ugly can we expect things to get as the police begin to investigate Sam’s disappearance?
You can expect high drama. There are different allegiances. There are trust factors. There are people playing for their own survival. There’s also groupthink. So it’s messy, that’s what I’ll say. Whether it gets ugly or dark, everyone will see eventually, but it definitely gets very messy and complicated, and the tensions are running high between every character. All of their previous relationships get turned on their heads.

TVLINE | Have you already determined how the season will end, or is that still up for grabs?
We have ideas of how we want the season to end. Since the beginning, we’ve always adjusted along the way, but we have a direction we want to go in. There are still a lot of questions that we have to answer, and we’re deciding when we want to answer them and how. The fun part for me is I don’t know everything when I start it. If I did, then I’d just be really mean to the actors who are always like, “What happens next?” I really don’t always know, and I also always want to keep the option of changing my mind and completely reversing course from something we set in motion. 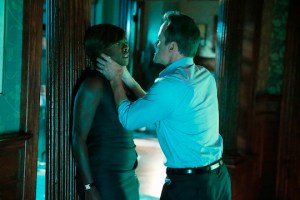 TVLINE | I want to talk about a couple of specific scenes from the Winter Finale, and first is the Annalise/Sam fight. That had to be one of the ugliest, if not the ugliest, marital spat I’ve every seen on film.
That’s the best compliment you could ever give us. [Laughs.]

TVLINE | We really got to see Sam as this shark-eyed monster in that moment, telling Annalise that she’s nothing but a disgusting slut. And of course she comes back at him with her confession about the affair with Nate, and the graphic details of their trysts. Walk me through that moment.
I remember sitting down with Viola and saying, “We’re always going to build to this great Virginia Woolf-esque fight. I’m not saying it was that well written. [Laughs.] I don’t ever want to compare myself to a great playwright, but we wanted it to be a showdown. And because it’s the last time we’re going to see the character of Sam alive, not in a flashback, we really needed to end things with fireworks. The fight, although, yes, it’s dark and nasty and mean, it was all called for, honestly, given everything that the two of them have been going through and also the 20 years of marriage that they have between them.

As I told Tom Verica, “Yes, he’s saying these awful things. But I don’t think anyone in the show is just good or evil.” People in the heat of the moment will say anything to wound, and they’ll say things specifically that will wound the deepest. Who else knows how to hurt someone more than a person to whom they’ve been married to for 20 years? They know exactly what words to use that will cut the deepest.

TVLINE | Later, Annalise leaves that lengthy voice mail begging Sam to come home, essentially saying all is forgiven. But later we learn she already knew Sam was dead when she was making that phone call. I wonder: Is there a part of her that’s genuinely sad and regretful, who is using this moment to say goodbye to Sam? Or is this merely an exercise in creating an alibi and creating doubt in the mid of some future jury?
Everyone’s going to try to fill in the pieces of the holes themselves, so I don’t want to say any one thing was exactly one way or the other. The voicemail, for me, worked on so many levels, and that’s what I hoped people would feel when they watched it. I watched it with some friends, and I could feel them get really uncomfortable during that scene: I don’t know if they didn’t believe it or if it just felt like a turn they didn’t want Annalise to make, and that’s what I freaking love. As long as people don’t turn off the TV, I feel like we have to push it to this level of where you kind of hate a character. You hate what they’re doing, and it makes you cringe for them, and you don’t believe them. That’s what Viola is so genius at playing, all of those things at once, and just also making even the most incongruous behaviors believable.

TVLINE | We saw a number of mistakes being made in the course of the Murder Night cover up, and I feel like Michaela made a lot of them: Losing her ring, not wearing gloves when they disposed of the body in the Dumpster. Should we be worried about where she might end the season?
You should be worried about everyone. I think they’re human. So, by nature, mistakes were made that night. It’s not easy to get away with murder, so again, you should worry about everyone — for sure.