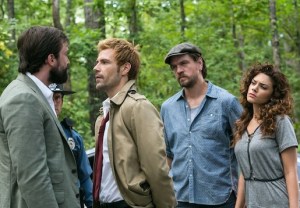 Det. Jim Corrigan first shows his face in this Friday’s Constantine, but the spectre of his involvement with John’s gang will loom large for episodes to come. (Fans of the DC Comics will see what we did there. Everyone else, well, you’ll get it eventually.)

During the hour, Constantine & Co. travel to New Orleans to investigate a string of crimes. Corrigan (played by Irish actor Emmett Scanlan) is a local cop who witnesses something he can’t believe and eventually, reluctantly accepts help from John, Chas and Zed.

TVLine recently took part in a media tour of the NBC series’ Atlanta set to find out what’s ahead for the demon-stuffed drama. Stars Angelica Celaya, Harold Perrineau and Charles Halford gave a group of reporters the inside track, starting with Corrigan’s entrance in Friday’s “Danse Vaudou.”

Press PLAY on the video below to watch Corrigan interact with Constantine, Chas and Zed. Then, read on for all the scary scoop.

DON’T MESS WITH CHAS | Constantine’s right-hand man “doesn’t like anybody messing with John,” Halford says. So when Corrigan “comes in pretty heavy and gets in our way of doing our job,” it rankles the quiet Chas. “He’s just so arrogant,” Halford adds, noting the irony. “It’s funny because, so is John.” And while Chas and Jim don’t end the hour tossing back beers, “Chas is accepting of who his friends accept,” Halford says. “I’d say the door is open to a friendship there.” 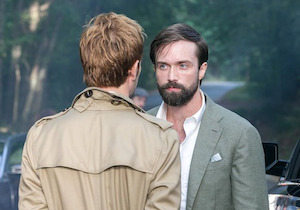 WHAT’S GOING ON IN ZED’S HEAD? | Friday’s episode will give us a taste of Zed’s mysterious back story — and you might be surprised by whom she chooses to open up a little. “Let’s just say that maybe John is the last one to find out about Zed’s past,” Celaya says, laughing.

YOU AIN’T SEEN NOTHIN’ YET | Remember how much taking on Gary Lester’s addiction messed Zed up in the previous episode? Prepare for much, much worse. “Oh my God, in the cliffhanger for our break, there’s a way bigger connection than Gary Lester,” Celaya says. “Way bigger. More powerful.”

A MANNY WITH A MISSION | Let’s back up a minute, here: Exactly who or what tasked Manny with getting all up in John’s spiritual grill? “I wonder that, myself,” Perrineau says. Who appointed him? Or did he appoint himself? He clearly has his own agenda, and as the season goes on, you’ll find out more about that.”

FRIENDS WITH BENEFITS? | That wink-wink vibe between John and Zed? Yeah, you’re not imagining it. “They’re always flirting,” Celaya says. “It’s always there. Zed has been waiting for John for years. He’s finally there. She can’t let him go.”