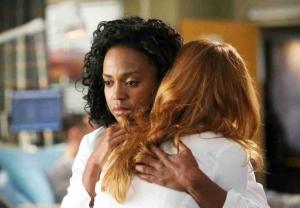 Hope your healthcare provider covers primetime drama-related heartache, because it certainly seems a likely side effect of having watched this week’s winter finale of Grey’s Anatomy. Not only did Derek and Meredith have a blowout that made their recent arguments seem like mere tiffs by comparison, but Stephanie — as if it wasn’t awkward enough for her to be performing an ultrasound on the woman for whom her boyfriend dumped her! — discovered that April and Jackson’s unborn baby wasn’t long for this world. And those were just the tragic highlights. Read on, and we’ll do a fuller assessment of “Risk”…

AT ODDS | Well, it had to happen. After weeks of Derek and Mer fighting off and on (and on and on… ) — not to mention his admission to Amelia last week that he was utterly miserable — the fit finally hit the shan. It all started when Maggie paged Mer rather than Richard to weigh in on a patient-care dispute with Derek, and Grey sided with her half sister rather than her husband. To make matters worse, Derek then called in Richard for a second (fourth?) opinion and tried to pull rank on Maggie, prompting Mer to stick up for her sister. (Finally!) While the sibs performed the surgery that they felt was right – it went fine, by the way – Derek and Richard commiserated and even went so far as to liken them to Ellis. (Really, guys?) As the hour came to a close, Richard’s disagreement with Maggie actually seemed to have brought them closer by giving them medicine to discuss. On the other hand, the differing opinions about the case sparked a battle royal between Derek and Mer. Eventually, he reminded her that he “gave up everything” for her. And, when he revealed that an emissary from the White House had come by that day to RE-offer him the position that he vacated, Mer said, “You should take it.” Which he did, angrily picking up the phone right that second to do so. In the end, they were both so pissed that they didn’t even go home together.

PLAYING DETECTIVE | Though Herman tried to eat her way through every Ben & Jerry’s flavor before she croaked, it hardly sweetened her disposition. In fact, when Arizona pushed her for more information about her condition, Herman dumped her from a surgery. Undaunted, Arizona went behind her mentor’s back and had her medical records sent over… to an unwitting Amelia! When Amelia found out, rather than run right to Herman, she discussed possible side effects with Arizona (who lied that everyone who needed to know about Herman’s diagnosis did know). Off that discussion, Arizona went looking for Herman and found her getting it on with Dr. Ethan Haas from Masters of Sex! Arizona suspected that it was a symptom of the tumor, but Herman corrected her: “It was a symptom of dying soon.” But get this: She wasn’t necessarily dying soon! Since Amelia had access to Herman’s records, she studied them and, as the episode neared its conclusion, told Arizona that she thought she could remove the tumor!

KID STUFF | At first, it seemed like the scene in which Stephanie practiced giving ultrasounds on April was going to be kinda uncomfy and cute — especially after the resident accidentally revealed to the mom-to-be that the baby was a boy. (And then April fibbed to Jackson so that he could still be surprised on labor day.) But then Stephanie noticed something amiss and took her concerns to Arizona, who, in turn, took them to Herman. Sadly, it appeared that the fetus had a very rare condition that meant, if it was born, it wouldn’t live for very long. All Arizona could do, Herman said, was be there for her friends. Later, Stephanie again approached Herman, hoping to get a different prognosis. Instead, Herman just repeated the bad news… within earshot of Jackson. What was that all about? he asked Stephanie, leaving her in possibly the most awful position imaginable.

BLAME GAME | When Callie let one of her veterans push himself too hard – against Owen’s wishes – the young man wound up taking a devastating fall that left him in a coma. Understandably angry, Owen lashed out at Callie for not realizing that guys who are used to defusing bombs don’t – can’t – see the danger in something as seemingly safe as doing physical therapy. Even the patient’s buddy took her to task. (On the plus side, in the middle of this crappy, crappy day, she and Arizona shared a nice-ish moment. Callie even admitted that she missed her wife. “Just not enough,” Arizona noted.) In the end, Callie told Owen that she wanted to step back from the program, but Owen wouldn’t let her.

ELSEWHERE | After nearly being demoted last week, Amelia bonded with Owen by telling him the whole story of her past addiction. In turn, he offered his support, should she ever need it. (Cue the romance in 3, 2… ) Jo complained to Alex that, with Mer always in his bed and Arizona in the shower, “I actually feel like I’m part of a commune.” But she mellowed out after he explained the significance of the house and its open-door policy. And, throughout the episode, Bailey stuck with her health kick, drinking kale shakes and keeping herself moving.

OK, your turn. What did you think of the episode? Were you upset or relieved that Derek finally accepted the D.C. offer? And, if you were Stephanie, would you be able to tell Jackson the truth? Grade the episode below, then hit the comments!