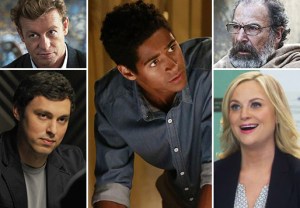 Question: I am loving How to Get Away With Murder. Any scoop? —Katie
Ausiello: Remember how Alfred Enoch’s “puppy dog” Wes shared with Rebecca in Episode 7 that his mother committed suicide when he was only 12? Series creator Peter Nowalk teases that viewers should “definitely pay attention to” that tidbit of background information. “That was a big bomb. It was buried in a bunch of information that was not significant, and it explains a lot of Wes’ behavior; it explains that he has a deep sadness, a loneliness. It maybe explains a little of his ‘damsel-in-distress-rescue syndrome,’ too,” continues Nowalk. “It’s a question: ‘How did [Wes’ mother] kill herself? Why did she kill herself? What happened to Wes after that? And how did that impact who he was?’ What happens to us as children completely determines our psychology and our behavior after that. [That death], basically, blew apart his life.” Nowalk also hints that even though Wes doesn’t come from the “shark-feeding” upper-class world inhabited by most of his Middleton University cohorts, he’s actually “much stronger than people think at first glance. Wes has been through things that are worse than any of [his Keating Five counterparts]. He knows how to shut down his emotions in the dramatic events of Murder Night.”

Question: Any scoop on next month’s Flash/Arrow crossover? —Mason
Ausiello: We’ll learn that The Flash‘s Captain Boomerang (played by Spartacus vet Nick Tarabay) has a surprising connection to Starling City. As exec producer Greg Berlanti teases: “He’s got a relationship to one of our recurring [Arrow] characters, but I shouldn’t say who.” Yes, you should, GB! Grrr. BONUS SPOILER: The Weather Wizard is returning! No, not the one that brewed a storm in the pilot — his brother. Turns out that Mark Mardon survived the same plane crash that his kin was in, and as such possesses the same, but lethally refined, weather-controlling powers. Oh, and he wants Detective West (AKA Clyde’s killer) dead. Translation: The forecast calls for a s–tstorm.

Question: I would love Arrow spoilers. —Ashley
Ausiello: The official logline for the show’s Dec. 10 holiday episode confirms that Dinah Lance (played by Alex Kingston) is back, which begs the Q: Does that put pressure on Laurel to tell her family the truth about Sara? “Laurel has a really emotional journey about that in that episode, for sure,” Berlanti tells us. “Whenever we get that whole family together, especially subsequent to stuff that’s happened, it will bring a lot of that to surface.” 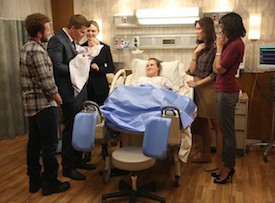 Question: Any scoop on this Thursday’s Bones episode, the one where Daisy gives birth? I’ve already seen a photo of Booth holding Sweets Jr. (*sobs*) —Emma
Ausiello: The delivery won’t be as dour as you might expect, given the circumstances. “Maybe it was supposed to be dramatic, but I don’t think I’m capable of that,” Carla Gallo previews with a chuckle. “I feel like to do a dramatic birth is too upsetting for anyone to watch.” That said, Sweets’ presence — or lack thereof — “looms large” in the hospital room, she promises.

Question: I was wondering if you have any spoilers or Banshee? —Wood83
Ausiello: Yes, but these next four scoops are for Don, the Aushole from last week’s AA who sent me those Smurfs pics from Paris:
♦ Season 3 will pick up a few weeks after Season 2
♦ The show will finally head to Camp Genoa
♦ Expect a Banshee-style payback for what happened to Deputy Yawners
♦ Did you see this?!

Question: I’m seriously missing my Pawnee pals. How dare they keep us waiting after a season closer like that?! I may be a little premature, but do you have any hints of what’s coming on Parks and Rec? —Grace
Ausiello: I can tell you what — or, rather, who — is not coming: Mayor Gunderson. Exec Producer Mike Schur tells us it’s unlikely the final season will introduce us to the MIA politico. “I don’t think you’ll ever meet him,” he says. “There’s an episode that has Mayor Gunderson in its fabric, so there is some discussion of him. But I don’t think you’ll ever see him walk on camera and wave and say hi.” 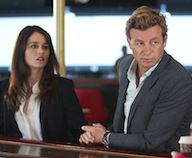 Question: Anything on The Mentalist? I’m dying over here! —Laura
Ausiello: Interesting choice of words, considering the CBS drama will conclude its seven-season run with a two-part episode that revolves around a menacing new serial killer who goes by the name “Lazarus.” An exterminator by trade, Lazzie (as I call him) conceals psychopathic tendencies underneath his unprepossessing exterior.

Question: Do you have any scoop on Sons of Anarchy? -Christina
Ausiello: Jax and Wendy probably won’t be riding off into the sunset in the series finale. At least that’s not where Drea de Matteo sees them heading. “I don’t know if that’s the right ending for a show of this nature and for a writer like Kurt [Sutter], who has always played against the Hollywood-generic-plot-point kind of thing,” she muses. “It could be something that people imagine happening after the ending, like how The Sopranos ending made people go, ‘What the f–k happened here? Did they go on? Are they dead?’ I think Wendy would love for them to end up together. But I don’t think we’re there yet.” BONUS SPOILER: Tonight’s episode may well be Charlie Hunnam’s finest hour (er, 90 minutes).

Question: Any intel on NCIS? —Marsha
Ausiello: The Dec. 16 holiday episode (which also doubles as the fall finale) marks the return of three notorious cyber terrorists: Former Systems Administrator Kevin Hussein (played by Ethan Rains), Heidi Partridge (Erin Allin O’Reilly) and  Ajay Khan (Vik Sahay). In the wake of a city-wide Internet blackout the week before Christmas, the NCIS team pulls the trio out of prison to help with the case, and, whaddaya know, I’ve got an exclusive first look at their comeback below! 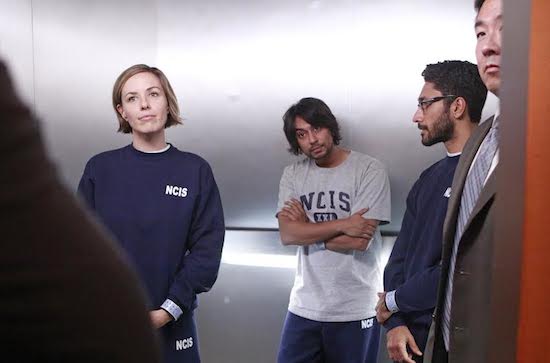 Question: Any scoop for WGN’s Salem now that it’s been renewed for a second season? It’s my new guilty pleasure! —Raymond
Ausiello: Your new guilty pleasure is about to get even more sinful. When the show returns in April, Mary will cross paths with two men who sound like they’re going to be as dangerous as hot: Samuel Wainwright, a cold-hearted but quick-witted surgeon whose predilection for sadism would make Christian Grey blush, and Baron Sebastian Von Marburg, a 250-year-old Dorian Gray type whose “anything goes” approach to sex is the antithesis of puritanical. In addition to these series regular roles, Salem is also casting a pivotal recurring part: the ancient (and yet gorgeous) Countess Von Marburg, Sebastian’s mother and, if she has her way, Mary’s future mother-in-law!

Question: Anything on White Collar‘s final season? —Stacey
Ausiello: The series finale will feature quite a few storyline and character callbacks, exec producer Jeff Eastin promises. “My hope is that people who are real fans of the show, who’ve stuck with us this entire time, will not be disappointed,” he tells us. BONUS SPOILER: Eastin vaguely teases that Diana and Jones will “continue on and move up” in the last episode.

Question: So you will answer some inane question about Monroe and Rosalee’s honeymoon on Grimm, but you won’t answer my question about whether the sharks on Shark Tank ever go back and make a deal with a contestant whom they have turned down on the show but then had second thoughts about a possible deal? I’ve been loyal to you. Don’t you like me anymore? —Mike
Ausiello: Of course I like you, Mike! That’s why I’m going to give you more of the Grimm scoop for which you so ardently clamor! Silas Weir Mitchell recently gave TVLine a little inside intel on the upcoming Christmas episode. “It’s hilarious and it’s totally messed up,” he said. “There’s a thing that happens to a certain subset of Wesen” around the holidays, and “it’s similar to Krampus, in a way, because it has to do with the seasonal thing.” Weir wouldn’t tell us 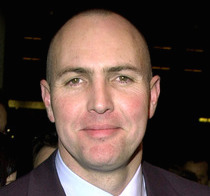 which of the show’s Wesen will be affected, but he couldn’t speak highly enough of the episode. “It’s another level of Grimm: absurd, funny, ugly, dark and great.” BONUS SCOOP: Go-to TV Big Bad Arnold Vosloo (24, Chuck) will guest-star in an early 2015 episode as Jonathon Wilde, a Manticore bounty hunter from Texas working on behalf of the Wesen Council.

Question: Need Sleepy Hollow scoop! —Liz
Ausiello: New character Orion, who’ll make his appearance after the winter break, may just prove himself a gift from the heavens for Abbie. “She sees in him someone who is actually completely living for what they believe, and finds that really inspiring and maybe even decides to sort of follow him in that,” Nicole Beharie tells TVLine. No word on what Ichabod will think of that…

Question: Whatever happened to Rafael’s sister Luisa from Jane the Virgin? Is the character gone? —Julia
Ausiello: “She is coming back with a bang,” co-star Justin Baldoni teases of his onscreen sibling, played by Yara Martinez. “It’s a very funny situation and wherever your mind takes you, go there, because these writers are hilarious with the things that they have her and us doing.”

Question: Long time no Person of Interest scoop! Anything you could share? – Riddick
Ausiello: How about an exclusive clip from tonight’s episode, in which Reese — who this week is instructing at the police academy to mind the latest POI — touches base with his (almost flirty?) NYPD shrink:

Question: Please, please, can you give us some Homeland scoop? —Jules
Ausiello: This Sunday’s episode ranks among the Top 5 best Homeland episodes ever. Much of the focus is on the prisoner swap — Saul in exchange for those half-dozen terrorists — and Carrie’s familiar feeling that something is amiss. I’m not going to tell you if her suspicions turn out to be correct, but I will tell you to make sure the edge of the seat is comfortable, because you’ll be fused to it during much of the hour. 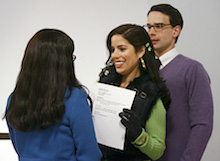 Question: Any news for Covert Affairs? —Melissa
Ausiello: Ugly Betty reunion alert! Ana Ortiz, who has been racking up some serious guest-star credits during her Devious Maids hiatus, will next turn up in the Season 5 finale of Covert Affairs (which stars her onetime Ugly Betty colleague Chris Gorham). She’ll play Karen Coughlin, a political advisor known on the Hill as “the wolf in chic clothing.” Karen approaches a seasoned Beltway insider with the opportunity to enter into the political arena.

Question: Do you know anything about a possible love interest for Major Crimes’ Lt. Provenza? —Luana
Ausiello: As a matter of fact, Matt Mitovich just got off the horn with series creator James Duff, who had this to share about the certain someone who is poised to change the grizzled detective’s life: “Provenza ends up attracted to someone he never thought he would be attracted to. He felt like the book was closed on the romantic part of his life, and now that book is suddenly reopened.”