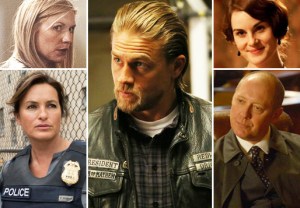 Question: Any scoops about Homeland? —Anna
Ausiello: My spies in South Africa — yes, my network of moles spans the globe — tell me that the show recently shot an elaborate funeral sequence at a chapel in Cape Town presumably to air in the season finale. I have my theories about the identity of the dearly departed, but I’m more interested in who you think it is. Hit the comments!

Question: Not too many weeks left I can ask this — what can you tell me about Sons of Anarchy? —Joel
Ausiello: This week’s episode really earns its TV-MA rating. There is more nudity (female and male) and graphic sex (male-female, male-male, etc) in the first four minutes than the entire season combined. There’s also an eye-popping display of violence that ranks among the show’s most gruesome ever — and that is one mighty high bar. It also happens to be this year’s strongest episode, due in no small part to one particular scene towards the end of the 90-minute installment that’s been five seasons in the making (and which does not disappoint).

Question: Thanks for the Good Wife scoop on Alicia’s mock debate, but do you have anything on the actual debate? —Ken
Ausiello: It sounds like Florrick Vs. Prady will escalate the old saying “if you can’t take the heat, stay out of the kitchen” to new (and possibly hilarious) heights. Slated as Episode 12 of the current sixth season — and penned by showrunners Robert and Michelle King (always an exciting sign, yes?) — the hour will find Alicia and David Hyde Pierce’s Frank starting (or perhaps winding down) their war of words in a hotel kitchen. There, a pair of intelligent, articulate, African-American busboys named Tim and Errol will interject their own views into the scrimmage. The episode will also introduce us to the possibly recurring character of Franny, the “smart, sophisticated” chief of staff for the mayor of Chicago, who’s described as being anywhere from 35 to 60 and wielding a set of “brass knuckles” (psychological, we hope, not literal) with which she intimidates and bullies those who get in her way. She’ll be “doing damage control for the absent mayor” — while opening a window to an aspect of Chicago’s political scene which The Good Wife has rarely visited. Bonus scoop: We’re not 100 percent certain he’ll be moderating, but producers are also casting the guest role of Jackson, a smart but self-righteous “journalist-turned-blogger” who harasses Alicia “about a personal matter” during the televised debate. (Quick! Somebody cover Grace’s eyes and ears!)

Question: Do you have any information on what chaos we can expect from the Braverman clan in the few remaining episodes of Parenthood‘s final season? — Nic
Ausiello: Much like this season began with a health scare that united all of the Bravermans, the series’ final episodes will once again bring the family together over a larger issue. “Instead of being so segregated with each storyline, there’s one storyline that pulls us all in,” notes Monica Potter. “That’s the crux of the rest of the season. It’s going to be really sad, but it’s going to be really good.”

Question: I’m in need of some Parenthood scoop! I’ll take anything at this point, though my preference is Joel and Julia. — Gabrielle
Ausiello: Despite Joel’s proclamation of love at the end of last week’s hour, he and Julia aren’t out of the woods quite yet. “Julia is still kind of dizzy from his profession,” Sam Jaeger says of the couple’s dynamic in upcoming episodes. “He really put himself out there, and we’ll see Julia struggling to figure out where she stands.”

Question: I would love a scoop on The Middle. —Clay
Ausiello: I’ve got scoop, Clay, but I’m not entirely sure you’re gonna love it — since it involves a death in the family. Indeed, Season 6, Episode 12, titled “Hecks on a Train,” finds the family headed to South Dakota for Aunt Edie’s (Jeanette Miller) funeral. (Sniffle.) The show is currently casting for a trio of colorful characters that the Hecks will encounter on their way to the somber event — including an unfriendly, unmotivated thirtysomething bartender; a rebellious 13-year-old boy who hits it off with Brick (and convinces him to pilfer a beer); and a warm, sympathetic funeral director. Nope, it appears the laugh train won’t stop in the face of family heartbreak.

Question: Any plans for Elementary to bring back Mycroft or Irene Adler/Moriarty? —Agnes
Ausiello: Probably and maybe. “We would absolutely love to bring Rhys [Ifans] back as Mycroft,” executive producer Rob Doherty says of Sherlock’s bro. “It’s something we are investigating. I think it will ultimately come down to his schedule. He’s a busy guy, for good reason.” That goes double for in-demand Game of Thrones actress Natalie Dormer, who plays Irene Adler/Moriarty. “I was amazed that we were able to get her for even the one episode she was in [last season],” the EP notes. “So, yes, same set of circumstances. We could not love them more, and so, if we can find the right story and the time in their schedules, we would love to have them back.”

Question: What’s coming up on Sleepy Hollow? —Lili
Ausiello: We know a bit about why Ichabod was chosen to become a Witness, but not much about why Abbie got picked for the job. Next week’s episode, “Mama” — in which Aunjanue Ellis debuts as Abbie and Jenny’s mom — fills in some of those holes. And according to someone in the know, Lyndie Greenwood and Nicole Beharie are amazing in the very emotional hour.

Question: What can you tell us about The Blacklist‘s Super Bowl episode? —Ben
Ausiello: NBC is looking to add a little A-list action to the Super-powered hour. A casting notice just went out seeking “star names” to play Jasper, the fiftysomething Director of the National Clandestine Services. Jasper’s in charge of the multi-national group that runs the worlds’ most powerful figures. He’ll also be around beyond Feb. 1, since the role is recurring.

Question: Heard a rumor that Matthew Goode is going to be on the Christmas episode of Downton Abbey. Is he staying on for Season 6 — and, if so — does that mean he’s leaving The Good Wife?! Say it ain’t so! —Evelyn
Ausiello: While it’s true Goode will appear in Downton‘s annual Xmas episode — aka the Season 5 finale — it’s my understanding that, as of now, it was just a one-off guest stint. But I hear Abbey producers are interested in having him back for Season 6 in some capacity. His Good Wife gig is in first position, which, loosely translated, means if The Good Wife picks up his contract option for Season 7, he pretty much has to return to The Good Wife. (BTW, buzz that he’s playing a love interest for Lady Mary on Downton is apparently true. Girlfriend’s dance card overfloweth!)

Question: It seems like Covert Affairs just wants to give us little nuggets of information about Annie’s health issues. Can you give us anything more than that? —Jenna
Ausiello: Not much more, but executive producer Chris Ord tells us that Annie’s heart condition “will still be a big part of what she needs to deal with going forward” this season. EP Matt Corman, meanwhile, hints that said health issue will “take on new complexities.”

Question: OK, so, I’m in desperate need of NCIS: LA scoop. —Leah
Ausiello: The show’s Christmas episode — titled “Humbug” — will introduce us to Sam’s teenage son Isaac. Described as all-American and physically fit (chip off the old block!), Isaac is home for the holidays (on break from the military school he’s attending). Casting is underway!

Question: Do you have any scoop on Law & Order: SVU? —Giselle
Ausiello: This week’s Chicago Fire/Chicago P.D./SVU crossover stunt will feature some entertaining first meetings, none more so than Wednesday’s inaugural collaboration between P.D.‘s Voight and SVU‘s Benson. Chicago Fire and P.D. executive producer Matt Olmstead calls the duo’s “by turns adversarial and collegial” dynamic “the most impactful pairing” of the three-episode event, adding, “It was like a long-awaited title fight between two undefeated champions.” Adds SVU EP Warren Leight: “The moment Benson confronts Voight about his interrogation ‘techniques’ is one of my favorites. They go right at each other.” (BTW, Part 1 starts tonight on Fire, and leads into Wednesday’s P.D./SVU episodes.)

Question: Anything on Revenge? These past couple of episodes have been intense! — Julius
Ausiello: “Intense” is putting it mildly, Julius, and you’ll be happy to know that Season 4 isn’t showing any signs of slowing down. In fact, we’re about to meet another shadow from Louise’s past — and not an imaginary one this time. Revenge is introducing her brother Lyman, a manipulative politician who uses his Southern charm to mask his true intentions. 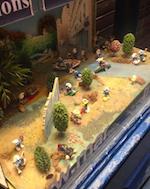 Question: Believe it or not, I was in Paris for a few days on vacation and I was walking down the street when I saw this Smurf display (photo, right). It was actually in the window of a real estate agent’s office! And I knew – I just knew – that I needed to take pictures for you. Not even asking for any scoop in return! (Although I do love Banshee.)  —Don
Ausiello: That is one sad Smurf display, but I love that it made you think of me, so I owe you a Banshee scoop.

Question: Are Grimm‘s Monroe and Rosalee ever going to take their honeymoon? —Mirna
Ausiello: Silas Weir Mitchell kept mum on that topic when TVLine recently asked him, but he was happy to talk about the trouble the newlyweds are about to run into, starting this week. The fact that they are intermarried Wesen who’ve befriended a Grimm will earn them some haters in the supernatural community. “Once that’s out in the world, the genie is out of the bottle, and we’re in trouble,” he said, adding that the hatred will eventually make the blutbad or his wife — or both! — fear for their lives.