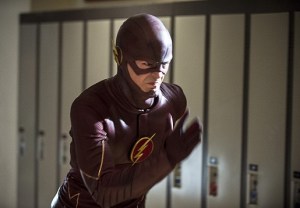 The Flash has shown restraint when it comes to what its costumed crusader can do — but that won’t be the case for much longer, executive producer Greg Berlanti revealed to TVLine following his Film Independent panel at LACMA last Wednesday. In fact, Berlanti added, one of The Flash’s iconic powers will soon come into play in a big way.

Below, the EP also discusses the introduction of Grodd, the big confession Barry may make to Iris and upcoming tweaks to the titular hero’s costume. And on the heels of next month’s Arrow/The Flash crossover, the uber producer weighs in on the possibility of another similarly huge event.

TVLINE | Am I wrong in reading the situation as it just being a matter of time before Barry has to tell Iris either that he loves her or that he’s The Flash in order to salvage their relationship?
One hundred percent. I think that’s a fair assessment. One of those two things will be revealed soon enough.

TVLINE | You had a pretty juicy tease there at the end of the last episode about Grodd. Is that something that’s going to be more teased rather than introduced?
I wouldn’t say teased. I would say we’re going to deal with it this year. The comparison I make is a little bit to Slade the first year on Arrow in the sense of we started with the mask in the pilot and then we saw which way we were going. He was, ultimately, in the back half of that first season even more than we would ever do with Grodd this first year because… We’re going to have to get the technology right and all the stuff right to make it look and feel real. But a lot of times, we do this stuff not as a tease as much as a challenge to ourselves of, “Can we do it?” Grodd’s definitely one of those, so we hope we pull it off.

TVLINE | We saw so many different abilities with the last episode — running on water, running up a building, changing his voice. Are there other special abilities still to come?
Oh, he has tons. Definitely. We’re holding back on some big ones still. He famously can phase through things. We haven’t seen him do that yet.

TVLINE | And time travel?
That is the one that we deal with directly in the winter. We, obviously, hint at it from the pilot episode. That is a big — “theme” is the wrong word for it — but that is a big part of the DNA of who The Flash was, so we do deal with that. 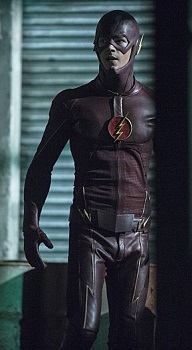 TVLINE | And with his suit being destroyed by the bomb, is now the time when you’re going to evolve his costume?
We’ll keep evolving it and tweaking it as we go. I think people are waiting to see when it’s going to be a white emblem versus a red.

TVLINE | Are there any big crossovers with Arrow planned for the second half of the season?
We just started talking about that. It’s so much fun to do. They’re so hard to do. But I think they’ll be so rewarding for everybody, ultimately, that that’s our hope, for sure.

Flash fans, what are you most excited to see when it comes to the speedster?