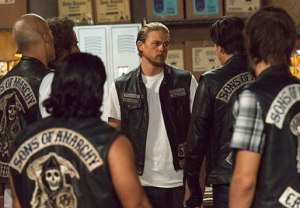 That brutal honesty, delivered to Jax via Unser on Tuesday’s Sons of Anarchy, is a criticism that many of you have offered in TVLine’s comments section this season for SAMCRO’s tortured president.

Throughout the past 10 episodes, Jax has concealed his heartache about Tara’s death with violence, blindly retaliating against the Chinese and August Marks after Gemma pinned her crime on someone else. He hasn’t visited his wife’s grave or spent much time with his children, one of whom is silently unraveling in a way that’s terrifying for a 5-year-old.

So, if Unser’s remark to Jax has also crossed your mind at some point during Sons‘ final season, I can’t say I blame you.

All of that said? By the end of this week’s episode, it’s hard to feel anything but sympathy for Jax, as the world he knows begins to crumble around him. Here’s what goes down in the tense, breathtaking hour:

YOU CAN’T HANDLE THE TRUTH | We pick up where last week’s hour left off, the morning after Abel revealed the truth about Tara’s murder. Taking his son’s devastating inquiry to heart, Jax quickly pursues anyone else who can confirm that Gemma did, in fact, kill her daughter-in-law. And after Wendy confesses that she, Gemma and Unser were protecting Juice for the last few weeks, Jax becomes exponentially more suspicious. The million-dollar question: Why did Juice run to Gemma for protection in the first place?

To get the answer, Jax first tracks down Unser, who can only offer scarce details about the night Tara was killed: Gemma called Unser soon after she found Tara’s body, and even though she was an emotional wreck, she made no mention of any Chinese gang members skulking around the house. Plus, Unser reveals to Jax that Chris Dunn — the man who’s been blamed for the entire ordeal, whose head Jax impaled in the season premiere — wasn’t even in the state at the time Tara was attacked. Needless to say, Jax’s fears reach their crescendo with this new information, and he uses Unser and Ron Tully to secure a face-to-face meeting with Juice at Stockton’s prison — a meeting that won’t be recorded on video.

The pow-wow takes place later that afternoon — after Juice has made good on his promise to (1) find out who ratted the location of Lin’s stolen guns (it was Barosky who spilled the beans, not the dearly departed Jury), and (2) kill Lin after getting his confession on video. With his part of the bargain upheld, Juice faces a distraught Jax and learns that Jax wants the truth about Tara’s murder. And just like that — after we’ve spent 10 episodes wondering if Jax will ever learn the real story — Juice confesses what really went down the night Tara died.

Forgive me if I’m gushing — oh, who am I kidding, I’m definitely gushing — but the scene that takes place between Jax and Juice ranks as one of the most gripping in Sons history. Charlie Hunnam is spectacular here as Jax falls apart, hearing the exact news he’d feared he would, and Theo Rossi is also terrific as he tells Jax the story using careful, measured words. (Confession: I watched this scene three times, and each time found myself involuntarily holding my breath. So good!) Jax then informs Juice of the damage that’s been caused by the Chinese lie he spun with Gemma. “Thank you for telling me the truth,” he says to his former brother, before adding, “I’ll make sure it’s quick.” (And before the episode is over, Juice’s fate is essentially sealed as two prison guards beat him senseless in his cell.)

WHERE IN THE WORLD IS GEMMA TELLER? | On the other side of this ordeal, there’s Gemma, who begins to realize she’s in hot water upon arriving at Teller-Morrow that morning. Unser, fresh off his suspicious conversation with Jax, grills Gemma about the circumstances that led her to protect Juice these last few weeks. Gemma can’t come up with a believable lie fast enough, and she hurries out of the auto shop when she learns Jax and Juice are about to speak in person.

Things get even more dire for Mama Teller when Juice informs her that he’s told Jax the truth. She packs a getaway bag and, with the help of Chuckie, is able to scoot out of her house before any SAMCRO members can find her. From there, Gemma flits around Charming for the rest of the afternoon, managing to elude Jax and the club. She pays Abel a final visit at school, offering him the same SAMCRO ring she gave Jax when he became a member of the club. She also stops by the church where her father preached back in the day. It’s there that she meets up with Nero, who quickly realizes her fond childhood reminiscences sound more like a Dear John letter than happy memories. And when Jax calls Nero, demanding to know where Gemma is, Nero finally learns the truth of what his old lady did to Tara all those weeks ago. “Is that true?” Nero asks, and Gemma solemnly replies that it is. And so ends that love affair. 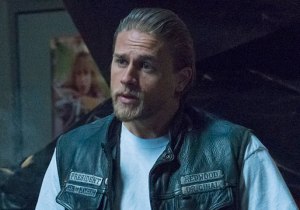 ‘HOW COULD SHE DO THIS?’ | After learning that Juice killed Lin in prison that morning, Unser believes that Jax double-crossed him — an act that Unser swore would break his loyalty from SAMCRO forever. The two men quickly get heated, and after Jax punches Unser in the face, the former police chief orders Jarry to put out an APB on Jax. (Which always goes well in Charming.) The cops track down Jax at Stockton later that afternoon, and before Jax can get any face time with Barosky, he’s sent running from the cops in a frantic car chase (that has a hilarious score, might I add).

Jax ultimately avoids the police department’s clutches for now, settling down at the Mayan headquarters graciously offered by Alvarez. The rest of SAMCRO catches up in time, and Jax gathers his brothers around the table for what is probably their most tense club meeting ever — and that’s really saying something. “The Chinese didn’t kill Tara. Gemma did,” Jax tells them, before taking full responsibility for all the lives that have been lost during his blind quest for vengeance. Despite Chibs’ protests, Jax decides he’ll meet with the other Sons of Anarchy presidents and come clean about how Jury was murdered. And considering the organization isn’t thrilled about Jax’s leadership to begin with, SAMCRO’s president could be dangerously close to leaving the club behind for good.

Before the hour is over, Jax is once again forced to confront the horrible crime his mother has committed. Nero visits Jax at the Mayan offices and — in a scene that features more stellar performances from Hunnam and Jimmy Smits — tells Jax that killing his mother would be “a wound that’s too deep to heal. That’s going to swallow you up. That’s going to destroy you, man.”

Jax sheepishly confesses that, despite the enormous mess Gemma has made, she’s still his mom and he still loves her. In the episode’s final moments — before we see Gemma driving far, far away from Charming, that is — Jax buries his face in his hands and sobs, “How could she do this to Tara? How could she do this?”

And with that, I’m simultaneously blinking back tears and applauding this roller-coaster ride of an episode. But what did you think? Hit the comments with your thoughts on the episode.