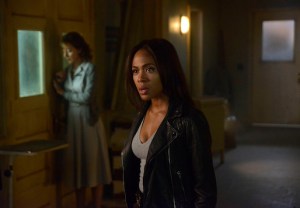 Sweet fancy Moloch, Ichabod, get your house in order.

If Sleepy Hollow‘s Nicole Beharie could intervene on behalf of her on-screen alter ego, she’d likely say something along those lines to Mills’ time-transplanted partner, whose focus as of late has been… shall we say, compromised?

“I think Abbie is the more proactive Witness this season. She’s the one who believes more and tries to actually get things done, where Ichabod seems to be thinking a lot about his family and [is] a little bit distracted,” Beharie says. “So, Abbie has to take it for what it is and move forward and try to fight whatever the bad entity is.”

Lt. Mills, though, will have a rather large distraction of her own in this Monday’s episode (Fox, 9/8c), when her long-dead mother, Lori, suddenly makes her presence known.

The hour is all Abbie, all the time — and TVLine chatted with the actress about reuniting with guest star Aunjanue Ellis (The Mentalist), softening Mills (but not too much) and getting romantic advice from someone more than 200 years old.

Below, watch an exclusive clip from the episode and then scroll down to read what Beharie has to say.

TVLINE | You had worked with Aunjanue Ellis before, correct?
We worked together on a film called The Express. She’s just a powerhouse… She’s just phenomenal in this part. She brings so much energy and passion out of nowhere. She was so quiet on set that I was like, “Is she going to be able to set it off in time?” The minute they yelled “Action!,” she would just bring all of this magic. We worked together before in a completely different capacity where we’re in corsets and pantyhose [in the film], and now we’re running around a psychiatric ward. So, it was really different, but it was lovely to have her on the Sleepy Hollow set.

TVLINE | You’ve said in the past we don’t really know why Abbie is a Witness. We do find out a little bit in this episode. Is there more coming up? Will we get more about what drew fate to choose her?
I don’t know. To be completely honest, it’s something I would love. One of the things I love about this job is, you read a script and you’re like, “Oh my God, that’s where we’re going with this.” I get excited about how people will react to it and what they’ll think and whether or not it fulfills some of the bits and pieces that we’ve been establishing. It’s like a garden. We’re sowing these little seeds, and some of them turn into something amazing, and some of them are like, that didn’t really work.

I think it probably is high time. It’s been almost two seasons, and we’re toward the end of it. I don’t know though. I’m sort of holding my breath.

TVLINE | You seem to be playing Abbie more vulnerable this season. Was that a conscious decision?
It’s definitely something that I’ve noticed in the writing and in the editing of the show. I think the intent is to make her softer in a way. I think what it’s been calling for me to do as an actor, or for the audience, is take the ride. Abbie has to hold back her rebellious spirit, in a way… The other Abbie was in a foster home and broke into stores and had a little bit of a drug problem. Now, she’s cautious about hitting a big red button and being like, “You know what? This is what we’re going to do.” She definitely wants to make sure that she maintains a good relationship with Crane because there is, like I said earlier, that bigger picture and he has a lot at stake, a lot of things could be compromised.

When I heard that they were doing a big episode about the mom and the backstory and Jenny, I was like, “Oh my God, it’s going to be the big, sisters-kicking-ass moment.” It [wound up] a little bit more of a vulnerable tale… I would personally like to see them fight a little bit more. You know, get it done. Everyone knows that they’re vulnerable and there’s so much at stake. We didn’t actually have that conversation, but there is [a sense] of her having to hold back in order to keep the team together. If she is her usual angry self that we saw in the pilot and in the first season — not even angry, just in command — if she’s that person, then I think there would be a lot more issues with the way that things have been going this year. 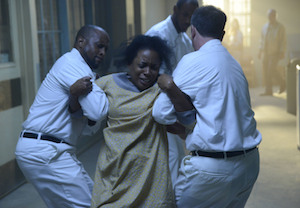 TVLINE | I loved so much the scene in the last episode where you can tell Abbie’s getting so fed up with Katrina, and then it just blows and they have that “I was here first” argument.
Yeah, but that was still played under, I think.

TVLINE | Really?
Yeah. I think if the world’s coming to an end and your partner is choosing his family over the entire planet and the future of the world, there is definitely room for a little bit more heat. I think she’s definitely holding back. Again, like I was saying earlier, there could be a payoff there. I think things are bubbling.

TVLINE | We still haven’t seen Abbie and Crane deal with the fact that he lied to her when he recreated the map to Purgatory. They have not dealt with that yet on screen. Have you guys shot anything like that?
No, we haven’t. I think they had to just sort of get over that. There’s a lot at stake, you know. It’s almost like, because everything is so massive, something like that turns into spilt milk. You know, it’s a tiny thing, and in the end it worked out for them. That’s all that really matters: It worked out.

TVLINE | There’s a very sweet moment between you and Lyndie Greenwood in the episode, right before you watch a video of your mom. Did you guys talk a lot about that scene? How did you approach that?
We move so fast on the show. You just have to be present. I’m lucky to be working with the entire cast. I really think we have the greatest cast ever. Everyone is moving at the speed of light to learn the material and bring it to life. We basically just got the material, show up and do the scene. There wasn’t a lot of conversation about it or anything. I think we’re just really focused and we both know that this is a great opportunity to bring their story to life, so we’re both committed to that.

TVLINE | Let’s talk for a minute about Hawley. There’s a subtle flirtation going on there, and in the last episode, Crane gave Abbie his blessing. Is his approval something she cares about, do you think?
Not at all. She doesn’t care. He doesn’t have his family stuff together in the least. You don’t take marriage advice from somebody with a shaky situation. [Laughs] No. If you stay tuned, you’ll see where that relationship is going.

TVLINE | There’s been a lot of talk of faith this season. Abbie told Ichabod, early on, that she worried that her faith in him will be her undoing. Do you think she worries he won’t choose their mission over his family?
I don’t know. I think that’s the whole conversation of their relationship in the season… He keeps making these choices that are not the best for the mission. I think they could be a lot further along if they were focused.

TVLINE | How has your relationship with Tom Mison changed since the pilot?
We definitely have more of a shorthand, because we spend a lot of time together. We both came from being on stage, and this is our first big TV gig, so we already had a shorthand and now it’s even more telekinesis sometimes. [Laughs] Like, we just know when we have a look… or when there’s an extra funny beat that we can find in the moment or something like that.

TVLINE | I’ve noticed he’s someone who laughs easily. Do you try to make him break during scenes?
No. I think Tom is pretty focused. Someone who I actually do mess with during scenes is Lyndie, sometimes. I can definitely do little things. Like if she has a reaction, I’ll try something new. She listens really, really well, so if you change something she’s there with you. Actually Orlando [Jones] can play a lot, too, but Tom is not as playful actually. He’s a little bit more serious, and he normally also has to memorize like five pages of historical dialogue. So, I tend not to mess with him when he’s doing that.