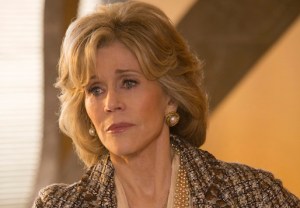 This week’s Newsroom brings back a move the series introduced in its second season: Leona ex machina.

It’s a dramatic device that happens when the queen of Atlantis World Media swans into a scene and instantly solves the problem at hand, kicking butt in designer heels while she’s at it.

Remember how Jane Fonda’s character showed up at the end of the “Red Team III” episode, just in time to reject Charlie, Mac and Will’s resignations over the Genoa debacle? Leona ex machina!

And then, at the end of last season’s finale, when the Mrs. Lansing decreed that Reese would decide the News Night team’s fate, and he picked that moment to act like a human being? Leona ex machina! (Or maybe Reese ex machina, with an assist from mom?)

This week, Leona winds up at a meeting between her son and his step-siblings, she utters precisely the words everyone wants to hear: She can afford to pay enough to keep AWM exactly the way it is. Leona ex machi—

Wait, what? She’s not exactly telling the truth? And meanwhile, one of her employees is poised to do serious time for a federal crime? Read on to find out what happens in “Run.”

THE HIGH PRICE OF SIBLING RIVALRY | The twins to whom Reese referred in the season premiere enter an AWM conference room, and I know this is going to be fun when I see 2 Broke Girls‘ Kat Dennings is playing Reese’s half-sister, Blair. (Props, too, to We Are Men‘s Chris Smith, for playing the other twin, Randy, as a complete idiot.)

Let’s shorthand the business stuff so we can get to the name-calling quicker, OK? The twins will turn 25 in 10 days, at which time they will own 45 percent of AWM. (Their dad, who is Leona’s ex-husband and Reese’s father, left it to them when he died.) As Sloan discovered in the previous episode, a company called Savannah Capital has bought 6 percent of the company without anyone noticing; Savannah is offering the twins a lot of money for their shares, and the twins are gunning to sell.

Reese is not close with his half-siblings, which becomes apparent when Blair calls him a douche. “Yes, I am, but I’m a douche on the side of the angels,” he says (Heh), explaining that AWM could make more money if it either got rid of or changed a lot of things about its news division, but that jettisoning and/or changing would not be in the public interest. Charlie makes a similar argument when he enters the discussion — after hilariously getting Randy and Blair mixed up — but Blair could care less about carrying on ACN’s legacy.

The conversation gets heated, Reese throws a mug and the proceedings stall out before Leona shows up, unannounced. In a few fabulous minutes, she susses out that the twins could care less about owning an international media company; they just want to stick it to their father’s ex-wife and make a buttload of money while they do it. So they agree to Leona’s offer of $4 billion for their shares — which is more than Savannah Capital is offering — but Blair makes it clear she doesn’t think Reese’s mom can pull it together in 10 days.

She’s right; just after the twins exit, Reese and Charlie make it clear to Leona that she’s rich, but nowhere near that rich. She reminds them that she scraped together a seemingly unattainable amount to buy the traveling theater company that put her on the path to mogul-dom, and she’ll be able to do this. The men don’t seem so sure.

HALLIDAY ON THE CASE | Downstairs, in the ACN newsroom, Neal’s secret source problem is about to get a lot more problematic. “I would love it if you guys stopped committing federal crimes,” Rebecca Halliday announces as she enters the room where Will has been prepping the staffer in question to talk with her. (Let’s just get this out of the way up front: Marcia Gay Harden is the best guest star this show has had or will ever have. Everyone is just better when they’re in scenes with her. The defense rests.)

Rebecca hears the story of how Neal acquired the classified government documents, then confirms what Charlie told him last week: “You’ve committed espionage.” She also lists about 200 other laws he’s broken, then tops it off by reminding him that there’s no First Amendment protection for what he’s done.

Will says it’s not a problem, because the government won’t find out about the leak unless News Night contacts them to verify the documents, and that’s not going to happen because the story’s not going to run. Neal — rather peevishly, in my opinion, for someone who has seriously messed up — declares that they will run the story.

SEE YA, SAMPAT | Mac returns from a trip to the gun range with her FBI-agent friend Molly (In Plain Sight‘s Mary McCormack) and sides with Neal: Mac asked, in a hypothetical manner, what would happen to a reporter in Neal’s position, and Molly replied, “The answer is: nothing.” The U.S. government has never prosecuted a journalist under the Espionage Act; the worst he’ll get, Molly told Mac, is contempt of court for refusing to name his source.

Neal brazenly says he’d consider getting thrown in jail for contempt of court “a badge of honor.” Will replies, “Be sure to show your badge to your roommates when you get there.” (Side note: This scene, on the whole, is very strong: It’s funny (“I can out-ass anyone in the tri-state area”), it’s educational, it moves the plot along and it is the kind of thing I will miss when Newsroom goes dark.)

The arguing continues after Don and Sloan show up — more on them in a minute — but all you need to know is that, at one point, Will stares at Neal and then takes him outside for a chat. Will makes it clear that he respects Neal’s decision, then asks him to reveal his source and closes by offering some tips on how to go on the lam.

See, what Will realizes is that, during a trip to the men’s room, Neal called the government himself in order to force the network’s hand: Now, ACN has to address the story one way or another. Sure enough, the FBI shows up — led by Mac’s friend, Molly, and another agent — looking for Neal. And as the agency prepares for an unprecedented search of a news organization (one that would be rather unlikely in real life, but we can deal with that next week), Neal sneaks out, destroys his phone and disappears… all thanks to a tip from Will, via a secret note written on a take-out menu.

RAIL TALK | While riding Amtrak on the way back to New York after covering the Boston bombings, Maggie realizes that a senior Environmental Protection Agency official (played by The Office‘s Paul Lieberstein) is having an off-the-record conversation with another reporter via phone — and the EPA guy is bashing the Obama administration pretty hard. She slinks into the seat behind EPA guy and presses “Record” on her iPhone, then confronts him after his call is finished.

EPA guy, whose name is Richard, argues that his comments were off the record. She argues that they were off the record for the reporter with whom he was conversing, not her, plus: He’s speaking in a public space with no assumption of privacy. (Side note: As someone who frequently rides trains, I am shocked by how much information people share in this fashion. What I’ve most often overheard is doctors and lawyers having detailed conversations about patients or clients. Takeaway: You never know who’s listening!)

Richard makes Maggie feel bad for being sneaky, so she reconsiders and tells him that she won’t do anything with his comments. But that reversal works in her favor, because he’s so freaked that he eventually offers her another story in exchange: an embargoed report saying that carbon dioxide levels are worse than they’ve ever been, and an on-the-record interview with him. And if this season isn’t already going exponentially better for Ms. Jordan than the last one did, her trip is topped by a sweet law ethics professor asking for her number.

HALLIE LOSES ANOTHER JOB | Hallie tweets something very terrible about Republicans being happy about the Boston tragedy, and when The Daily Caller picks up the story, Charlie fires her. She totally knows it’s coming and feels bad about what she did; yet, when she outs herself on Twitter as the person behind the ACN tweet — the network just referred to her as a “low-level staffer” — Jim warns her that people who hate ACN may offer her jobs just because she has an axe to grind. She seems irked that he’d think anyone would hire her for anything other than her Vassar-bred talent. A little friction there, eh?

“I CAN’T EMPHASIZE THIS ENOUGH: WAFFLES” | And now, for my favorite part of the hour: the Don and Sloan show. He bought some stock she recommended. She points out that he did so waaaaay before she mentioned it on the air, and that her recommendation came from some inside info, so… “Congratulations,” she says. “We’re white collar criminals.”

However, this will not deter them from finishing breakfast together. Sloan proves she’s once again my spirit animal when she says, “I don’t know why, if given the choice, anyone wouldn’t get the buffet.” And Don brings up that, per the ACN employee handbook, his stock-buying is only a problem if they’re a couple. She pretends not to hear when he asks if they’re a thing, plays dumb and then repeats his question — all moves that Don recognizes from the Keefer playbook. (If you’ve been reading these recaps since the beginning of the series, you’ll remember that I haaaaaaaaaated Don back then. Now, I adore him. What can I say? As Sloan goes, so goes my nation.)

The matter’s not settled when he asks her to his parents’ 40th anniversary party, and she freaks out. He then reveals that there is no party: The question was a test, and he failed. After a very funny interlude where Jim learns that his co-workers are shagging, Sloan counters by telling Don that she loves him… and then guffawing as he chokes. See, that was a test, too — or was it? — and the executive producer did not do well. Still, Sloan later outs her and Don’s couplehood to Will (who could really care less), so that’s something.