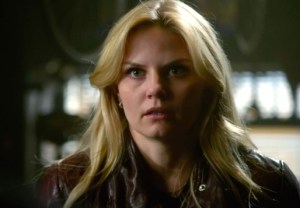 This Sunday on Once Upon a Time, just as Elizabeth Mitchell foretold, the ABC drama served up a “sweeping, epic” two-hour episode — and one of the series’ very best since the pilot.

In short: Flashbacks revealed to us how, despite the sisters’ own plot to dupe Ingrid, the Snow Queen was the one who turned the tables, leading Anna to trap Elsa in the urn. Snow Queen lost the urn to Rumple, and then cedes the Sorcerer’s Hat to the elderly apprentice, in trade for transport to our realm circa 1982, with the promise that she’d reunite with Elsa as well as meet her “perfect” match third “sister,” who was about to be born.

Meanwhile in Storybrooke, Rumple was more than happy to “help” Emma with her out-of-control magic, secretly plotting to collect her/them in the Sorcerer’s Hat. But luckily, Elsa showed up in time to argue the case for staying special by holding onto her magic. Still, Rumple came out ahead for the day by securing the “secret ingredient” he needs to free himself from the dagger’s bidding — the heart of someone who knew him before he became the Dark One, and that ticker belonged to Hook, who now is the Crocodile’s puppet. Regina scored a win as well, as in the afterglow of their night together, Robin Hood came across a clue of sorts to the storybook’s origin, in the form of a page suggesting an alternate course of events had they in fact met that night at the pub.

At hour’s end, Snow Queen emerged triumphant — for now — by planting the ribbons on herself, Emma and Elsa, thus giving her the power of all three “sisters” and using it to unleash the curse of Shattered Sight upon Storybrooke.

Here now, in strictly chronological-by-realm order, are my Top 20 moments from “Smash the Mirror” (plus a dozen or so super sound bites):

20 | Ingrid explaining to the Sorcerer’s apprentice her desire to reclaim the happiness of “three girls running with a kite,” by finding a new, third magical sister. It all sounds so benign! 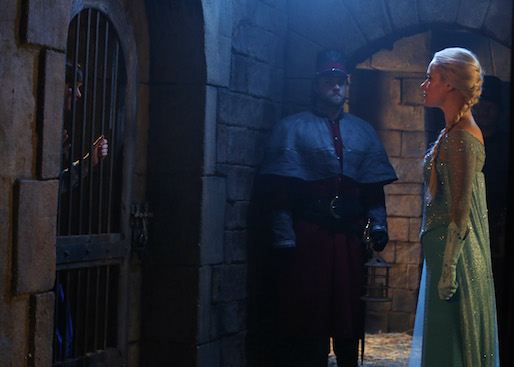 19 | Elsa chewing out imprisoned Anna, as an act for the guards.

17 | Under the spell of Shattered Sight, Anna acts like a real brat to Elsa — but in doing so probably shares some of the actual psychological damage her off-limits sis thrust upon her during their Frozen childhood.

16 | Ingrid realizing, “Everyone sees me as a monster, so maybe it’s time to embrace that and be one,” first by freezing the castle and Anna/Kristoff. Chilling.

15 | The Sorcerer’s apprentice providing Ingrid with a portal to The Land Without Magic circa 1982. 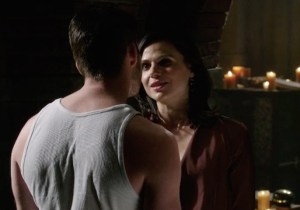 about the best (ahem) “sleep” he’s had in a very long time, Regina acknowledges that she should have chosen him over evil back at the pub. (And then they resume their “first time”….)

12 | Mary Margaret and David spending a good-sized scene debating if Emma is making a mistake by getting rid of her powers — that while the magic makes her the Savior, maybe giving it up is a heroic act? (But as Regina soon enough reminds the Charmings, they should support Emma’s specialness just as she supported Henry.)

11 | Regina heals Henry, then hears what else is hurting him — the thought that he is “just ordinary.” But as she reminds, he has the Heart of the Truest Believer, and as such has made so much good happen.

10 | Hook’s lengthy voice message for Emma, in which he comes clean about his recent sins (of omission). “I wanted to be a better man, but I failed,” he laments.

9 | One of this season’s deleted Mary Margaret/Regina scenes refashioned into a lengthy talk whilst searching for Emma. Mary Margaret notes how she and David have overcome obstacles because they have hope (ding-ding, 25 cents please!), then tells her frenemy, “You are not all evil, I am not all good.” When Regina counters, “You’re the hero and I am the villain, free will be damned,” Mary Margaret insists, “It doesn’t matter what I believe, only that you do.”

8 | Will Scarlett first “breaking into” the open library, then helping Robin rummage through books of the pop-up and Dr. Seuss variety. (But where did that Alternate Page XXIII come from, hmm? Anyone else eyeballing the library’s dark, scary underbelly and who once roamed there?)

7 | Emma asks Rumple if he would enter the mansion room where the “spell” has been cast, and him admitting, “I wouldn’t go in there for anything” because, he has repeatedly realized, he always undoes the good, he always chooses power — a sad truth that (a horribly, conspicuously MIA) Belle probably is well aware of.

6 | When it appears that Emma will be lost to the hat, Rumple taunts Hook about now having a new vengeance to pursue 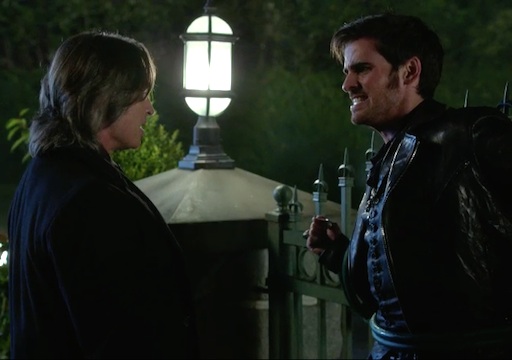 in life. And then, when his plan goes awry….

5 | Rumple explaining his need for a specific kind of heart — “and as luck would have it, dearie, you’re my oldest friend!”

4 | Elsa arriving to save Emma by explaining how it’s not just Anna’s or Henry’s love that saves them, but their love of self, magical warts and all. After some thought, Emma takes Elsa’s outreached hand, and her powers simmah down.

3 | “I owe someone a quarter!” (Regina, when Robin produces “hope” in the former of the mysterious other Page XXIII.)

2 | Magic-embracing Emma treating her family to a fireworks display.

1 | Super-charged Snow Queen suggesting to Rumple, “I can probably even defeat you, and decorate this place with your bones.” And you believe her.

THE NOTABLE & QUOTABLE
* “Makes me wonder why we didn’t do this a few decades ago.”
* “You’d think a big yellow driving machine would be easier to find.”
* “Is ice cream too obvious? We should lose the ice cream.”
* “That’d make for a quite macabre sight at Granny’s.”
* “You might want to finish buttoning your shirt, first.”
* “I left my talking phone in the back of your truck.” “It’s just called a ‘phone.'”
* “We should probably look into hiring some new guards when this is over.”
* “We’re not talking about a pair of Jimmy Choos here!”
* “This could be the worst idea you’ve ever had — and you hired the Wicked Witch as your nanny.”
* “Do you know what I regret most?” “The countless innocent lives you’ve destroyed…?”
* “Why would a cat want a hat?” “I’ve seen stranger.” (Indeed, he has.)
* “You get a quarter from the ‘Hope Association’ every time you say that word.”
* “My happy ending is not a Stephen King book-on-tape.”
* Am I missing some joke about the car book Robin cited?
* I know Bandit Snow has her skillz, but Ruby really should have been helping track Emma, right?

What did you think of the two-hour “Smash the Mirror”? Are CaptainSwan ‘shippers as filled with angst as OutlawQueen fans are flushed with joy?