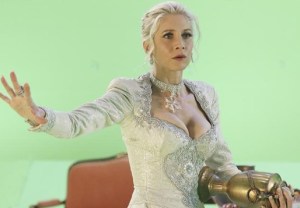 This Sunday on ABC’s Once Upon a Time, the forecast calls for extra amounts of snow, seeing as the episode “Smash the Mirror” was supersized to run two hours (starting at 8/7c).

What chilling face-off will the Snow Queen conjure? What burning questions will be answered? (And where does Ingrid stand on the Regina/Robin situation?) TVLine spoke with Lost/Revolution alum Elizabeth Mitchell about all that, her magically gravity-defying wardrobe and more.

TVLINE | What have you gone and done that they needed to add an extra hour to this week’s episode?
Oh, you know…. [Laughs] We had this amazing director, Eagle [Egillson, for Part 1], and when we were shooting it, I just liked what he was doing. I thought it was so fun and dramatic and kind of just wonderful, like a sweeping, epic fantasy. I guess [the producers] felt like it was so much fun, they wanted to add more. And there’s a lot more, too, with Lana [Parrilla]’s character, which is joyful for me because I love watching her.

TVLINE | If you are following Lana’s storyline, whose team are you on? Do you want Robin to go for it with Regina, or should he be true to Marian?
That’s a hard one, isn’t it? It’s lovely 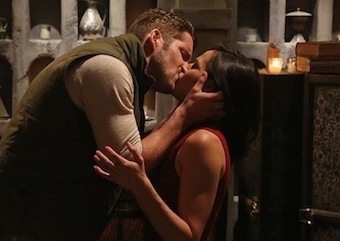 to be true, but I don’t even know if [Robin and Marian] really like each other all that much. So, yeah, unfortunately that is kind of my feeling on that. But Marian’s a lovely girl, so hopefully she’ll find happiness somewhere else.

TVLINE | So, I’m looking at the logline for this two-hour episode. Why is The Snow Queen going to pit Anna versus Elsa?
She’s just trying to find love, so it seems to me that throwing a bit of discord in there always helps people figure out who they really are. I’ve been playing her like a very angry preteen girl because I feel like she was self-aware in that urn for so many years, so I don’t really see where she learned to grow up or any of that stuff. She’s just doing it the best way she knows how. But it’s so hard because you keep wanting to be like, “It’s right in front of you! You have it already,” but that’s why we have all these great antagonists.

TVLINE | If Emma were to lose her powers – and it appears she might try to make that happen this Sunday — would Ingrid lose her interest in her?
Oh my gosh, that’s such a great question because there is something kind of horrifying about the fact that she only deems people who have magic to be interesting, right?

TVLINE | Yeah, she’s elitist that way. She’s “magic-ist.”
She is. Maybe she would [lose interest in Emma], or maybe she’d try to help her get them back. But that’s definitely one of the biggest draws for Ingrid. For her, magic is blood. To her magic is what links everyone together. To her magic is what makes them family. So, I think probably she would [lose interest]. How sad is that?

TVLINE | Is she about to do something that’s going to make us say, “Uh, no. She’s a villain”?
Well, she’s definitely a villain. I mean, you can dress up as pretty as you want, but she’s definitely a villain. Yeah, she’s going to do some pretty bad things, most definitely. She’s a well-drawn protagonist; they did a lovely job with that. You will continue to kind of hate her and then wonder about it, which is good. That’s how it should be. Black-and-white is never as much fun as shades of gray.

TVLINE | Here’s my burning question: What is the key to gliding through a forest without snagging your ornate gown on a twig?
Oh, I’ve snagged my gown so many times, but the key, I think, was to ask them if my character could be barefoot. That way I can feel the twigs coming and kind of navigate them. Had I been in those six-inch, unbelievably gorgeous sparkly heels that they gave me to wear — which I did wear sometimes — that would’ve been impossible. I voted for barefoot and it made it a lot easier, it really did.

TVLINE | In that final pawn shop 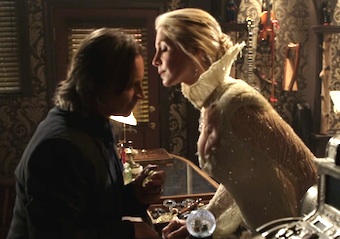 scene, did you whisper the actual secret to Rumplestiltskin freeing himself of the dagger into Bobby Carlyle’s ear? Did you know what it was?
No. I had kind of figured out what it was, but I didn’t want anyone to catch it, so no, I did not. I kind of just hovered my lips near his earlobe. We laughed.

TVLINE | What does your 9-year-old son think of all this?
He thinks it’s really cool! I go to school and his friends are talking to me about it, like, “You’re evil, you’re really bad,” and then they come sit in my lap and give me hugs. It’s the first time I’ve played a character where he’s hearing about it at school, because a lot those things [I act in] you can’t watch when you’re a kid.

TVLINE | That said, he might wish that you were a bit more clothed.
I do have to say there have been a number of people in my family who have been like, “Are you cold?” It’s very interesting, because when the designer came up with the second dress, I said, “That looks lower[-cut] than the first dress,” and he goes, “Yeah, apparently we’ve got to show ‘the girls.'” My best friend sent in a list of names that she felt we should name them. I don’t know that it matters to [my son], although every once in a while he’ll be like, “Mom, could you please look more like a mom?” So, the other day I was wearing sweats and he’s like, “That’s much better.”

TVLINE | There are some lingering questions about Snow Queen. For example, how did she get to our realm? Is that something that will be answered?
In this next episode, actually. It’s really interesting, yeah. I thought that it was smart and brought a new element into the whole thing. I think you’ll like it.

TVLINE | And we’ll learn why she erased everyone’s previous memories of her being in Storybrooke?
Yep. We’re going to figure that one out, too. They wrap up all these little, like, crumbs that they’ve left, which I was grateful for.

TVLINE | It hit me the other week 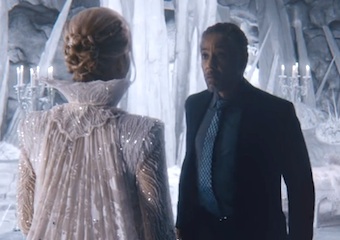 as I’m watching the scene with you and Giancarlo Esposito (who plays Sidney Glass), “Rachel is being awfully nice to Neville.”
I know! It was really funny, that transfer of power. I was wondering how he would be with it, but his character is so completely different [than on Revolution]. He’s so fun to watch.

TVLINE | So, what about those Revolution fans? They’re still yearning for some sort of closure, but everyone on the cast has been keeping pretty busy.
Yeah. I think everyone is pretty busy. It would always be fun to all get back together — we had a great time together, and as a lover of books I always want there to be a beginning, a middle and an end. It’s never fun when you’re kind of just left hanging because you’ve invested, and I think a lot of people invested in that show.

TVLINE | In the meantime, now you get to shower and dress in sparkly clothes. I mean, what an upgrade.
Well, that was basically the thing. When they asked me to do [Once Upon a Time], my grandmother was thrilled. She’s like, “Oh, no more grime! We’ll get to see your face.” She hasn’t said anything about the cleavage yet, but I’m sure she’s appalled!