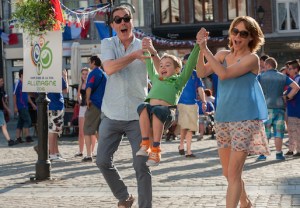 By the 20-minute mark of Starz’s new drama The Missing, affable Brit Tony Hughes has lost sight of his 5-year-old son.

By the 21-minute mark, he’s on his way to losing everything else that matters.

The haunting BBC limited series, which premiered in the United Kingdom weeks ago, begins its limited run on Starz on Saturday (9/8c). James Nesbitt (The Hobbit films) plays Tony, whose life and marriage crumbles to ash after the 2006 kidnapping of his son, Ollie, during a family vacation.

The Missing‘s subject matter draws inevitable comparisons to missing-child cases both real, such as Madeline McCann’s 2007 disappearance in Portugal, and fictional, such as the hit ITV miniseries Broadchurch (and, to some extent, its American adaptation, Gracepoint).

Though it’s at times tough to watch, Nesbitt says that his series’ script — as well as the small mysteries planted in the very first episode and paid off by the end of the limited season — makes it worth sharing the Hughes family’s pain.

“The writing is truthful, it’s non-exploitative, and the characters are believable,” he tells TVLine. “It’s a story that, unbearable as it is, it’s something that we connect to as our worst nightmare, really.”

Read on as the very charming Nesbitt talks about how he got into character (it’s rough), why he hasn’t seen Broadchurch and whether a happy ending is even possible for a character who sustains so much loss.

TVLINE | The series takes place in two timelines — 2006, when Ollie is taken, and 2014, when Tony is still searching for him. It struck me, watching the premiere, how you transform your character into such a broken man.
One of the good challenges was, as it always is in everything you do… is trying to show a truthful depiction of him in both time zones. I worked quite a lot on the physicality of the man in 2006 and in 2014, which really helped me enormously. In 2006, although we hint at dark moments in his past, he’s a strong, charming, successful, likeable, very protective of his family man… Eight years later, to marry his psychological descent with the physicality, he’s much more beaten and kind of stooped. A lot of it was also about filling in the gaps in those eight years and what it must be like to wake up every morning and be hit by the reality of Oliver’s disappearance. 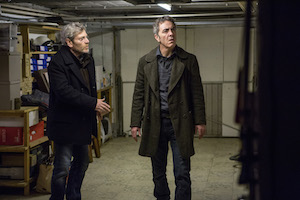 I felt, beforehand, the thing of being a parent myself would be the real hook, would be what I would use most to try and locate Tony’s pain. But actually, if you try to do that as a parent, you can’t. There’s kind of a self-defense mechanism that closed the shutters up the moment I tried to imagine if that happened to either of my daughters. We don’t really allow [ourselves to feel that], because we just can’t bear to imagine it…

So, I decided early on to try and live very much as similar to Tony as I could. Of course I was going to and from work in a rather nice car, but I stayed in an apartment rather than a hotel, I kind of turned my apartment into a Tony den. I got the art department to give me copies of everything that Tony would have so I had Oliver’s pictures, I had little items of Oliver’s clothing in the flat, I had police records and newspapers articles… When I went out, I always had his files. So, it just meant that it was much easier to try and truthfully be this person so that when I was playing a broken man that I sort of was it instead of pretending to be it.

TVLINE | That doesn’t sound like much fun.
Well, you know, no one said it was supposed to be fun. And I don’t mean that flippantly, yes it was grueling at times. But that’s the beauty and the privilege of the craft, that I was chosen to try and discover that… It also helped enormously that we were disconnected by filming in Brussels, so I wasn’t seeing my girls every night. Now, it was also brilliant that I was able to get on the Eurostar on a Friday evening and be back in London in two hours and kind of fall into my daughters’ arms, because you needed that sort of release. Unquestionably.

TVLINE | In addition to who took Ollie and why, the first hour lays out a few side mysteries involving supporting characters — and there’s a question of whether Tony was involved in some shady business in the past?
[Laughs] Well, you’ll have to keep watching. You get answers to all of that.

TVLINE | I have to be honest: When I first heard the premise — even though I’d heard good things about the series — I feared it would be so overwhelmingly sad. But the mystery element helps circumvent that.
Listen, I think that’s the absolute beauty [of it]. Audeinces are too sophisticated nowadays and intelligent, and there’s so much bloody choice… I think if it was exploitative, they would absolutely find it vulgar and distasteful and think, ‘This is not for me.’ It was truthful and not exploitive. We invest in the characters.

TVLINE | What’s your response to those who’d compare this to Broadchurch?
I have a very casual knowledge of Broadchurch. I didn’t watch it. I try not to watch things that I’m not in. [Laughs] I was away during Broadchurch, but I saw bits of it and listen: Olivia Colman is a sensational actress and David [Tenant] is wonderful, and they have a great cast in it. You know what I think the real comparison is? I think that they’re both good television… [Laughs] Clearly, I think ours is much, much better.

TVLINE | It doesn’t happen often, but sometimes missing children are found years after their disappearances. But Emily and Tony are so broken now, even if Ollie resurfaces, is there a possibility of a happy ending for their family?
I think that’s a really good question, I have to say, and one that really hasn’t been asked. What’s interesting about those two is, they are so screwed from the minute it happens… in terms of the destruction that the disappearance causes. Because they weren’t together when he goes. They can never share his disappearance, in a way, because she will always, somewhere in her subconscious, no matter how much she tries to suppress it, blame him. And he will, no matter how much he tries to suppress it, blame himself. I think they’re screwed.