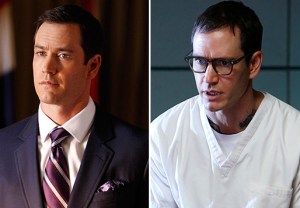 Gosselaar tells TVLine he was drawn to this dual role for the complexity of the characters, adding that Jared is “easier” to play because Paul presents more of a challenge; he’s “darker” and Gosselaar hasn’t quite “figured him out yet.”

And speaking of a challenge, Gosselaar recently filmed a scene for his third episode which finds the brothers talking face to face, forcing him to act opposite, well, himself.

“Both twins are speaking to each other in close proximity for two pages of dialogue,” he says. “It was my first time working with a double who was playing me.”

RELATED Bella Thorne on Her Twisted CSI Role: ‘I Like Playing Mean’ 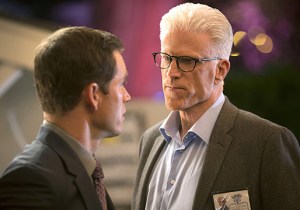 Sunday’s episode, as well as future episodes — Gosselaar is filming his fourth appearance in early 2015 — will delve “deeper into the brothers’ relationship with each other, as well as with Ted Danson’s character,” Gosselaar explains. Just don’t ask him to tell you how it all ends.

“When I showed up for the first episode, I went up to Christopher Barbour, who wrote all the scripts for these episodes, and I was just like, ‘Who did it?'” Gosselaar recalls. “He told me, ‘I don’t know, we’re writing it as we go.’ [Laughs] I think you’ll kind of figure out a little bit more by the third episode, but honestly, I still don’t know who committed the crimes. I think I know who’s behind them, but I’m not sure who committed them.”

In fact, for now, there’s really only one thing Gossellar knows for sure: