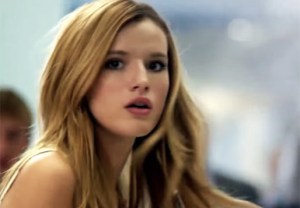 Former Disney Channel star Bella Thorne is adding “murder suspect” to her resumé with a haunting turn on Sunday’s CSI (CBS, 10/9c). So what drew the Shake It Up star to the mean streets of Vegas?

“I love all those [crime] shows, so when they asked me if I wanted to guest-star, I was like, ‘Of course I’m interested!'” Thorne, who plays Hannah Hunt, tells TVLine. “Then I read the script and was like, ‘Oh my God, this is cool.'”

The “cool” script Thorne is referring to finds D.B. Russell and his team investigating the link between a potential murder and a high-school chemistry teacher’s experiment-gone-wrong. And speaking of going wrong, fans of Thorne’s previous work might be a little surprised by her character’s less-than-sunny disposition.

“It’s funny, I like playing mean,” Thorne admits. “You know, funny-mean or Valley Girl-mean. I really want to play as many different types of characters as I can.”

And like most mean girls, there’s a method to Hannah’s madness, which Thorne says is revealed in a surprise twist.

“Even though she’s the captain of the swim team, literacy volunteer of the year and seems like she’s got it all together … there is a moment where you’ll see her break down and show her true colors,” Thorne explains. See adds that Hannah’s particular issue “happens to a lot of girls. It’s a big issue we need to tackle, and I’m glad this show is doing it.”

So what’s next for Thorne? Her upcoming slate of movie roles — including the Steve Carell/Jennifer Garner comedy Alexander and the Terrible, Horrible, No Good, Very Bad Day, out now — is keeping her pretty busy for the foreseeable future. But as far as her small-screen career is concerned, she says she’d never pass up getting to playing a super-villain on a show like The Flash — “There are so many cool female characters in comic books!” she says. “I’d love to play any one of them.” — or taking a trip back in time on one of her favorite dramas, Reign.