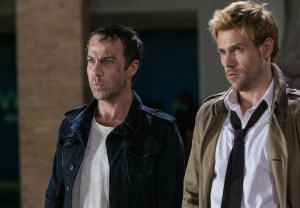 If you’ve been waiting for NBC’s Constantine to pull the trigger on its comic-book mythology — hello, Newcastle Gang aficionados! — the NBC series’ creators think you’ll be very happy with Friday’s episode.

The hour introduces Jonjo O’Neill (The Fall) as Gary Lester, one of Constantine’s Newcastle chums who was involved in little Astra’s death and damnation. When Gary accidentally unleashes a potent demon upon the good people of Georgia, John winds up reuniting with his old pal.

If the plot sounds familiar to readers of D.C. comics, that’s because the story is “literally ripped from the pages of Hellblazer, from the first issue,” Daniel Cerone, executive producer and showrunner, says during a conference call with reporters.

“It’s a fantastic story that translated really well to screen,” he adds. “It’s our show at its pinnacle. It’s really set a bar of everything we hoped this should could be and could do.”

The EPs also dished about what other familiar characters are on their way to the primetime drama, as well as how scary is too scary for the Peacock Net (the answer may surprise you) and whether we’re likely to see Liv ever again. Read on for the best bits.

HOMECOMING WEEKS | Cerone and Goyer expanded on what star Matt Ryan told TVLine earlier in the month: A bunch of characters from Hellblazer are poised to show up in the coming weeks. In addition to the Newcastle crew, there’s Dr. Thirteen and Felix Faust — “You’re gonna meet them all,” Cerone promised. “We’re trying to present the best of both worlds in terms of ongoing mythology… wrapped around weekly stories the viewers can hook into.”

CHAS’ MANY RETURNS | Remember how Chas died — then came back to life — in the series’ premiere? “For some reason, people started translating that to the idea that he’s immortal,” Cerone said. “We promise you: He is not immortal. There’s a very good reason that he’s coming back to life, and the only spoiler I will give you is that these lives are not infinite.” The EP added that an upcoming, flashback-filled episode will introduce Chas’ estranged wife and daughter.

BIGGER! MORE! | Both men said that NBC hadn’t censored one moment of the scary, gory drama; in fact, the Peacock Net has taken the opposite approach. “Every step of the way… be it in the outline phase of the scripts or the cuts that the network were seeing, they’re like, ‘Go further,'” Cerone said. “I don’t know if I could think of any instance in which they said, ‘Tone it down,'” Goyer added.

NEVER SAY NEVER | It seems like there’s no bad blood between Lucy Griffiths — whose character, Liv, was written out after the pilot — and the series’ Powers That Be. “David and I received a lovely email from Lucy… right before we aired,” Cerone says. “If there’s an organic reason to bring [Liv] back into the story, we’d love to.”