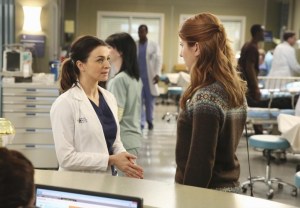 In this week’s Grey’s Anatomy, the very public revelation of Amelia’s checkered past gave Derek more than an opportunity to make a play for her current and his former position as head of neuro, it gave him an opportunity for self-reflection. Trouble was, he didn’t like what he saw. Read on, and I’ll tell you all about it.

PAST IMPERFECT | Derek had been stepping on Amelia’s toes ever since he decided to stay at Grey Sloan. And when, early on in “Can We Start Again, Please?” a family member involved in one of her cases (loudly) revealed troubling details of the doc’s past addiction, her brother defended her and defused the situation leapt in and took over her surgery.

Afterward, Amelia – suddenly the talk of the hospital – turned to Richard for support (and got it, in spades). “It’s the past,” he pointed out, “and you don’t need to defend it.” Unfortunately, when Owen later approached Amelia, she felt that that was what he was asking her to do, and she refused. Worse, when Owen asked Derek if he thought that Amelia was the best person to be head of neuro, his response was… crickets.

Almost immediately, Derek realized that he had given Owen the idea that he should unseat Amelia. (Gee, ya think?) “I will fix it,” he promised her. But the die was already cast: Owen had called an emergency board meeting. “What did you do?!?” a horrified Mer asked Derek. (And just when she was beginning to think they were settling back into a sexy groove, too.)

At the board meeting, Derek stepped up and said that he should have protected Amelia from being outed as a recovering addict. He even admitted that he hadn’t done so for the pettiest of reasons: because he wanted his position back. “She should stay where she is, Owen,” he concluded, adding that he couldn’t do the job any better.

That night, Amelia told Derek that she was moving out. In turn, he said that ever since their father died, he had always wanted to protect her… until she came to Seattle and he saw that she was fine. She no longer needed him to look out for her. What’s more, “I don’t know who I am anymore,” he admitted. “I’m miserable. All I do is hurt… the last people I want to hurt.” And, scarier still, he didn’t know how to get it under control.

MYOB | Elsewhere, Arizona confronted Herman about the impossible position she’d been left in by her mentor’s confession that she’s dying. “I need to know more” before deciding whether to keep the brain tumor a secret from the board, Arizona said. But Herman, charmer that she is, insisted that Arizona wasn’t “entitled” to full disclosure. (At least Herman explained why she was popping pills. “I’m getting a migraine,” she snapped. “You’re not helping.”) And, with one last demand that Arizona hurry and make up her mind, Herman was off to a secret appointment.

Naturally, no sooner was Herman out the door than one of her patients found herself in a bad way. Arizona called her mentor — repeatedly — and, having gotten no response, finally left a message saying that Herman had left her no choice but to handle the case as best she could and report the dying doc to Owen. Thankfully, the surgery went fine – with Alex’s help, Arizona saved the baby. But while she was tending to the preemie, Dr. Haas from Masters of Sex made such a bloody mess of the poor mother that she died!

When at last Herman turned up again, Arizona found her explaining to the father that, even she’d been there instead of Robbins, his wife would have died, anyway. Though Arizona was off the hook, she wouldn’t let Herman off the hook… until she vomited. Then, finally, the ailing M.D. confessed that an aggressive treatment was making her sick. Her walls coming down, however slightly, she offered to teach Arizona the one procedure that might have helped save the mother… that is, if Arizona will keep her secret. Given the chance to save a life, Arizona agreed to remain mum.

FLYING SOLO | Meanwhile, Jo prepared for her first solo surgery by upchucking in the ladies’ room (and assuring Stephanie that, thank God, she isn’t pregnant!) and insisting that she wasn’t in the slightest intimidated by her supervisor, “little bitty Dr. Bailey” — without realizing “the Nazi” was in one of the stalls! As payback – this doesn’t seem entirely professional – Miranda read a magazine during the operation. Luckily, she paid enough attention to know that Jo hadn’t forgotten the vital step that she feared she had. (Mind you, that didn’t stop Bailey from making Jo think that she might have killed her patient!)

BUT WAIT, THERE’S MORE | In other developments, Maggie was miffed about MerDer missing the dinner to which they invited her, so her half sister took her to hang out at Ellis’ old house/Alex’s place; Arizona moved into Alex’s house; and April – shaken by the death of Arizona’s patient – relied on her faith (which, it appears, she’ll need more of next week!).

OK, your turn. What did you think of the episode? Were you ticked that Derek didn’t stick up for Amelia sooner? Hit the comments!