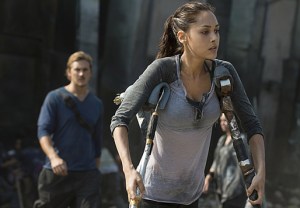 On a show like The CW’s The 100, in which survival skills are everything, Lindsey Morgan admits that her character — who’s practically an amputee at this point — couldn’t be in a worse position.

Below, Morgan spills on the new-ish man in Raven’s life — whom we’ll see on tonight’s episode (9/8c) — as well as the possibility of a reunion with Finn and a major “shift” in the coming weeks.

TVLINE | I hear there’s going to be some “tension” between you and Wick (Steve Talley). Can you say what kind?
Sexual tension! Sexual! [Laughs] No, I’m just kidding. Do you really think I would tell you that? … Their tension comes from having known each other and worked together on the Ark. It’s like going back to high school after you’ve changed; people who knew you then see you now and it’s kind of an uneasy feeling. Wick knew her as this bad-ass chick that could do anything, but now she’s immobile and hurt and vulnerable. She’d rather work with a stranger than this guy because he knows her. 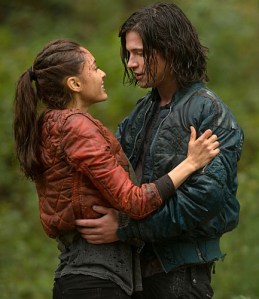 TVLINE | And what about Raven and Finn? In your own words, what’s their relationship now?
Right now, I’d say they’re in the calm after the storm. Raven’s not mad anymore; at the end of the day, he’s still her best friend, her family. She also wouldn’t be alive if Finn hadn’t risked his life to get her the Grounder medicine, and he was there for her during her surgery. He held her hand through it all, and that was all time he could have spent looking for Clarke. He only left because she told him to leave, and she did that because she loves him. She knew, in his heart, he wanted to leave and look for Clarke. It’s all pretty mature.

TVLINE | Oh, come on, Clarke already has Bellamy. She can’t call dibs on every guy!
I know, right? Clarke can share! … So greedy.

TVLINE | This season, with everyone on earth, it feels like there are a million different storylines going on at once. Do you ever get confused?
[Laughs] Yes! It’s insane, but as crazy as things are, I think this season’s pretty awesome. We’re a show with no shortage of story. We give it to the audience as much as we can at full force. Sometimes, I’m like, “We just crammed five episodes into one! Bam!”

TVLINE | Any favorite storylines outside of your own?
So many, are you kidding me? I loved Jaha’s journey back to earth, first of all. Lincoln also has a really cool story coming up where they start to harvest him, which was another favorite to read. And then there’s Finn, Bellamy and Murphy and everything they’re going through. I feel like Raven’s probably the most boring one right now. [Laughs]

TVLINE | With only a few weeks left before the fall finale, what can you tease?
Well, we’re not slowing down anytime soon. I’ll also say there’s going to be a big shift … a big change happening.

Are you hoping for a Finn-Raven reunion? Any theories on The 100‘s “big shift”? Drop a comment with your thoughts below.