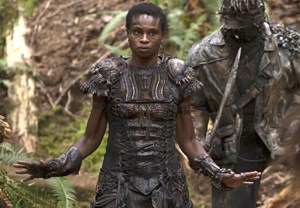 If The 100‘s new warrior queen Indra looks familiar to you, it’s probably because you’ve seen her before — a lot.

Just three months ago, Adina Porter was wigging out as True Blood‘s Lettie-Mae Daniels; prior to that, she was standing by Will’s side on The Newsroom as Kendra James. Now, the self-proclaimed “chameleon” is relishing her wildest role yet.

“I’m very much enjoying being physical, badass and fierce,” Porter tells TVLine. “I can’t help but strut in the outfit that I get to wear as Indra. I don’t know if I’m even Indra without that fantastic costume.”

And now that Lincoln’s been captured by Reapers, it could be up to Octavia and Indra to save the day — but can Octavia trust her new apparent new ally?

“With this kind of show — like in war and politics — one minute you’re someone’s friend, then the next minute, you’re their enemy,” Porter acknowledges, refusing to say exactly where Indra stands with Octavia. “When I say a line, I honestly never know if Indra is being sincere, or if we’re going to find out a few episodes later that she was lying.”

Either way, some serious fighting is in order, and Porter says she’s ready for anything.

“The fight coordinators on this show are magnificent … but I also show up with good material for them to work with,” she says. “I work out, I do yoga now, and I look around and at all these enormous guys I’m working with. I mean, have you seen Ricky [Whittle]’s body? No carbs for me at lunchtime!”

100 fans, do you think Indra can be trusted? Drop a comment with your thoughts on Season 2 below.