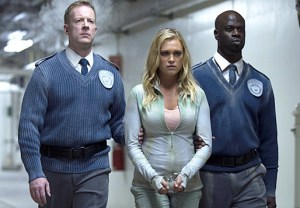 Let’s get one very important thing out of the way first: Everyone is alive. Literally everyone. Finn, Bellamy, Raven, Jaha — everyone who ended Season 1 on Death’s door is still with us as of the premiere, though they’ve all definitely seen better days.

Below, we break down the craziest twists from Wednesday’s episodes, then offer insight from the cast we gathered during a recent visit to the show’s Vancouver set:

WEATHER GIRL | Clarke appears to be playing nice at Mount Weather — and who wouldn’t with all that chocolate cake?! — but don’t expect her to give up on Operation: Get the Hell Out of There anytime soon. “It seems too good to be true,” Eliza Taylor says. “[The Grounders’] main fear is of these mountain men, and now that she’s inside … nothing adds up.” SPOILER ALERT: She will eventually leave Mount Weather and reunite with “a few of the old peeps,” though it won’t be all hugs and kisses. “Some of them are really good reunions, but some of them not so good,” she says.

PARENTAL CONTROL | Kane may have stumbled onto the kids at the perfect moment — pumping Tristan full of bullets, thus saving Finn and Bellamy — but the feel-good reunion pretty much ended there, as Kane took Bellamy into custody and informed him, “You are not in control here anymore.” So how will that relationship progress? Surprisingly, it sounds like Kane might soon see Bellamy and the others as equals! “There’s that slow realization that these kids have survived and done better than we may have done,” Henry Ian Cusick admits. “And a gradual acceptance and understanding that they’re pretty good.” Adds Bob Morley, “The 100 were a big part of Bellamy’s power, and now … he’s without them. So he’s kind of lost out there.” 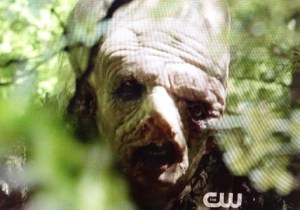 MAN OR MONSTER | Despite Octavia’s poison-induced pain, the season premiere was full of endearing Linctavia moments, as the Grounder-with-a-Heart-of-Gold tended to his wounded lover. Oh, and about that mutant Octavia saw in the woods (pictured right), Marie Avgeropoulos says he was merely a taste of what’s to come. “Something you’re going to see this season is a lot of different changes of creatures and environment,” she explains. Spending time with the Grounders will also help Octavia figure out “who she is a person and as a young woman. … She connects with them a lot more than her own people.”

BABY ON BOARD | Confused about that ending? Don’t worry, the mysterious baby cry Jaha heard aboard the Ark in the premiere’s final moments will be explained in Episode 2. It’ll also propel the former Chancellor into the next phase of his journey, which gets even more mind-blogging… if that’s at all possible.

Your thoughts on The 100 season premiere? Any predictions about the baby, the mutant or Mount Weather? Drop ’em in the comments section below.